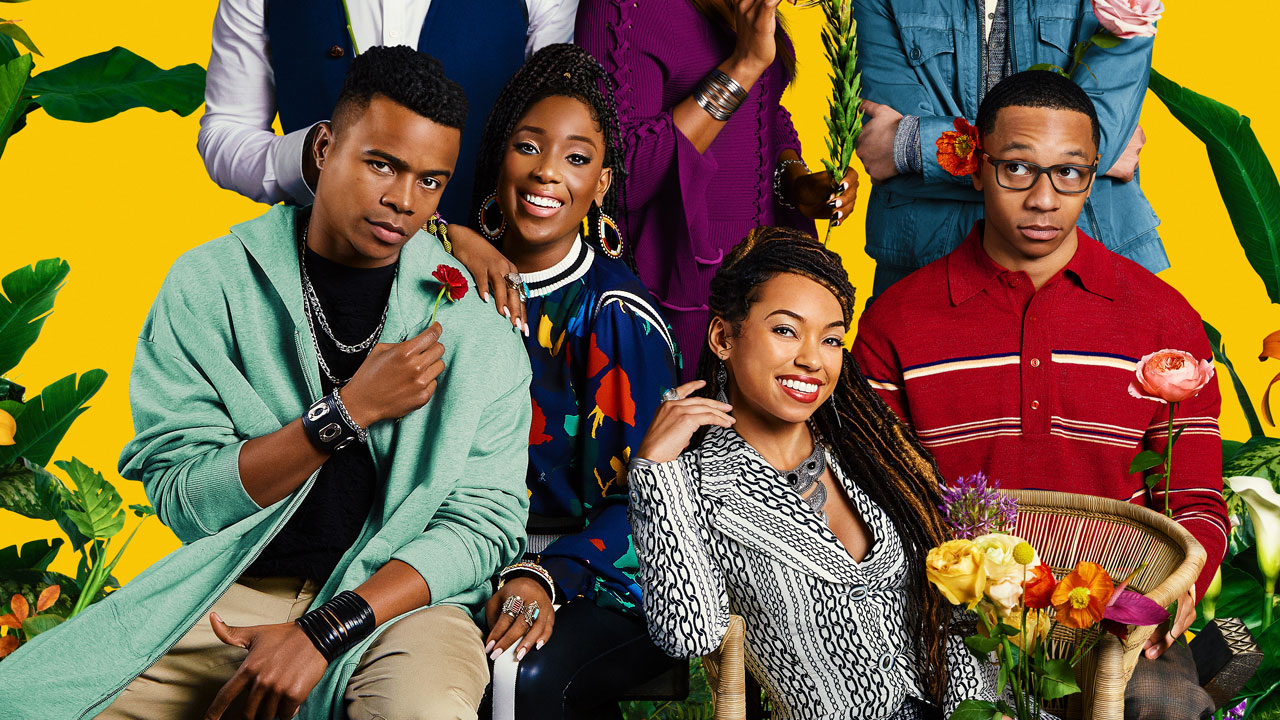 The reviews section on any given IMDB page is a great platform for people to unwittingly tell on themselves. If we truly live in an age of unprecedented media illiteracy, then the vindictive one-star reviews that litter the website might just be Exhibit A. Everyone’s entitled to their own tastes, but like a vengeful Yelp review, the scorched-earth (and often typo-ridden) remarks on IMDB tend to say more about these anonymous armchair critics than the actual work itself. Take Netflix’s DEAR WHITE PEOPLE, a television adaptation of Justin Simien’s celebrated 2014 indie film of the same name. An outspoken, irreverent, and supremely stylish exploration of contemporary Black identity and racial politics, DEAR WHITE PEOPLE positions itself from the outset as an instigator for passionate debate.

A one-star review for CHAPTER V, an episode written by story editor Chuck Hayward and Jaclyn Moore, betrays either the anonymous author’s total inability to process nuance or an unwillingness to truly engage with the issue. “Every single white character… is either a full on evil racist or a complete idiot who means well but still acts like a total racist… I don’t know anyone who actually used the word “woke” and I’m glad I don’t… Netflix has gone full SJW in the past few months. They deserve to lose business over this terrible content”. As self-aggrandizing as it might have been to hit that “publish” button, these knee-jerk surface level criticisms only serve to prove DEAR WHITE PEOPLE’s point— it’s impossible to have an actual conversation when one party isn’t actually listening.

Such reviews also show why artists like director Barry Jenkins are so necessary these days. We need filmmakers to extend empathy where audiences won’t; to keep hammering home the idea that there are actual people on either side of the argument… even when one side is definitively in the wrong. Jenkins understands that changing hearts and minds is only accomplished through dialogue and conversation, and listening is as necessary as speaking. This isn’t to say that dyed-in-the-wool racists and malignant ideologues should be given a platform for their bad-faith vitriol. Rather, for those whose hearts might still be changed, their inherent humanity has to be addressed so as to not foster the persecution complex that reinforces and inflames their opinions.

Set at the fictional Winchester University, ostensibly an affluent Ivy League college, DEAR WHITE PEOPLE follows a group of students actively working to further the conversation on race with white classmates rendered clueless by their privilege. CHAPTER V centers on Marque Richardson’s Reggie, a character carried over from Simien’s feature, who aspires to success as an app developer and an activist for social change. His natural charisma is complicated by the palpable presence of smug self-righteousness, shared by compatriots in the cause like Logan Browning’s Samantha White, a college radio host with piercing eyes devoid of pigment. Most of the episode finds Reggie and his crew gliding through campus, espousing the state of contemporary racial politics to anyone and everyone who will listen (and to those who won’t). Safely ensconced in this liberal arts bubble, they experience the opposite of their intended effect, encountering constant resistance that views them as annoying at best, and insufferable at worst. That all changes during a pivotal moment at a house party, where Reggie gets in an argument with a white classmate about his insistence on using the N-word while singing along to a hip-hop song. A physical fight breaks out and campus security is called, and Reggie experiences the visceral terror of having a gun pulled on him by an overly-aggressive (and unexpectedly-armed) officer who regards him as the sole threat. Reggie leaves the party physically intact but emotionally broken, rendered shattered and speechless by his demoralizing brush with police brutality and racial profiling.

Jenkins’ first stint directing for television finds him foregoing his evocative visual aesthetic in favor of the “house style” cooked up by Simien— a common practice for the medium so as to maintain continuity across episodes. The style of DEAR WHITE PEOPLE’s digital cinematography (fashioned in CHAPTER V by director of photography Jeffrey Waldron) is clean and bright, favoring warm light and naturalistic earth tones. A shallow depth of field and headroom-heavy compositions  inject some creative exaggeration into an otherwise-naturalistic approach. Other aspects, like a sequence where the characters break the fourth wall to proselytize to the viewer or even the percussion-heavy jazz score by Kris Bowers, lend a loose, casual air that allows the story to deftly elude the grasp of audiences who think they’re a step or two ahead of the storytellers.

As evidenced by CHAPTER V’s beginning with a James Baldwin quote and ending with Michael Kiwanuka’s single “Love & Hate”, DEAR WHITE PEOPLE is animated throughout by its ruminations on the particular complexities of the modern Black experience. It’s not hard to see why Jenkins agreed to direct this episode, despite the absence of an opportunity to put his own artistic stamp on the material. While the story allows for Jenkins to display a natural aptitude for humor that his feature narratives don’t otherwise provide, the primary emotional vessel on display is outrage— several generations removed from the passage of the Civil Rights Act, there’s a palpable sense that these characters can’t believe they still have to put up with this shit. Look no further than recent efforts to overturn hard-won voting rights, deliberately engineered to disenfranchise communities of color and suppress their vote; the battles thought to be already won fifty years ago are still being fought.

DEAR WHITE PEOPLE, especially as seen in CHAPTER V, walks a very fine dramatic line in fashioning itself as a satire; it must show that the outrage is justifiable enough to wield it as one’s entire identity while also critiquing the more-militant aspects of their persuasion campaign. Indeed, Jenkins’ particular grasp of empathy and its many nuances and complications makes for a rich deconstruction of the so-called “social justice warrior” decried by the aforementioned one-star IMDB review. CHAPTER V’s satirical focus lies not in the usual antipathies of intolerance, but on a particularly acute delusion fostered by the election of Barack Obama to the presidency: that we had entered a beautiful new post-racial era where the ascent of the first African-American to the Oval Office was somehow enough to heal the wounds of slavery and white supremacy. This delusion, sustained primarily by privileged whites in the wake of Obama’s election, was so quickly embraced because it absolved the believer of individual responsibility while “affirming” their (misguided) convictions in their own tolerance. Jordan Peele’s GET OUT, released the same year as this episode, illustrates this conceit rather brilliantly, with Bradley Whitford’s character proudly declaring to Daniel Kaluuya that he would’ve voted for Obama “a third time if (he) could”.

Though any delusions that Obama’s presidency somehow “fixed racism” have been shattered in the xenophobic wake of his successor’s “Make America Great Again” cult, their very emergence still leaves a thorny legacy that must be tangled with. Through the narrative framework of CHAPTER V, Jenkins makes his own attempt to wrestle with the matter, showing how the outrage these protagonists cultivate as their identity has a self-defeating effect: it makes their ability to foster genuine connection even harder, while leaving them shockingly vulnerable to the myriad injustices that dominate our newsfeeds. CHAPTER V in particular presents a spectrum of injustice that members of the Black community might encounter on any given day, be it the exhausting indignity of being pulled into yet another debate about how and when it’s acceptable for a white person to use the “N” word (answer: never), or the very serious matter of suddenly finding oneself on the business end of a weapon wielded by an aggressive authority figure with a twitchy trigger finger. The latter illustrates the life-or-death stakes of our continued inability to communicate; a seemingly-insurmountable bias built into the very DNA of American institutions that justifies the urgent calls for change while deflating any pretense that we’ve made serious progress towards this supposed “postracial” society.

Jenkins uses the central event of CHAPTER V — the argument over whether a white character can justifiably use the “N” word in the context of the lyrics to a hip-hop song — to illustrate how these delusions of equality can be just as debilitating as open hostility. Reggie’s sparring partner is a privileged white kid who presents as friendly and cognizant of racial politics, but nonetheless is quick to defend his alarmingly-casual (and repeated) use of the “N” word as a gesture of respect to the song’s “artistic intent”. He’s fully aware of the word’s history and corrosive effect, but his distorted perception of equality has him convinced that he’s doing the artist a favor by not censoring the work. What he’s really doing is wielding his misguided sense of victimhood as a cudgel, deferring to his ego instead of making the genuine attempt to listen to Reggie’s reasonable concerns. Indeed, the righteousness of victimhood is what allows some to rail against “cancel culture” without reflecting on their supposed misdeeds. They decry the Social Justice Warrior as its own brand of elitism, possessed by a “holier than thou” attitude that empowers the activist as judge, jury, and executioner. The phrase “when you’re used to privilege, equality feels like oppression” has been rather ubiquitous among online circles in recent years, and it feels particularly applicable in this context— reducing the efforts of progressivism to the “woke mob” allows the offending party to indulge in this persecution complex, and conveniently forget that this is all about accountability and speaking truth to power.

Jenkins’ approach benefits from the serialized television format, with the lack of a clear resolution enabling him to avoid any impressions of conclusive “preachiness”. He presents the situation in such a way as to concede the humanity of both parties without resorting to harmful “both sides”  equivocations, and then simply leaves the audience to pick up the pieces and figure out where they stand. Though his artistic signature may be subdued, Jenkins’ first stint in television represents real growth into new storytelling formats and aesthetic tones, while setting the stage for forthcoming, major works like THE UNDERGROUND RAILROAD.