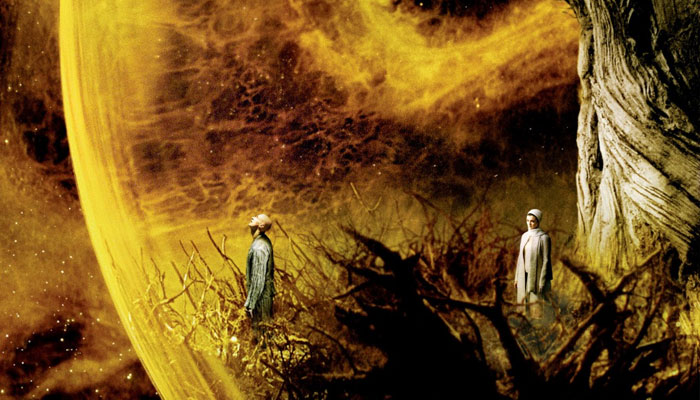 Entering one’s thirties can be a loaded rite of passage– the telltale signs of aging like grey hairs, chronic pain from old injuries, and a slowdown of metabolism usually rear their ugly heads for the first time.  It’s a time when many start to grapple with their future and the realism of their prospects and dreams.  Thoughts about one’s own mortality can move from the realm of the impossible to the all-too tangible, but most don’t have to deal with the spectre of death directly.  In the early 2000’s, director Darren Aronofsky was entering this particular life juncture for himself, and found himself confronting death when his parents were diagnosed with cancer.  While they eventually overcame their illnesses, the process left the young filmmaker trying to make sense of it all– caught between the worlds of faith and reason, his intellectual rationality couldn’t reconcile itself with the staggering unknowability of oblivion.  Words simply failed him; thankfully, pictures did not.

All this internal turmoil caused Aronofsky to turn to his old Harvard roommate, Ari Handel, in an effort to develop a story that properly expressed his sentiments about the great beyond.  Their efforts would result in Aronofsky’s third feature film: THE FOUNTAIN (2006).  An ambitious and overwhelmingly unique meditation on death, eternity, and undying love, THE FOUNTAIN is a pivotal work in Aronofsky’s canon.  It was received upon its release as an artistic misfire, but it’s clear now that THE FOUNTAIN was simply ahead of its time.  Pop culture during the 2000’s was defined by its materialistic flash and taste for gaudy excess, so in hindsight it’s perhaps understandable that audiences decked out in Tom Hardy tattoo shirts and pink sweatpants with “Juicy” on the butt were not exactly ready for the psycho-spiritual brew Aronofosky had concocted.  The success of PI (1998) and REQUIEM FOR A DREAM (2000) gave Warner Brothers the confidence to finance Aronofsky’s vision, setting him and his producing partner Eric Watson up with an exponential increase in budgetary resources to the tune of $75 million.  Complete with epic battle scenes, gigantic set builds and an all-star lead couple in Brad Pitt and Cate Blanchett, THE FOUNTAIN was shaping up to become Aronofsky’s first big Hollywood film.  The lifelong New Yorker even relocated to Australia to settle in for a long, arduous shoot.  Inevitably, the studio got buyer’s remorse, and when Pitt departed the project because Aronofsky wouldn’t accommodate his rewrite requests, they seized on the opportunity to shut a massively risky project down and cut their losses.  Despite all this, the project wasn’t completely dead in the water– Warner Brothers, to their credit, still believed in Aronofsky’s vision enough to leave the door open to a revival should he bring the costs down.  The wounded director retreated to his writing while re-immersing himself in his roots in the independent sector, trimming away unwieldy battle scenes to better hone in on THE FOUNTAIN’s key themes and ideas.  In doing so, Aronofsky was able to shave his budget down to $35 million.  By 2004, Aronofsky was off to Montreal, Canada with his second greenlight and a renewed conviction in his vision.

THE FOUNTAIN’s story arranges itself as a triptych, depicting a man named Tomas and his quest across time and space to conquer death and live forever with his beloved, Isabel.  Aronofsky sets the action in three distinct time periods– the 16th century, 2005, and sometime in the distant 2500’s– with the action and story beats arranged so that they repeat, overlap, and cascade upon in each other in such a way that suggests a circular temporal structure of reincarnation rather than a linear, forward-pushing timeline.  In the 16th century, Tomas is a Spanish conquistador who has traveled to the jungles of South America in a bid to find the Fountain of Youth and win the hand of his beloved Queen Isabel.  In contemporary 2005, he is a driven neuroscientist desperately searching for the elusive cure to brain cancer before it claims his terminally-ill wife.  In the 2500’s, he is a meditative zen astronaut, traveling through the cosmos in his bubble spaceship towards the dying star, Xibalba.  Known primarily at the time for his fierce portrayal as Wolverine in the X-MEN films, Hugh Jackman proves a revelation as the three distinct incarnations of Tomas– each more grief-addled and tortured than the last.  Rachel Weisz handles the luminescent complexity of Isabel’s three forms so effortlessly that it’s hard to imagine Aronofsky initially didn’t want her in the part; she was his girlfriend at the time, and was sensitive to the potential accusations of favoritism that her casting might imply– until Jackman was able to overcome his resistance and sway him.  Weisz ties her three roles as a Queen, a wife, and an ethereal angel together with a wide-eyed wonder at the prospect of confronting oblivion– she’s unafraid of the Great Beyond, seeing death not as an end, but as an empowering transformation that will enable her to discover the wider universe beyond our perception.  Indeed, her musing that “death is the road to awe” handily sums up THE FOUNTAIN’s fundamental message, giving the film the necessary conviction to uphold its distinct tone.  Through these two souls and their various incarnations, Aronofsky fashions a profound narrative that resonates at the innermost levels of the collective human experience, drawing inspiration from a wide range of resources like Renaissance art, Western religion, and Eastern philosophy and meshing it together into something that feels at once both impossibly familiar and jaw-droppingly alien.

By this point in his career, Aronofsky had cemented his core group of collaborators, both in front of and behind the camera.  This includes talent like Ellen Burstyn and Mark Margolis– Burstyn following her highly-praised turn in REQUIEM FOR A DREAM with her appearance here as modern-day Tomas’ compassionate and maternal boss, Dr. Lillian Guzetti, and Margolis as Fr. Avila, a Franciscan priest accompanying 16th-century Tomas to the Mayan jungles.  Behind the camera, cinematographer Matthew Libatique, production designer James Chinlund, editor Jay Rabinowitz, and composer Clint Mansell also return– their individual efforts coming together in sublime harmony.  Celluloid film is already prized for its organic nature (especially in relation to the clinical, sometimes-lifeless sheen of digital cinematography), but THE FOUNTAIN finds Aronofsky and Libatique imprinting the 1.85:1 35mm film image with an unusually-tangible degree of organic texture.  Extreme closeups reveal the fleeting effervescence of life itself via the fine hairs on skin and rough tree bark.  Indeed, Aronofsky and Libatique shed the gritty, grimy lo-fi texture of their previous collaborations for a timeless aesthetic that looks at the specter of death with a romantic eye, painting it as an unknowable force of impermanent beauty.  An evocative black/gold color palette unifies THE FOUNTAIN’s three eras, complemented by limited splashes of green and red.  A “starlight” motif drives the film’s approach to lighting, illuminating Chinlund’s sets in bright wells of concentrated spotlights or the warm, ambient glow of candles while puncturing the surrounding darkness with pinpoints of distant luminescence.  If Aronofsky harnessed the spirit of John Cassavetes with his rough-hewn approach to PI and REQUIEM FOR A DREAM, then THE FOUNTAIN channels the ghost of Stanley Kubrick with its plentiful one-point perspective compositions, abundance of overhead angles, and classical/formalist camerawork.  Rabinowitz brilliantly weaves the film’s three epochs together into a cosmic whole, employing classic techniques like match-cutting on action or similar shapes.  Naturally, a story like THE FOUNTAIN requires a substantial degree of visual effects, but Aronofksy’s roots as a scrappy microbudget filmmaker enable him to pull off his vision while both keeping costs down and ensuring his images’ technical integrity against the always-evolving nature of digital wizardry.  Aronofsky endeavors to capture as much of the film as practically as he can, utilizing only basic CGI techniques like compositing and rotoscoping.  THE FOUNTAIN’s most inspired touch in this regard is arguably its technique for realizing the vast backdrop of a dying nebula in space. To achieve this, Aronofsky employed macrophotography of various chemical reactions inside water– a process that reads as organic and entirely believable thanks to space and water’s shared physics.  In adopting this approach, Aronofsky was able to create realistic and astonishing visual backdrops for a fraction of the cost it would take for a computer to do the same.  Like Rabinowitz’s edit, Mansell’s already-iconic score unifies the disparate elements of THE FOUNTAIN into a singular entity, using romantic and intensely epic string arrangements played once more by Kronos Quartet as well as Scottish post-rock band, Mogwai.

As vastly different a film as it is to previous works like PI or REQUIEM FOR A DREAM, THE FOUNTAIN is nonetheless an inherently authentic portrait of Aronofsky’s distinct artistic character.  His intellectual, academically-minded and atheistic upbringing within a predominantly Jewish neighborhood and culture forms his lifelong search for the middle ground between faith and reason.  Despite opening with a verse from the Old Testament, the film takes great pains to ensure its narrative and thematic conceits can’t fit into a tidy box labeled for one particular religion– indeed, Aronofsky’s vision of Eternity marries the core spiritual tenets of Western and Eastern religions while also folding in elements of Kabbalah mysticism, Mayan creation myths and contemporary neuroscience into a singular cosmic experience.  In doing so, Aronofsky is able to capture the awe of oblivion, the afterlife, and creation itself without religious imposition.  Indeed, THE FOUNTAIN is the kind of film that a Christian, Muslim, or Agnostic alike could find profound spiritual resonance in.  Just as REQUIEM FOR A DREAM explored the dark side of the human experience through addiction, THE FOUNTAIN dissects ideas like death, grief, and religious fanaticism (seen best in a sequence set during the Spanish Inquisition).  Whereas his previous film’s depiction of chemical dependency made for an appropriately harrowing and dour viewing experience, THE FOUNTAIN’s treatment of its darkly existential themes is meant to inspire awe at the beauty of creation’s impermanence.  Death is a powerful force that we all must succumb to one day, but THE FOUNTAIN posits that Love is even stronger; death can be conquered– not by living forever, but by letting our divine capacity for love resonate through the ages.

THE FOUNTAIN premiered at the 2006 Venice Film Festival, generating a strong base of acclaim before its theatrical release.  Its domestic run, however, did not meet expectations– mixed critical reviews and poor audience attendance left THE FOUNTAIN unable to recoup half its production costs.  Critics admired the earnestness of Aronofsky’s ambition even as they dragged him for the film’s perceived failures, belittling his vision as a hodgepodge of religious gobbledygook that, while pretty to look at, made little to no narrative sense.  Time has revealed those sentiments to be shortsighted at best (and foolish at worst), as Aronofsky’s ambitious “failure” has only grown in esteem in the decade since its release.  Like a slow-blooming flower, THE FOUNTAIN’s multitudes of nuance and spiritual insight steadily unfold over time– each subsequent viewing drawing us deeper into Aronofsky’s vision, yielding ever-more elusive emotional truths.  These are the kind of ideas we expect to see from filmmakers nearing the end of their lives, not one barely into his thirties.  Remembering this, the spiritual profundity of THE FOUNTAIN becomes even more impressive.  Whenever “Best Of” film lists are compiled for the 2000’s (or the 21st century for that matter), THE FOUNTAIN almost always manages to achieve a respectable slot– even ticking upwards in rank every couple years as its ideas prove ever more timeless.  It may be one of the most misunderstood films of its decade, but THE FOUNTAIN is also one of its best.  For Aronofsky, it may not quite fully embody his aspirations as a cinematic masterpiece, but it is certainly a work that will stand the test of time– marking his transition from an upstart maverick to a mature artist in full command of his abilities.