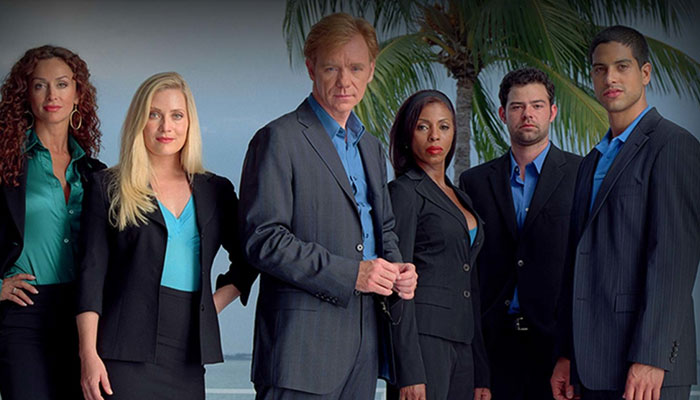 Generic police procedurals like CSI and LAW & ORDER are the bane of my entertainment existence.  Their popularity, quite simply, baffles me.  I’ve stayed away from CSI MIAMI in particular, mainly because there’s no physical way I can take actor David Caruso seriously.  He just seems so self-important and pretentious in return for a minuscule amount of talent.  I can back it up too—my college directing professor recounted a story to us in which on the set for his film that Caruso was in, Caruso was talking shit like a punk and almost got his ass handed to him by Forest Whitaker for the trouble.

Naturally, I was dreading having to watch director Rob Zombie’s episode for CSI MIAMI, “LA”, and my experience in finally doing so validated my preconceptions about the show as a whole.  But I certainly came away with questions: why would Zombie be involved in primetime trash like this?  Did he desperately need the work?  Or worse, did he legitimately like the show?  Objectively, “LA”’s story seems appropriate enough of a fit for Zombie’s sensibilities, given its excursion to Los Angeles and its dealings with the porn industry.  Television is a producer’s medium, with a director having to fit into a rigidly established aesthetic in order to maintain continuity across the series.  While Zombie tries to buck this by injecting some life and style into the proceedings, “LA” is ultimately just another forgettable episode of a forgettable television show.

CSI MIAMI has to be the most garish-looking show on TV.  None of this, however, is Zombie’s fault.  In attempting to convey a polished, colorful look, the visual team has gone completely overboard with a harsh, overlit lighting scheme and saturation dialed up to the point where the unnatural colors bleed and smear across the image.  Pointless time ramps abound in helicopter shots that try to mimic the work of director Tony Scott.  But it’s the camerawork that’s the biggest sin—there’s a constantly-dollying camera tracking left to right and back again like some ADHD yo-yo.  It’s easily the most obnoxious way to shoot a scene outside of the (shudder) circular dolly.

The set design is equally laughable, with a generically hi-tech field office that no city or state government in their right mind would ever begin to pay for.  I realize this is glossy primetime TV but is it too much to ask for a little bit of realism in our police procedurals?

The episode’s music is one area in which Zombie exerts a little bit of control.  Besides the show’s use of The Who for its theme song, Zombie incorporates 70’s folk like The Mamas and The Papas and punk like The Dead Kennedys to add a little bit of California flavor.  However, since this is primetime TV for idiots, he has to dumb down his selection and go with source cues that are way too on-the-nose (“California Dreamin”, and “California Uber Alles”).

As Zombie’s first foray into episodic television, “LA” seems to be a bid for mainstream relevance.  It’s the same kind of stunt directing that the mainline CSI series previously employed in 2005 when it hired Quentin Tarantino for its pair of “GRAVE DANGER” episodes.  Television isn’t a great forum to mount a comeback bid when your career is slumping, but at the very least it’s interesting that Zombie was compelled to try out other directing mediums to expand the scope of his craft.