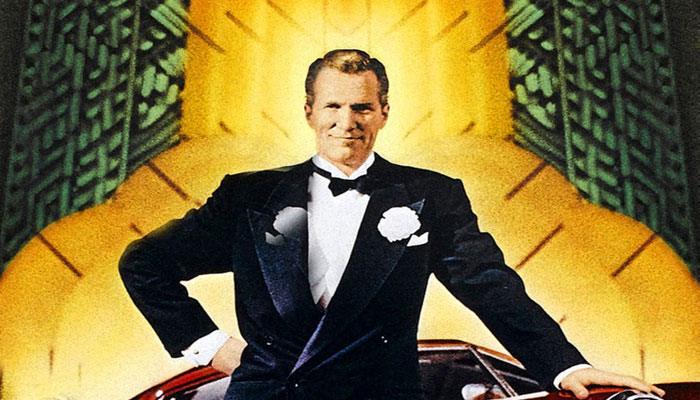 Despite the minor failure of 1987’s GARDENS OF STONE at the box office, director Francis Ford Coppola seemed to be experiencing a second wind.  Spurred on by the loss of his eldest son–a producing partner and car enthusiast– Coppola turned his attentions to a long-gestating passion project about a plucky entrepreneur’s quest to revolutionize the auto industry.  Titled TUCKER: THE MAN & HIS DREAM (1988), the film was first conceived by Coppola in childhood, and continued to occupy his interest as his career developed.  When it was finally released, the film was met with substantial critical praise that resulted in three Oscar nominations—most notably for Martin Landau in the Supporting Actor category.  Despite poor box office performance, Coppola suddenly found himself relevant again.

Set in Michigan during the year 1945, TUCKER: THE MAN & HIS DREAM tells the story of Preston Tucker (Jeff Bridges), a successful businessman and local celebrity who desires to change the car business with an automobile of his own groundbreaking design.  Painted as a virtuous, insightful and gracious family man, Tucker finds his character and his patience tested when disapproving Big Auto tries to shut his entire operation down.

It’s rare nowadays to have a protagonist that is so earnest and optimistic, with nary a character flaw.  It’s a credit to Bridges’ inherent likeability and talent that Tucker comes off as compelling as he does.  Bridges’ Tucker is a natural showman—a visionary with big ideas and an even bigger heart.  He draws inspiration from such forebears as Thomas Edison, and his obsession with detail plays like a midcentury Steve Jobs.  It’s an energetic, boyishly charming performance that helps sustain the film’s chipper tone without being off-putting to the cynical members of the audience.  It’s hard to imagine anyone else but Bridges playing the part, but interestingly enough, Coppola had initially envisioned the film decades prior with Marlon Brando as the lead.

Joan Allen, who previously worked with Coppola in PEGGY SUE GOT MARRIED (1986), has a much larger role to play here as Tucker’s eternally-supportive wife, Vera.  Allen carries herself with an elegant, feminine grace—a grace that gives strength to Tucker in his darkest moments.  Her sharp, porcelain features are easy on the eyes, but admittedly confounding to logic—she doesn’t appear many years older than the actors playing her grown children!

As I mentioned before, venerated character actor Martin Landau was nominated for a Supporting Actor Oscar for his performance as Abe, Tucker’s grumpy business partner and advisor.  Landau plays the character as an old New York Italian type—one that wouldn’t be out of place in THE GODFATHER series.  His grumpiness soon proves endearing, and he effortlessly becomes one of the film’s shining strengths.  It’s a nomination well-deserved.

Among the faces returning to the Coppola fold are those belonging to Frederick Forrest, Elias Koteas, and Dean Stockwell.  Forrest, who was the lead in 1982’s ONE FROM THE HEART, plays Eddie, another member of Tucker’s team.  His relation to the family isn’t very defined, but it appears that he’s the chief mechanic and a good-natured cynic.  Koteas plays Alex, an ambitious designer who quits the Air Force and shows up on Tucker’s doorstep to ask for a job.  His talented drawings soon earn him a spot as Tucker’s key designer.  Stockwell, who appeared as various bit characters in Coppola films past, assumes the towering personality of reclusive billionaire Howard Hughes in a short cameo.

Hughes seems to be an intriguing character in the minds of Coppola’s filmmaking contemporaries.  His close friend, Martin Scorsese, would of course go on to make THE AVIATOR (2004) with Leonardo DiCaprio as Howard Hughes during his Spruce Goose era (which also features in this film).

And finally, a baby-faced Christian Slater appears as Tucker’s ambitious son, Junior.  In his big screen debut, Slater shows a lot of promise, and it’s easy to see why he continued working after the fact.  Like Coppola himself, Slater’s talent seemed to fizzle out in middle age as well, and unfortunately Slater has since become more of a direct-to-video punch line than a prestigious actor of note.

Coppola re-enlists frequent Director of Photography Vittorio Storaro to capture the vibrant patina of Tucker’s experience.  The 35mm film is shot in the 2.35:1 anamorphic aspect ratio, lending an epic feel to a story about an equally epic life.   Scope is created through the use of sweeping crane shots, and Storaro uses strong yellow key light in several scenes to establish a golden, nostalgic tone.  Many sequences also adopt the conceits of early newsreel films, complete with kitschy black and white documentary footage and an overly earnest voiceover narration.    Production Designer Dean Tavoularis also returns, continuing the midcentury Americana aesthetic that Coppola sustained in his films throughout the 1980’s.  Overall, Coppola and company are able to make such a plucky character like Tucker succeed due to their embrace of an overtly kitschy, tongue-in-cheek tone.

For the music of TUCKER: THE MAN & HIS DREAM, Coppola eschewed his regular collaboration with his father, Carmine, in favor of working with Joe Jackson.  Jackson creates a plucky, big-band sound that fits in with Tucker’s grandiose personality and viewpoint.  The many period details are reinforced with the incorporation of a variety of ragtime and swing source cues that meld well with Jackson’s original score.

The late 1980’s and 1990’s saw Coppola tone down his experimental explorations, but TUCKER: THE MAN & HIS DREAM does feature an interesting new take on that time–honored cinematic shorthand: the split-screen telephone conversation scene.  Instead of simply using an optically-printed line down the middle to separate two simultaneously-occurring moments in space, Coppola uses negative space in the frame as a canvas on which to superimpose the other side of the conversation.  This works substantially better than it sounds in print, trust me.  It’s an intriguing way to subvert one of cinema’s most basic examples of visual shorthand, which can undoubtedly be traced to Coppola’s lifelong attempts to redefine cinematic language.

It’s worth noting that Coppola’s good friend George Lucas is credited as an executive producer.  This simple credit belies a bigger story, where after Coppola’s previous attempts to get the film made had ended in failure, Lucas rescued the project by setting it up at his own production company (Lucasfilm) and financing it himself.  It ultimately became a losing hand for Lucas, as the film fared poorly at the box office.  At least the critics appreciated it; I don’t think Lucas ever lost any sleep over misplacing a couple million dollars.

For our purposes, TUCKER: THE MAN & HIS DREAM is an intriguing insight into Coppola’s psyche, almost like a heavily-disguised biopic of the man himself.  Both men are blessed with large families that they entrust their life’s work with on a regular basis—Tucker creates and executes his designs with his family in his own home, and Coppola frequently utilizes father Carmine, daughter Sofia, sister Talia Shire, nephew Nicholas Cage and others in his films.   In addition, both men see themselves as the little guy that must do battle with overbearing corporate interests out to squash their vision.  And both men ultimately prevail by sticking to their guns and coming out the other end with an inspiring product to show for their efforts.  Coppola must have felt a great sense of relief when the film was well-received by critics—in a strange way, the warm reception validated his entire life story.

As a particularly brutal decade for Coppola’s reputation came to a close, the director was approaching middle age, and was beginning to think about his legacy.  To date, the majority of his studio filmmaking experiences had been difficult, if not absolutely dismal.  Coppola finished TUCKER: THE MAN & HIS DREAM thinking it was going to be his last Hollywood film.  He had diversified, branching out of film by launching his own lifestyle brand that included wine amidst other things.  He imagined himself continuing to make movies, but of the experimental independent kind.

Ironically, his studio days were far from over.  In the 1970’s, he was considered untouchable, but how would time judge him now, in light of the string of misfires that generated a massive debt that he had still yet to pay off entirely?   All of these concerns coalesced to form a desire to do something Coppola thought he’d never seriously do: tackle a third GODFATHER film.

TUCKER: THE MAN & HIS DREAM is currently available in high-definition streaming via Netflix.