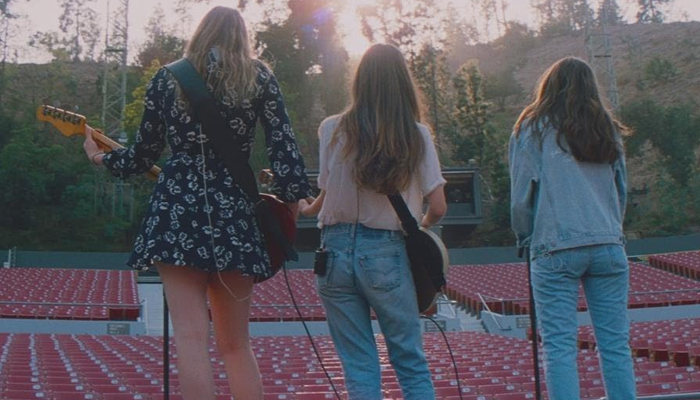 Following their series of collaborations throughout 2016 to support the new album “Something To Tell You”, director Paul Thomas Anderson and the buzzy rock band Haim would reunite for yet another music video, released right in the middle of PHANTOM THREAD’s awards season campaign.  The song— “NIGHT SO LONG” — is a spare, gorgeously haunting piece that calls for a matching visual treatment, which Anderson delivers in the form of a live performance during Haim’s sound check and subsequent concert at the famed Greek amphitheater in Los Angeles.  Following in the minimalist tradition of Anderson’s recent music video work, “NIGHT SO LONG” uses its simple construction to better access and capture the transcendent joy or fleeting rapture of musical expression.

Shooting in a low-contrast style with natural light, Anderson — likely operating the camera himself — initially captures the Haim sisters as close-up faces singing into a microphone.  There is little to no context, until a hard cut to a wider shot reveals the girls are performing on a stage by the light of the low-hanging sun. Anderson then shows us the empty amphitheater sprawled out before them, before a hard cut drops the veil of night on top of them and fills the seats with a crowd of fans waving their phones.  The piece ends where we started, back on a closeup of the band as they finish their sound check, albeit with the audio swapped out for that night’s live performance— leaving us with an invisible crowd of cheering ghosts while the sisters resign themselves to their introspection.

Anderson’s recent string of minimalist music videos differentiate themselves from the pack by embracing subtlety and nuance over flash, or ideological concepts over technical ones.  It’s a testament to his confidence and skill as a filmmaker that he’s able to so quickly and succinctly convey the breadth of his artistic signatures in the space of 5-6 cuts, while still ceding said signatures to the back seat in order to direct our focus onto the band’s own artistry.  The track is a beautiful, yet unexpected closer to an otherwise infectiously-energetic album, as is Anderson’s visual realization of the emotional truths behind it.

Beyond its immediate pop culture value, videos like “NIGHT SO LONG” stand to remind us of their creators’ continually-evolving relationship to the cinematic medium; that even brilliant and insanely-accomplished directors like Anderson are still finding new avenues of expression within it disproves the idea that the cinema is an outdated art from best relegated to the twentieth century.  Indeed, as long as there’s practitioners like Anderson, the medium still has plenty of life in it yet.

HAIM: “NIGHT SO LONG (LIVE AT THE GREEK)” is currently available via the YouTube embed above.