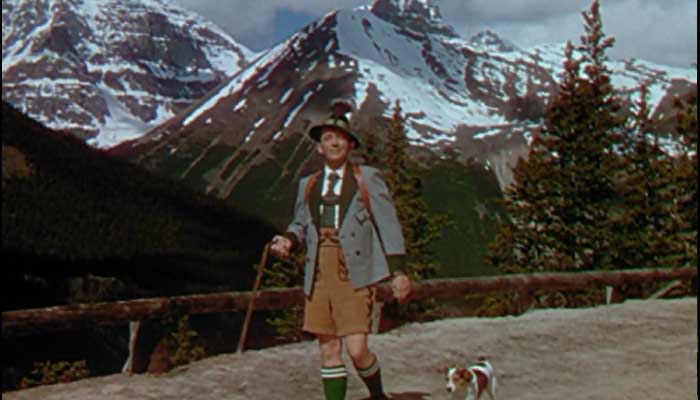 Director Billy Wilder’s Oscar wins for Best Picture and Best Director for THE LOST WEEKEND (1945) positioned him as not just an important dramatic director, but one of the most valuable filmmakers in Paramount’s stable.  Like many other directors who’ve been bestowed with The Golden Statue, the occasion marked a profound transition in both Wilder’s artistic and personal life.  At age 40, he was just entering middle age and grappling with all the malaise and neurosis that comes with it– including a divorce from his first wife, Judith Coppicus.  Wanting to capitalize on his creative hot streak, Wilder immediately went back to work with his writing/producing partner Charles Brackett on a script about American troops stationed in Europe following World War II, but his research trips to German concentration camps left him so disheartened that he abandoned the project altogether in favor of pursuing something light and carefree (1).  He felt himself longing for the Austria of his youth– long before war and depression had ravaged it to ruins– and he subsequently set his sights on a light-hearted musical comedy he called VIENNESE STORY, but would come to be later known as THE EMPEROR WALTZ (1948) (1).  When Wilder and Brackett managed to secure legendary crooner Bing Crosby (who was at the time considered Paramount’s top star), the film was able to come together fairly quickly.  THE EMPEROR WALTZ represents several firsts in Wilder’s body of work– his first color film, his first film set abroad since 1934’s MAUVAISE GRAINE, and his first musical– but it’s also his first stumble after a string of increasingly solid works.

Wilder’s vision of THE EMPEROR WALTZ depicts turn-of-the-century Vienna as an idyllic, mountainous land populated by innocents untainted by the devastation of world war.  Crosby is Virgil Smith, a fast-talking American salesman who’s come to town to sell a new musical playback device called The Gramophone to Emperor Franz Josef (Richard Haydn under what must be a pound of heavy makeup and prosthetics).  Virgil’s efforts are derailed when the beloved dog he’s brought along with him gets entangled in a nasty spat with a purebred poodle belonging to the glamorous socialite Johanna Franziska (Joane Fontaine).  They initially don’t get along very well, but this decadent world proves as irresistible to Virgil as his soothing singing is to Johanna.  What follows is a confectionary comedy about class and old-fashioned European notions on breeding.  THE EMPEROR WALTZ is technically a musical, but not so much in the traditional sense in that there are very few song and dance numbers.  Instead of bombastic and expansive set pieces, Wilder takes a quieter, playful approach (like in a scene where Crosby is joined in song by a supporting chorus of his own yodels echoing off the mountainside).

To shoot his first film in color, Wilder turns not to his longtime cinematographer John Seitz, but to Oscar winner George Barnes, who had previously lensed Alfred Hitchcock’s REBECCA (1940) and SPELLBOUND (1945).  THE EMPEROR WALTZ certainly resembles that old-school Hollywood soundstage aesthetic: bright lights, soft/gauzy focus, and a copious amount of rear projection process shots for “exterior” sequences.  While Wilder’s visual aesthetic is relatively anonymous by design, there are a few touches that bear his mark– such as the noir-esque light cast by venetian blinds (which looks somewhat garish when rendered in candy-coated Technicolor).  There’s a distinct emphasis on lavish production values at play here, with Wilder’s camera more active than usual– he employs swooping crane shots, smooth dollies, and even high-velocity whip-pans of the type that Martin Scorsese would later incorporate into his own aesthetic.  Wilder’s minimalistic approach to coverage, as informed by longtime editor Doane Harrison, alternates between wide masters that show off the ornately stuffy production design by Hans Dreier and Franz Bachelin and sustained closeups that allow us to fixate on the tiny details of the Oscar-nominated costumes by the legendary Edith Head.  Just as he traded in his longtime cinematographer for a new collaboration, so to does he forego a musical score by frequent collaborator Miklos Rosza in favor of a regal suite of cues of Victor Young.  Young’s lavishly-gilded original orchestrations mix in as effortlessly with well-known classical waltzes as they do with Gioachino Rossini’s “William Tell Overture”, employed during a comic chase sequence.

THE EMPEROR WALTZ places one of Wilder’s most prominent thematic fascinations front and center: the eternal clash between the haves and the have-nots.  Whereas his previous two films tackled the American middle class (a social grouping one could describe as the “have-enoughs”), this film finds Wilder flipping MAUVAISE GRAINE’s dynamic of a rich boy slumming it with some street hoods- portraying Crosby’s Virgil as the muckety-muck everyman trying to gain a toehold in an arrogant European aristocracy.  The subplot with Virgil and Johanna’s dogs hinges on the contrasting dynamics of “the mutt” and “the purebred”, becoming a conduit for a larger exploration of Victorian social hierarchy.  Crosby’s huckster character is positioned as the hero, which paints the members of the Viennese aristocracy as villains by default.  The rich are also portrayed as depraved in regards to their virtues, with the money-minded, shameless social-climbing character of Baron Holenia (Roland Culver) being a particularly strong example.  Additionally, THE EMPEROR WALTZ provides ample opportunity for Wilder to indulge in the iconography of uniform– the male members of the aristocracy all seem to wear extravagant military garb while Crosby dresses himself up in a stereotypical lederhosen get-up to fit in amongst the common men from the nearby village.

For a film so admittedly inoffensive and conventional, the production of THE EMPEROR WALTZ was surprisingly turbulent.  Wilder and company shot in Canada, where any cost advantages it offered over other locales were soon negated by budget and schedule overruns (1).  For instance, pine trees were reportedly flown in from California and planted on-location at great expense.  Crosby was reportedly difficult during the shoot, refusing to take direction from Wilder or cues from his costar Fontaine (1).  Though THE EMPEROR WALTZ was shot in 1946, immediately following THE LOST WEEKEND, the film would not be released for two more years.  Wilder kept having major problems during the post-production process, one being that he apparently didn’t like how certain colors looked when they were rendered in Technicolor (1).  Though he was ultimately dissatisfied with the final product, THE EMPEROR WALTZ was received quite warmly by the critics, and would even accumulate Oscar nominations for Head’s costume design and Young’s score.  Time hasn’t been as kind to the film, relegating it to the bargain bin of Wilder’s forgotten minor works.  Indeed, it’s the cinematic equivalent of candy– bright, colorful, sweet, and completely devoid of nutritious value– but perhaps that’s the point.  After the shadowy gloom of both his last few films and real events on the world stage, THE EMPEROR WALTZ serves as something of a palate cleanser for Wilder and his audience.  Above all, the film is a pure escapist fantasy– one that mercifully allows Wilder to return, however briefly, to a world he once loved that no longer exists.

THE EMPEROR WALTZ is currently available on standard definition DVD via Universal.