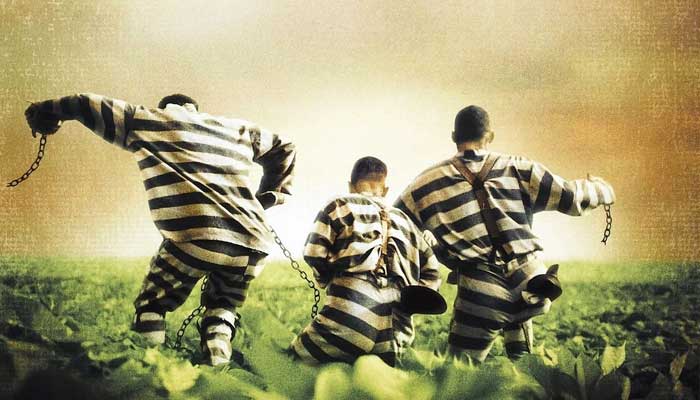 It was around the year 2000 when I started really becoming cognizant of cinema as a cultural phenomenon.  Sure, I knew everyone liked movies, and many of them liked the same movies I did, but at the age of 14 I was growing more aware of a world of cinema outside my own perception.  A small film I had never heard of before, O BROTHER, WHERE ART THOU? was released that year and caused a modest sensation.  One of my school teachers even used the film’s soundtrack to show us examples of historical folk songs like Harry McClintock’s “Big Rock Candy Mountain”.  Everywhere I went, everyone seemed to be talking about the film and its now-legendary soundtrack.  I had no clue who the Coen Brothers were at the time, and I wasn’t particularly moved to see the film until much later, when I was in college.

Seven features into their career, Joel and Ethan had managed to to carve out their own distinctive sub-genre of films– an aesthetic marked not by an immediately identifiable visual style, but by a sardonically playful approach to story and character.  Music served a major purpose in that regard, often acting as a subtextual thematic device but not yet as part of the narrative itself.  As the world celebrated the dawn of the 21st century, the Coens embraced their growing reputation as cinematic stewards of the American musical tradition by looking back on the early years of the 20th– specifically, the Mississippi Delta during the height of the Great Depression.  Their eighth feature– O BROTHER WHERE ART THOU?– would borrow so heavily from the structural framework of Homer’s ancient epic “The Odyssey” that Homer himself is given a co-writing credit in its telling of the story of three escaped convicts using the popularity of dustbowl folk music to seek treasure and return home to their families.  Released by their frequent production collaborators Working Title Films in the year 2000, O BROTHER WHERE ART THOU? marks another significant hit in the Coens’ filmography– one that, like THE BIG LEBOWSKI before it– would send ripples through the fabric of American pop culture itself.

Taking its title from the movie-within-a-movie in Preston Sturge’s SULLIVAN’S TRAVELS– the latest bit of inspiration the Coens have taken from that particular film throughout their filmography, O BROTHER WHERE ART THOU? finds the brothers working with Hollywood megastar George Clooney for the first time.  Clooney plays Everrit McGill, a slick and conniving con-man with an unhealthy affection for pomade.  As the Depression-era stand-in for THE ODYSSEY’s Ulysses, Clooney has the unenviable task of embodying the film’s heart and soul, but in his efforts he manages to find a special kinship with the Coens’ distinct worldview– kicking off a string of buffoonish Coen rascals that deliberately play against his polished, leading-man image.  Coen regulars John Turturro and John Goodman appear as Everritt’s right-hand man, Pete Hogwallop, and the treacherous cyclops bible salesman named Big Dan Teague, respectively.  Both men are entirely comfortable within the Coens’ quirky style of filmmaking, and channel it into larger-than-life performances.  Neither man finds in their role a career-best or particularly memorable persona, but both give the entirety of themselves over to the brothers’ idiosyncratic vision.  Rounding out the central trio of escaped convicts is seasoned character actor Tim Blake Nelson as Delmar O’Donnell.  To date, this is his only appearance in a Coen Brothers film, somewhat of an oddity given the brothers’ propensity for re-using talent.

A few other familiar Coen faces emerge, including Charles Durning and Holly Hunter.  Durning, who played the titular suicidal CEO in the THE HUDSUCKER PROXY, assumes the affectation of a bloated, aristocratic dandy in his portrayal of craven bureaucrat Pappy O’Daniel.  O’Daniel is a broad stroke of a character, relying on our recognizance of the “desperate-for-votes incumbent politician who’s up for re-election” archetype, but Durning nevertheless makes the role his own.  Holly Hunter, who hasn’t been seen in a Coen film since 1987’s RAISING ARIZONA, has a relatively small role here as Penny, Everritt’s estranged wife.

From the first frame on, O BROTHER WHERE ART THOU? immediately distinguishes itself as one of the Coens’ most visually-stylized films to date.  The dawning of the new millennium brought with it major advances in digital filmmaking technology, and while the film was shot on old-fashioned 35mm celluloid, its cinematography nevertheless achieves one of the earliest distinctions of the digital age– the first American motion picture to be color-timed and mastered via a digital intermediate.  The process of scanning film into digital files that can be endlessly manipulated and stored is commonplace now, but O BROTHER WHERE ART THOU?’s adoption of DI technology was, at the time, truly unprecedented.  This choice allowed the Coens and their cinematographer Roger Deakins full control over the color grading of the image, which takes on a washed-out, gold & tobacco patina after they were able to isolate and reduce the saturation of blues and greens.  This earthy, impressionistic color palette recalls the monochromatic texture of old photographs from the era, while their first-time use of the 2.35:1 aspect ratio makes for wider, inherently-cinematic compositions.  Energetic camerawork proudly shows off returning production designer Dennis Gassner’s authentic, well-worn patina, which evokes the cracked, warbly texture of the gospel folk tunes that inform the film’s musical soul.

Leaving a legacy arguably larger than O BROTHER WHERE ART THOU’s cinematography– at least in the eyes of the public– is the soundtrack.  Returning musical team Carter Burwell and T-Bone Burnett’s eclectic musical palette provides a brief, yet sprawling survey of Depression-era American folk music while also singlehandedly kick starting a popular resurgence in contemporary pop.  Indeed, Harry McClintock’s hobo anthem “Big Rock Candy Mountain” probably hadn’t been enjoyed at this wide a scale since the Great Depression.  The inspired mix of blues, religious hymnals, Appalachian mountain folk and bluegrass drives the film with a lyrical, rollicking energy that reinforces the film’s central theme of music being an agent of personal redemption.  The soundtrack proved so popular upon the film’s release that it’s said to have surpassed the success of the film itself, selling five million copies in its first year and earning five Grammys.

O BROTHER WHERE ART THOU? deals in many themes and ideas that the brothers had explored to varying effect in previous films, putting a particular emphasis on references to the bible.  The characters’ spirituality and remarks on scripture are naturally incorporated into the story, thanks to the evangelical ideology that sculpts the social landscape of the Mississippi Delta.  The outsider perspective that guides the Coens’ work is also present here in its portrait of three escaped inmates on the run and ostracized by society at large.  The characters that inhabit this world belong mostly to the common class, a demographic predisposed to lionizing Everett and his gang as folk heroes, out to stick it to fat-cat bureaucrats and expose the absurdity and wastefulness of the concentrated pockets of wealth that dot the Delta.  The Coens never let the proceedings get too serious, subverting the weight of the central quest narrative at every turn with exaggerated minor characters and old-fashioned slapstick humor.

O BROTHER, WHERE ART THOU? premiered in competition at the Cannes Film Festival, which by now had become almost standard procedure for the release of a new Coen Brothers film.  Save for one notable exception in Roger Ebert, the film received warm reviews from critics who appreciated the brothers’ effortless transition into an epic story scope, as well as their pioneering use of digital intermediate technology and realistic implementation of computer-generated imagery.  Most of all, they simply appreciated how fun it all was, and their praise helped propel the film t0 sleeper-hit status at the box office, earning back almost triple of its $26 million production budget.  The film received two Oscar nominations– one for Joel and Ethan’s creative adaptation of Homer’s epic poem, and the other for Deakins’ cinematography.  The mainstream success of O BROTHER WHERE ART THOU? is evidence of the Coens hitting their stride, having delivered yet another bonafide masterpiece to their already impressive body of work.

O BROTHER, WHERE ART THOU? is currently available in high definition via Touchstone.