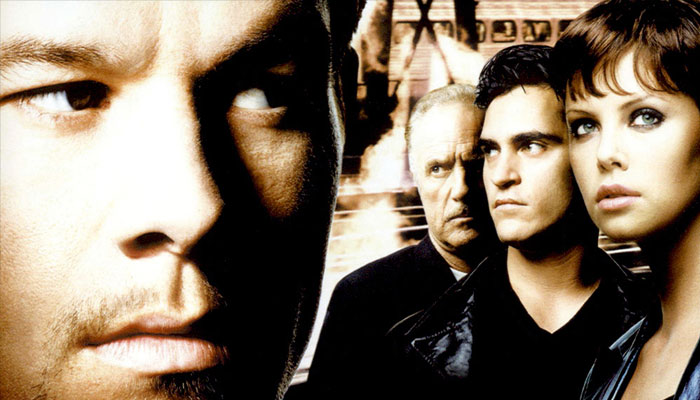 As an independent filmmaker, the hardest part about making a film is raising the money.  Studios have the luxury of hundreds of millions of dollars to funnel into their development slate, while most independents have to beg, borrow, and steal for meager budgets.  In the days before digital democratized the medium and dramatically lowered the cost barrier, most of these indie mavericks would go years between projects.  As a staunch advocate for traditional celluloid acquisition, James Gray is certainly no exception to this phenomenon.

It was a full five years after the release of his debut feature, LITTLE ODESSA (1994) until he was able to channel its successes into the making of his follow-up.  That film, 1999’s THE YARDS, was a dramatic upscaling of Gray’s vision and scope and enjoyed the participation of an eclectic, dedicated cast of famous faces.  With his second feature, Gray continues to bring his all to every effort, and delivers a riveting tale of bureaucratic corruption and conflicted loyalties.

Leo Handler (Mark Wahlberg) is a small-time crook, recently released from a stint in jail for stealing a couple cars.  He may be a tough guy on the outside, but he’s got a heart of gold.  When he returns to his small family in Queens, he’s given a new lease on life in the form of working for his Uncle Frank (James Caan), a fiercely competitive contractor for New York’s subway transit authority.  Dismayed at the time and cost it would take to go to mechanic’s school before he would begin working, Leo begins shadowing his cousin and Frank’s sales executive, Willie Guiterrez (Joaquin Phoenix).  Before he knows it, Leo finds himself deep in Willie’s world of shady back-room deals and nocturnal sabotage raids on rival firm’s trains.  When a routine raid goes awry and ends in the death of a yard operator and the maiming of a police officer, Leo is pinned for a crime he didn’t commit and must clear his name– even if it means betraying his own family.

THE YARDS is an intriguing story that deals heavily in Gray’s thematic preoccupations.  Based off the strength of his script (which he co-wrote with Matt Reeves of CLOVERFIELD fame) and LITTLE ODESSA’s success, Gray was able to assemble a truly fantastic cast.  It also helped that the infamous Hollywood producing powerhouses, The Weinstein brothers, threw their significant amount of clout around to get the film made.

Fresh off his career-making performance in P.T. Anderson’s BOOGIE NIGHTS (1997), Wahlberg continues to shed his cheesy “Marky-Mark” persona and deliver a powerful, understated performance.  His peach-fuzz-goatee’d ex-con projects a quiet intensity, expressed primarily through low-volume mumbles and keen observation.  He evokes a considerable amount of sympathy for his character as a guy who’s just trying to do the right thing, but can’t help but get drawn into trouble by those closest to him.

Conversely, Joaquin Phoenix is a broiling, brooding presence in one of his best early-career roles.  A year later, he would gain worldwide recognition for his villainous turn in Ridley Scott’s GLADIATOR (2000), but his antagonist here is much more complex and interesting.  His Willie Gutierrez is a slick, oily devil in a suit who’s proud of his sales prowess and even prouder of his criminal cunning.  When his actions kickstart a chain reaction of trouble, his true character comes out– that of a desperate coward who will do anything to cover his ass, even if it means betraying his own family.  THE YARDS is Gray’s first collaboration with Phoenix, which has since blossomed into one of the tightest director/actor duos since Martin Scorsese and Robert DeNiro (or Leonardo DiCaprio for that matter).

James Caan, who lately seems big into appearing in the early works of directors (see Michael Mann’s THIEF (1981) and Wes Anderson’s BOTTLE ROCKET (1996)), gives a layered, nuanced performance as Frank, the king of his own subway mini-empire.  It reminded me a bit of Paul Newman’s burdened anti-hero in Sam Mendes’ ROAD TO PERDITION (2002) in that he’s an honorable crook whose strength stems from his family and his status as patriarch.  However, he’s not afraid to do what has to be done, especially when it comes to ensuring the survival of his business.  With his dignified mustache and burly, tough guy mentality, Caan projects an authentically East-Coastal, lived-in aura.

Despite fashioning his stories in a primarily male-oriented setting, Gray shows considerable perception when it comes to sketching out his female characters, aided by an incredible eye for casting.  Charlize Theron, in her short black hair and thick eyeliner, completely disappears into her role as Erica, the woman at the center of a love triangle involving Leo and Willie.  She’s as tough and gritty as the guys, but doesn’t lose her inherent femininity in the process.  As Leo’s mother, Ellen Burstyn turns in a powerful performance as a woman broken-hearted by her son’s descent into crime.  It’s not the usual stock character, however– she’s quiet, yet firm in her convictions, which makes her arc so compelling.  Her reaction to first seeing Leo after the media has tagged him as a potential cop killer– covering her face in shame and turning away to sob— is one of the most arresting moments of the film, and shows why Burstyn is quite simply one of the best.  Rounding out the rest of the female characters is Faye Dunaway as Kitty, Frank’s strong-willed wife.  I didn’t recognized her at first, as I’m not used to seeing Dunaway as an older woman in thick glasses, but she gradually reveals herself to be a significant character in her own right– just as powerful and influential in matters of the family as her husband is.

Throughout all his films, Gray has cultivated a very distinct aesthetic, which solidified into its current incarnation beginning with THE YARDS.  The luxury of a higher budget allowed Gray to pour a significant amount of resources into the look of the film.  Collaborating for the first time with the legendary, late Director of Photography Harris Savides (rest in peace, big guy), Gray substantially upgrades his style.  Shot on 35mm film in the 2.35:1 anamorphic aspect ratio, Gray and Savides create a gritty, autumnal look that’s quite beautiful.  Savides’ signature naturalistic lighting gives the image a high contrast and even colors that draw from Gray’s preferred black/brown palette.  Indeed, the entire picture seems to bathe in a faint sepia tone that suggests a worn-out photograph.

Gray is also one of those rare directors who uses his visual style as a way to wordlessly convey deeper truths and subtext.  And not just in his camera movements (which are a strategic mix of static, dolly and slow zoom shots), but in his framing and lighting.  I’ve written before about Gray’s tendency to compose shots through a framing device such as a doorway or a window, but THE YARDS is the first instance where I became aware of why he chose to shoot in that way.

I previously made the observation that Gray’s plots hinge on a strong family dynamic that’s firmly ensconced in the rituals and customs of its European heritage.  Because of the insular nature of these relationships, Gray invites us to become passive observers, and not active participants.  By composing shots as if the audience is physically distanced and/or blocked from the characters, and suggesting that the characters don’t know they’re being observed, Gray creates an intimate, breathless story that holds us at arm’s length.  It’s not a cold distance (like the work of David Fincher) but a warm one that engages us in the story while simultaneously suggesting that we’ll never truly be a part of their world.  That’s why a cathartic, brutal slugfest between Leo and Willie is staged from a distance, in long un-broken takes– you’re not a part of their circle, so you don’t get to step into the ring with them.

Another visual component that Gray uses to a subtly rich effect is shadow.  Gray’s shadows are deep and inky, almost like a void.  The color black is just the absence of light (and by extension: of truth), an idea that informs Gray’s placement of shadow in the frame.  Silhouettes and backlit figures suddenly take on exaggerated, poetic meaning in an aesthetic that’s spare in its stylings.

About three quarters of the way through the film, there’s a scene where Willie comes knocking on Erica’s door and tries to falsely persuade her that he’s not the one who’s responsible for the train yard killings.  When it came to lighting the scene, Gray and Savides set up an overhead key light that throws Phoenix’s eyes into deep shadow.  Because Erica (and the audience) can’t see any semblance of truth coming from the blackness where his eyes should be, his over-articulated claims of innocence ring false.  Our eyes are windows into our souls by which we’re able to discern truth, so obscuring the eye likewise suggests an obscuring of truth.  It’s an incredibly subtle and effective technique, and one that I expect Gray to continue using.

Gray also teams up with Howard Shore to create a subdued, yet rich score that fits the film.  Comprised primarily of strings and ambient tones (with a little oboe or clarinet thrown in), the music appropriately conveys the stakes and gives the film a distinct New York flavor.

THE YARDS shows considerable growth for Gray as a filmmaker.  The film retains some earlier directorial stylings fromLITTLE ODESSA (all lower-case titles and a gritty outer-borough NYC setting), but also expands the scope of his story to focus not just on familial conflict, but on bureaucratic corruption and its subsequent social unrest.  Gray paints his characters like subway system mafiosos in the many scenes of back-room dealings and favor-cutting with police.

Very little about the film rings false, save for some exposition-heavy dialogue in the film’s beginning.  THE YARDS is a powerful morality tale about having to choose between allegiance to family or to justice, a conundrum brought about by a single operating principle: “don’t be a fucking snitch”. It’s a compelling crime drama that hasn’t aged a day in the nearly twelve years since its release.  Just like LITTLE ODESSA before it, THE YARDS deserves at least a closer look, if not a full re-appraisal of its place within cinema– not as a bargain-bin gangster film, but as a modern classic.

THE YARDS is currently available on high definition Blu Ray (albeit in a cropped transfer) from Miramax.