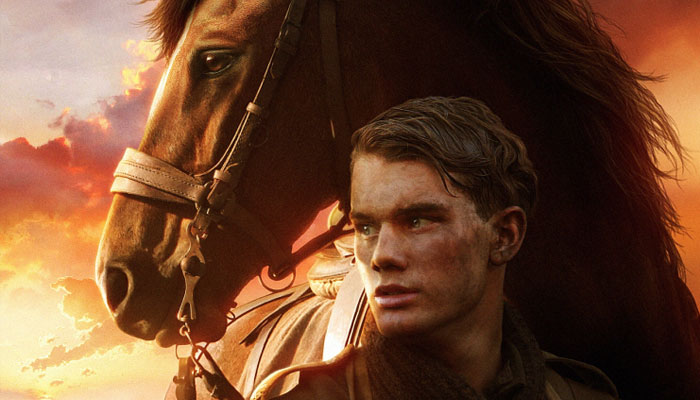 Director Steven Spielberg has done two features in one year on several occasions, but they were never released within days of each other.  That’s what happened with his 2011 feature WAR HORSE, which debuted on Christmas Day—a week after the bow of THE ADVENTURES OF TINTIN.  He was able to fit WAR HORSE into a relatively fallow period where he was waiting on the animation for TINTIN to finish (he shot the motion-capture motion elements all the way back in 2009).  That holiday season, the traditional film marketing avenues were saturated with WAR HORSE imagery.  I remember being wholly unimpressed with the campaign—to me, it looked like an overblown melodrama about some English dude who loves his horse a little too much.  It couldn’t have been more out of my general sphere of interest if it tried.  That impression held up, more or less, when I sat down to watch the film for this series.  On the whole, I found it to be a maudlin, frankly boring non-experience whose only strengths lied in the World War One battle sequences.  Don’t get me wrong, it’s an extraordinarily accomplished film on a technical level, and it deserves respect in that regard.  I personally just can’t get into it.  WAR HORSE did relatively well when it was released, its performance fueled primarily by the goodwill of Spielberg’s name.  He’s like the cinematic equivalent of pizza.  Even when it’s bad, it’s good.  A lot of critics genuinely liked it, and helped to propel it to a surefire Best Picture nomination at the Oscars—although it’s telling that Spielberg himself didn’t score a Directing nod.

We open on a sleepy village in 1919 England, where a young man named Albert Narracott (Jeremy Irvine) has befriended a particularly stubborn horse that his father bought to work the farm.  He trains it and bonds with it, only for his father to coldly sell it out from under him to the departing troops on the eve of World War 1.  We follow the exploits of this horse as it bounces from unfortunate owner to unfortunate owner and experiences quite the tidy little tour of the Western front.  It isn’t long until Albert—who has since joined up with the English army—reunites with his beloved horse just in time to save it from an honorable execution.  Think of it like a Great War-era E.T. THE EXTRA-TERRESTRIAL (1982), but with horses instead of aliens.

WAR HORSE marks Jeremy Irvine’s film debut as the boyishly eager and affectionate Albert Narracott.  He’s not bad in the role, but he doesn’t turn in a particularly memorable performance either.  Emily Watson plays his practical, frumpy mother Rose.  It’s not really a challenging performance for her—if anything, it’s beneath her considerable talents.

The film’s one bright spot in terms of casting is the presence of The Benedict Cumberbatch as Major Jamie Stewart, a very British stiff-upper-lip fella.  It’s a small role: the stubborn, aristocratic leader of a cavalry who’s proudly, fatally ignorant to the advance of combat technology.  And last but not least, Tom Hiddleston plays Captain Nichols, the sensitive cavalry-man who buys Albert’s horse.

In looking for visual inspiration, Spielberg and returning cinematographer Janusz Kaminski turned to John Ford’s seminal western THE SEARCHERS (1956), bringing its epic sense of panoramic vistas to the English countryside.  The result is an objectively beautiful film despite high contrast and a de-saturated palette of earth tones.  There’s very little pops of color, mainly because I’m pretty certain color doesn’t entirely exist in Britain.  They outlawed red after the Revolutionary War, right?

The film’s aesthetic aims for a juxtaposition between the smoky, muddy bleakness of war with the golden-tinged, romantic aura of the English countryside.  A copious amount of dolly and aerial movements gives off the vibe of an old school Hollywood epic.  WAR HORSE also marks Spielberg’s return to 35mm celluloid film after his first foray into digital filmmaking with THE ADVENTURES OF TINTIN.  Rick Carter once again serves as Production Designer, recreating an authentic sense of the period. His design goes a long way towards conveying a core conceit of the film, which is the idea that World War 1 was the first truly modern war.  We see the avatars of antiquity—horse-mounted cavalryman—charging forward into the devastating impersonality of machine gun fire.  Old meets new, and the results are catastrophic.

WAR HORSE marks the first time that Spielberg and frequent editor Michael Kahn used the nonlinear Avid system to assemble a live-action film.  They saw this project as a convenient opportunity to try out the technology, but after sensing that it rushed their creative process, the pair vowed to never use it again.  Such thinking is rare these days—Spielberg and Kahn’s generation is truly the last to edit films in the original way on a flatbed Moviola machine.

WAR HORSE’s obvious visual antecedent is SAVING PRIVATE RYAN (1998), especially in the war sequences where the shaky, handheld photography amplifies the gritty violence.  However, the gore is tamed down significantly to achieve the film’s PG-13 rating.  The trench scenes are highly reminiscent of Spielberg’s late friend and mentor Stanley Kubrick’s work on PATHS OF GLORY (1957), even going so far as to lift a few compositions directly from the black-and-white masterpiece.  WAR HORSE contains several of Spielberg’s other visual signatures (shafts of light, the awe/wonder shot, silhouettes, lens flares) as well as his musical ones in the form of John Williams’ sweeping, romantic (yet indistinct) score.

WAR HORSE was hard for me to watch, simply because I just couldn’t overcome my supreme indifference to it.  It has its moments, like a British and German soldier converging at the center of No Man’s Land to help free the titular horse after it’s stuck in barbed wire, but most of the film’s emotional basis lies in maudlin sentiments.  In trying to evoke the lavishly-mounted melodramas of the past, Spielberg goes too far in indulging his weaknesses as a filmmaker.  His aspirations for Oscar glory with this film are nakedly apparent.  I could see it in the trailer, and after seeing the final film I still feel the same way.  Not since Paul Haggis’ CRASH (2005) has a film appeared so blatantly Oscar-baity to me.  Spielberg gets knocked a lot for his tendency to over-sentimentalize, but with WAR HORSE he might actually deserve it.