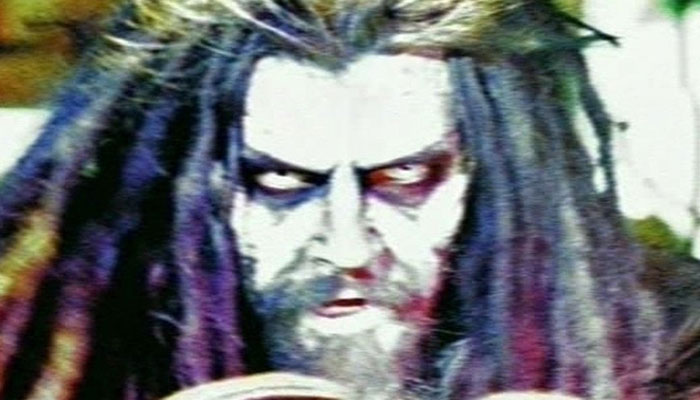 One of my pet peeves when it comes to art is when someone from a particular artistic discipline decides they want to try their hand at film directing.  In practice, it’s a hit or miss proposition:  for every successful transition (Steve McQueen, Tom Ford, or even Ben Affleck), there’s an abject failure (Madonna and…Madonna).  When shock rocker and frontman for the White Zombies, Rob Zombie, announced he wanted to be a film director, I’m sure many eyes rolled.  And understandably so—nothing he had done in his career up to that point had pointed to any inclination towards directing.  In hindsight, Zombie’s case proves the danger of boxing an artist in, as they are often just as talented in other forms of expression.

Zombie’s films are often negatively received, mostly due to preconceived notions about his celebrity or identity.  Despite this, he has cultivated a strong cult following over the course of five features and established himself as an undeniable auteur with an unmistakable stamp.  Whether that stamp appeals to you or not is simply a matter of taste.

Earlier in this project, I examined indie director Ti West’s career, and it’s my particular belief that West and Zombie are something of kindred spirits as far as their art is concerned.  Both have looked to an old-school 70’s/80’s aesthetic for inspiration and execution, and as a result, their resulting works stand out from the pack as fresh and original.  While they operate on different planes (West in the indie realm and Zombie handling the mainstream studio side), both directors have positioned themselves as the new vanguards of the genre, aided by an encyclopedic knowledge and respect for the masterworks that came before them.

I often find that the occupations or interests of an artist’s parents often influence his or her work.  For example, my father is an architect, and I find that profession as well as the general idea of structure and functional design to be recurring themes within my own work.  Mr. Zombie, born in 1965 under the distinctly un-hardcore name of Robert Bartleh Cummins, was also profoundly influenced by his parents’ profession and incorporated it as a recurring theme in his work.  His parents worked in a carnival in Haverhill, Massachusetts, so those viewing Zombie’s filmography in quick succession should not be surprised to see the heavy usage of circus imagery.  He attended college at Parsons School of Design, and soon afterwards pursued his first passion: music.  Taking the stage name of Rob Zombie, the young Robert Cummins assumed the frontman position in a shock rock band called White Zombie.  The genre gained significant popularity in the 80’s and 90’s, bringing similar acts like Marilyn Manson to the fore.  Zombie’s shows always had a penchant for over-the-top theatricality and Halloween iconography, which was appropriate given his stage name.  However, being a famous rock star only satisfied his artistic urges so much, and it wasn’t terribly long until Zombie felt the pull to the cinema screen.

For Zombie, directing music videos for his band must’ve seemed like the best way to break into the field and hone his filmmaking skills.  In 1995, he began his film career with a pair of videos for White Zombie.  The first, for their song “MORE HUMAN THAN HUMAN”, establishes a few tropes that would become commonplace amongst Zombie’s music video work.  The piece is anchored by a stylized performance element, edited together with mixed media (oftentimes heavily-scratched found-footage elements like home movies or newsreel footage).  He mixes the various source formats together and goes for broke with his color timing, adding lots of filtration and lurid colors.  You can say many things about this video, but one thing you definitely can’t say is that Zombie doesn’t have a clear idea of his own brand.  The piece is unified by an overall carnival-inspired aesthetic, with the heavy usage of costumes, masks, and Halloween paraphernalia.  In short, Zombie’s first video is short on substance but long on texture.

His second 1995 piece, “ELECTRIC HEAD PART 2 (THE ECSTASY)”, is also mostly performance-based, again incorporating a scratched-film/circus aesthetic.  He switches between color and black-and-white footage without any apparent rhyme or reason, so the idea of restraint hasn’t yet entered his mind.  What is most notable about this piece is that we can see the elements of the aesthetic that would inform his debut feature HOUSE OF 1000 CORPSES (2003) beginning to coagulate.

His third video for White Zombie, “I’M YOUR BOOGIEMAN” (1996), really brings his love for Halloween iconography and costumes front and center, while also incorporating coherent story elements.  He uses the framing device of one of those schlocky old horror TV programs for children you’d see in the 50’s or 60’s.  This “Dr. Spooky” element also foreshadows a similar conceit he’d use to open HOUSE OF 1000 CORPSES (which may or may not have inspired a similar technique that Ti West used in his own 2005 debut THE ROOST).  The requisite performance element of the video is a stark contrast from the Dr. Spooky framing device, bursting with lurid color and a gothic-rave style of production design.  With “I’M YOUR BOOGIEMAN”, Zombie is beginning to show more of a restrained focus and a unified vision.  He’s beginning to make curated directorial decisions instead of appearing to throw everything at the wall and see what sticks.

1996 also saw Zombie directing for a band that wasn’t his own.  For the largely-forgotten 90’s band Prong, Zombie delivers“RUDE AWAKENING”, a veritable acid trip of a video.  His visual approach combines bright, candy shades of color with a low-key, dark lighting scheme during the performance elements.  He further warps the frame with a post filter that resembles the effect of tripping on LSD (not that I’d know).  All of this is juxtaposed with black and white footage of people in costumes and masks for a grotesque, carnie effect.  The footage itself is expectedly scratched and grungy, with film artifacts that suggest some self-processing.   “RUDE AWAKENING” also takes a page from the darkly glamorous stylings of Betty Page, adding a touch of burlesque footage in the first instance of what would become another visual hallmark of his work.

In 1997, Zombie directed a video for the band Powerman 5000, who his brother happened to be the frontman for.  Putting aside the fact the song itself is terrible and entirely indicative of the scourge of the 90’s music scene that was nu-metal, Zombie’s “TOKYO VIGILANTE #1” adds another dimension to his body of work.  It’s once again a visual hodgepodge of scratched film effects, lurid colors and mixed media footage (kung-fu movie scenes this time).  Overall, it’s a forgettable video for a forgotten band.

Zombie’s 1998 video for The Ghastly Ones, “HAULIN’ HEARSE”, is one of my two favorites of Zombie’s videos.  The song is something like old-school surf rock, so he channels a look that evokes the visual sensibilities of midcentury surf films, albeit with a classic Universal monster movie twist.  The scratchy, grainy film is filmed handheld and entirely in black and white.  All the by-now classic Zombie tropes are there: dancing girls, chintzy costumes, and giant masks.  “HAULIN’ HEARSE” is the first instance of Zombie’s love for an old-fashioned aesthetic coming into play, giving us a peek into his familiarity with the cinematic language of the horror genre.

By the time 1998 rolled out, White Zombie has disbanded and Rob Zombie was well into his solo act.  As such the focus of his videos started shifting squarely towards him.  His video for “DRAGULA” depicts him in full-on monster costume, wildly driving a doom buggy with his friends.  The mixed-media approach returns, with Zombie pulling clips from old horror films and utilizing obsolete production techniques like back projection to create an old-fashioned charm.  For the first time, his found-footage selections appear to be trying to make some sort of commentary—he juxtaposes 50’s style home movies of families and clowns against atomic bomb explosions.  Dancing burlesque girls make their mandatory appearance, with one of them looking distinctly like Sheri Moon, Zombie’s future wife and frequent collaborator.  The style of costuming is also beginning to coagulate into the style seen in HOUSE OF 1000 CORPSES, most notably the giant head masks and a menacing robot costume with red goggles for eyes.

Zombie’s “LIVING DEAD GIRL” (1998) is my other favorite of Zombie’s videos.  Throughout most of his work, he assembles inspiration from a variety of sources, but here his influence is quite clear: Robert Weine’s silent hallmark of German Expressionism, THE CABINET OF DR. CALIGARI (1920).  Zombie’s approach essentially mimics CALIGARI, right down to the set design.  Resembling a scratchy old silent film, Zombie’s reproduction apes the monotone quality of such films—even incorporating the colored tints that filmmakers would apply to evoke mood in the days before color.  Zombie also refrains from moving the camera, opting for locked-off proscenium style shots that further emulate CALIGARI.  Sheri Moon, who was by this point Zombie’s cinematic muse and real-life girlfriend, plays the titular “Living Dead Girl”, while Zombie himself plays the Caligari role.  “LIVING DEAD GIRL” is standout in that it really shows off Zombie’s deep love and reverence for the genre that continues to inspire him.

Zombie’s “SUPERBEAST” (1999) finds the director really embracing an epileptic style of editing.  He’s in full-on camp mode, looking not unlike John Travolta in BATTLEFIELD EARTH (2000) and using heavy filtration and green-screen effects to create his fire and laser backgrounds.  The end result is like one of those hypnosis videos on steroids.  Sheri shows up here too.

In 2001’s “NEVER GONNA STOP (THE RED RED KROOVY)”, Zombie returns to the 1.85:1 aspect ratio and brings an inherently cinematic quality to his aesthetic.  This is understandable, as by this point he had already shot HOUSE OF 1000 CORPSES (although it wouldn’t be released for another two years).  A strong vision manifests itself here, taking a huge cue from Stanley Kubrick’s A CLOCKWORK ORANGE (1971) in both costumes and set design.  His wide, dynamic compositions are given an added grandiosity with huge crane movements that sweep across the elaborate set.  Zombie extends theCLOCKWORK ORANGE conceit to his burlesque dancers.  This is arguably his glossiest work to date, containing no scratched film elements or grungy filters.

2001’s “FEEL SO NUMB” finds Zombie using lens flares and bright, lurid colors against a low-key, gritty lighting style. There isn’t a lot to say about this piece other than all of Zombie’s visual signatures (burlesque, costumes, etc.) are present and accounted for.

Very few directors emerge as fully-formed auteurs right out of the gate, and Zombie is certainly no exception.  HOUSE OF 1000 CORPSES established his filmmaking style to audiences who otherwise wouldn’t be familiar with him, but the striking vision and confidence that marked his debut only came after several years toiling away in the music video realm, where he was free to experiment (wildly) and learn the ropes all at the same time.