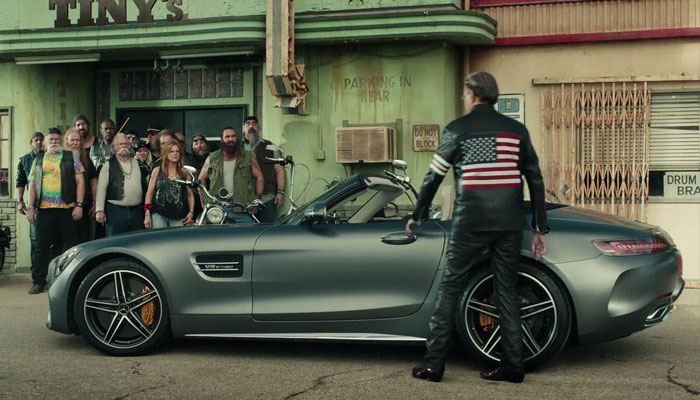 In 2017, directors Joel and Ethan Coen returned to the commercial fold for a high-profile Super Bowl spot.  Titled “EASY DRIVER”, the spot for Mercedes-Benz pays winking tribute to the lasting influence of Dennis Hopper’s pioneering independent film, EASY RIDER (1969), depicting a gang of goofball bikers blasting Steppenwolf’s “Born To Be Wild” in a bar tucked away out in the desert.  Someone rushes in and announces that their bikes are blocked in by a fancy Mercedes parked out front, so they rush out, ready to rumble.  Imagine their surprise when the owner of that Mercedes is none other than EASY RIDER’s Peter Fonda, who espouses the same cool nonchalance he had back then as he greets them and hits the open road once more.

The Coens embrace the screwball side of their aesthetic in executing the spot, framing the bikers in medium closeups at off-kilter angles to better highlight their exaggerated absurdity.  The desert setting evokes similar imagery from their back catalog, most immediately NO COUNTRY FOR OLD MEN (2007).  While the rest of their artistic signatures are fairly downplayed here, the Coens’ hiring is nonetheless apt, serving as a humble nod from a pair of independent cinema’s most prominent voices to the seminal work that paved the way for their own careers.