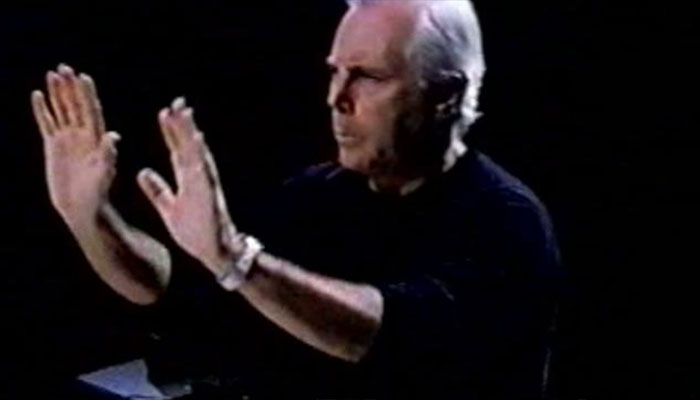 The same year that director Martin Scorsese released his crime epic GOODFELLAS to worldwide acclaim, he also released a short documentary work shot in Milan, Italy called (appropriately) MADE IN MILAN (1990).  The latest installment in a series of documentaries about people that captured Scorsese’s interest, the short showcases high-fashion icon Giorgio Armani as its subject.  As the film unspools, Armani talks about his influences and his passions, as well as his philosophy towards his craft.  Armani is shown to be a consummate artist, with a laser-like attention to detail and an intimate sense of connection with every single aspect of his work.  Unlike the profession in which he works, Armani comes off as very modest and unpretentious—a man who values refined simplicity over exhibitionism.

Shot by Scorsese’s NEW YORK STORIES: “LIFE LESSONS” (1989) cinematographer Nestor Almendros, MADE IN MILANis very artful and expressionistic in presentation.  Many of its visual techniques foreshadow the ubiquitous style of current fashion films—while they’re rooted firmly in the 90’s, Armani’s draping, baggy designs could pass for what you would see on the street in 2015.  Scorsese continues his employment of the Steadicam rig to give the film a nonstop, elegant sense of motion.  The camera glides through iconic Milanese landmarks like The Duomo, as well as quaint, tucked-away avenues, eventually transporting us to Armani’s offices.  The roaming exploration of the baroque architecture of Armani’s office combines with the designer’s reflective voiceover to create an evocative mood reminiscent of Alain Resnais’ LAST YEAR AT MARIENBAD (1961).

When the action shifts to the runway, Scorsese trades in the classical, Old-World look for a stark, modern feel that contrasts the pitch-blackness of the audience and the pure glowing white of the runway stage with the neutral tones of Armani’s clothing designs.   Working once again with regular editor Thelma Schoonmaker, Scorsese punctuates the naturalistic aesthetic of the documentary format with expressionistic touches like slow motion shots and subjects breaking the fourth wall.  Composer Howard Shore builds upon said expressionism with a score that infuses a traditional Italian folk sound with a sense of brooding intrigue, as well as the rhythmic pounding of tribal drums during the runway sequence.  The drums themselves seem to reference mankind’s ability to continually reinvent a technology (clothing) that’s been around for thousands of years.

MADE IN MILAN stays consistent with Scorsese’s career-long exploration of his Italian heritage, marking the first time in which he travels directly to his homeland to document his people’s traditions with fashion, family, and food—free from any American influence.  Technical signatures, like extended tracking shots and the exposure of the filmmaking craft within the piece itself mark the presence of Scorsese’s artistic vision, even going so far as to turn the camera around on the crew at one point and reveal Scorsese along with his producer Barbara De Fina and writer Jay Cocks.  As a short documentary, MADE IN MILAN doesn’t particularly lend itself towards personal artistic growth for Scorsese, but it rather quietly announces a major milestone in his career—his ascension as an equal to cultural tastemakers on the world stage.

MADE IN MILAN is currently available as a VHS-sourced transfer on Youtube via the embed above.