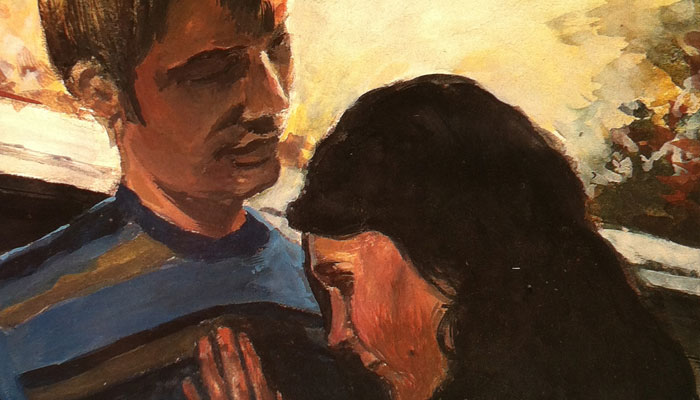 Director Kelly Reichardt released her debut feature, RIVER OF GRASS, in 1994, but her sophomore effort, OLD JOY, wouldn’t arrive until 2006.  At the risk of stating the obvious, that’s a gap of twelve years — an unnaturally long period by any standard of measure.  While such developments are rare among most commercially-successful filmmakers, they are frustratingly common amongst a certain subset of directors regardless of success: women.  A recent example can be found in Debra Granik, who won top honors at Sundance with WINTER’S BONE in 2010, but is only just now releasing her follow-up (LEAVE NO TRACE).  One could also look to Patty Jenkins, who has only recently re-emerged to prominence with 2017’s WONDER WOMAN after debuting in 2003 with MONSTER.  Five years into this undoubtedly frustrating period, Reichardt decided to take matters into her own hands.

The plan to combat her career stall would begin with the making of three short films.  The first of these, 1999’s ODE, would be more ambitious than the rest in its scope, clocking in at a runtime of 50 minutes.  By most industry metrics, a 50-minute runtime technically constitutes the dividing line between the short and feature formats— as such, there are conflicting reports as to whether OLD JOY or ODE stands as Reichardt’s true second feature.  It all depends on one’s personal standing. We count it as such, if only because its artistic ambitions reaches so clearly above her other shorter works from this period.  Produced under her RIVER OF GRASS collaborator Larry Fessenden’s Glass Eye Pix banner, in partnership with Susan A. Stover (who also recorded sound on-set), ODE finds Reichardt adapting Herman Raucher’s 1976 novel “Ode To Billie Joe”.  Reichardt’s screenplay updates the setting from 1976 to present-day, which only highlights the insularity and conservative regressiveness of the story’s wooded Mississippi town. Bobbie Lee (Heather Gottlieb) is an innocent, devout Baptist girl whose burgeoning womanhood is causing her to chafe against the strict expectations of her community.  The simmering interior tension comes to a head when she meets Billy Joe (Kevin Poole), a brooding young townie who wears a mask of casual nonconformity to hide his confusion about his own sexuality. The two begin meeting underneath a local bridge, slowly building a relationship beyond the watchful eyes of the town. Their fumbling attempt to consummate their love comes comes crashing down when Billy Joe reveals that he’s unable to perform, having become wracked with guilt over a recent romantic encounter with another boy.  What results is a tragic meditation on the pressures of conforming to one’s environment, and the roiling anguish that can ensue when a sense of self-identity is thrown into sudden flux.

Befitting its shoestring budget status, Reichardt executes ODE with a crew of two— co-producer Stover running sound, as mentioned before, and herself working as the cinematographer.  It’s notable that ODE is shot on Super 8mm film, especially when considering that Reichardt could quite easily have shot with prosumer digital cameras.  By 1999, such cameras were widely available, even if the ability to capture crisp footage at 24 frames a second was not. The choice to shoot on Super 8, then, implies itself as one made purely for aesthetics.  Indeed, Reichardt has yet to shoot a project with digital cameras, pointing to a personal preference for celluloid that sets her apart from her peers in the independent realm. More than anything, ODE asserts itself as a transitional work in Reichardt’s artistic development, bearing traces of RIVER OF GRASS’ slight stylization while laying the groundwork for the rugged, lived-in realism that would mark all of her subsequent features.  Her unadorned, observational camerawork uses natural light to imprint a sunny, autumnal aura onto the frame, its colors already smeared into slight abstraction by virtue of the smaller, amateur/enthusiast film gauge.  Camera movement is limited to maneuvers that a crew of one can feasibly pull off— handheld setups, rack zooms, and the usage of a car as an impromptu dolly. Editor Philip Harrison helps Reichardt retain some of the BADLANDS influence that was so deeply felt throughout RIVER OF GRASS, notably through the spotty, inconsistent deployment of ruminative voiceovers from both Bobbie Lee as well as an omniscient third-person narrator, in addition to frequent close-up cutaways to surrounding wildlife.  Folk musician Will Oldham arguably stands as ODE’s most notable collaborator, providing an original score comprised of a wistful, lilting guitar tune that reinforces the film’s Appalachian backdrop while establishing the foundation for a creative partnership that would later translate to a starring role for Oldham in Reichardt’s next feature, OLD JOY.

Despite its obscurity and estrangement within Reichardt’s official canon, ODE nevertheless complements her core artistic and thematic priorities.  Its low-key meditation on the challenge of reconciling the spectrum of romantic orientation within a hardline community dovetails neatly with Reichardt’s ongoing examination of people who live on the rural fringes of society, trapped within a cultural narrative they’ve no longer come to fit.  It doesn’t necessarily add to Reichardt’s filmography as a whole, but it still holds interest for those looking for a more-complete picture of her creative worldview. Perhaps more crucially, ODE’s true import arguably lies in its kickstarting of Reichardt’s momentum after a sustained fallow period — a development that undoubtedly compelled the burgeoning director to double down on her independent inclinations, thus setting a firm trajectory for the subsequent course of her career.  Those wishing to see the curio that is ODE either have to wait for the rare repertory theater screening, or contend with the embedded rip from a VHS tape above (with German subtitles, interestingly enough).  With any luck, a faithful restoration of the original Super 8mm film elements could help the film community recognize ODE’s transformational place in Reichardt’s broader career.

ODE is currently available via the YouTube embed above, starting with Part 2 (Part 1 is seemingly no longer unavailable for copyright reasons).

Produced by: Susan A. Stover

Music by: Will Oldham