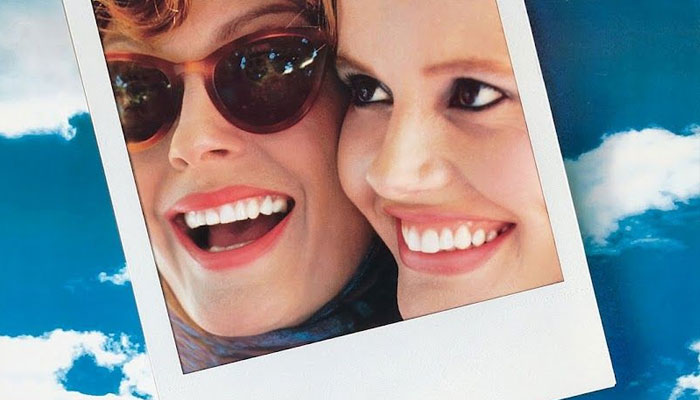 Inducted into the National Film Registry in 2016

Notable Festivals: Cannes (Out of Competition)

A good friend once likened a director’s cultural relevance to a tuning fork— after so many strikes, the fork can begin straying from perfect pitch.  Similarly, a director can deliver a number of films that strike a chord with audiences before finding him or herself eclipsed by their changing tastes.  Once that pitch begins wavering, it can be extremely difficult to recalibrate— indeed, many filmmakers can never attain the same lofty heights after they’ve fallen out of fashion.  Director Francis Ford Coppola is an excellent example: after creating some of the most iconic films ever made during a legendary run in the 1970’s, his subsequent efforts throughout the 80s and 90’s failed to measure up.  Even direct efforts to recapture that magic, like 1990’s THE GODFATHER PART III, proved unsuccessful.  Sir Ridley Scott’s lurching career is an excellent example of another side of this phenomenon— his versatility and artistic sensitivity has allowed him to weather multiple professional depressions, emerging on the other side as an even stronger filmmaker than he was before.  Case in point: 1991’s THELMA & LOUISE, a celebrated classic that saw Scott’s return to cultural prominence after a series of thrillers made in the mid-to-late 80’s that yielded diminishing returns.  The film is a master class in recalibrating one’s artistic sensibilities by venturing far outside established zones of comfort while still retaining the aspects that make one’s artistry unique.

First written in 1980 by first-time screenwriter Callie Khouri as an intended directing vehicle (1), the cutting-edge screenplay for THELMA & LOUISE steadily gained the attraction of powerful benefactors throughout its ten year slog to cinema screens.  The project didn’t gain its critical momentum until producer Mimi Polk Gitlin brought the project to Scott for his producing consideration.  As a filmmaker with a well-established track record for vividly-realized female protagonists, Scott found the project an easy proposition. After shepherding the project through the development and pre-production pipeline, his collaborators began to insist that he should also direct.  While we might argue today that a female director is the appropriate choice to tackle such an unabashedly feminist story, Scott’s artistic caliber undoubtedly injected their efforts with a higher commercial profile while insulating against the inevitable critiques that the story was hateful towards men.  A female-directed THELMA & LOUISE would no doubt have made for a groundbreaking and distinctive experience, but Scott’s take on the matter nonetheless makes for a highly-stylized classic of blockbuster proportions. 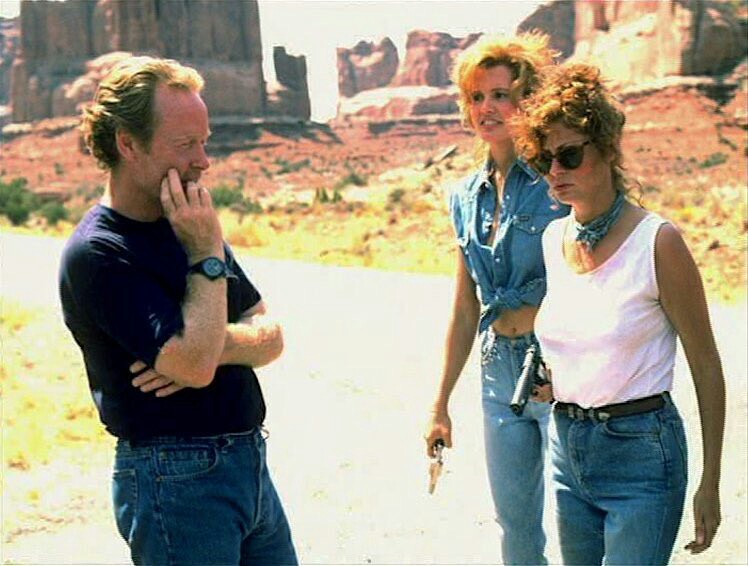 THELMA & LOUISE finds Scott turning his lens to new vistas heretofore unseen in his filmography: the high deserts of America’s heartland and its sprawling highway system.  Beginning in Arkansas, the story quickly introduces us to Susan Sarandon’s Louise, a salty diner waitress, and Geena Davis’ Thelma, a naive housewife living in stifled domesticity with her overcompensating redneck salesman husband, Darryl (played with campy swagger by Christopher McDonald).  The girls hit the road for a short weekend getaway, but their intended fishing trip quickly balloons into something else altogether when Louise shoots a man dead to prevent him from raping Thelma in a roadhouse parking lot. Quickly determining that they’re not cut out for the prison life, the girls hastily decide to extend their little road trip and make a run for Mexico.  Making their way through the American Southwest towards an unexpected terminus at the Grand Canyon, their body count escalates as they encounter ever-more cocksure men deserving of their wrath. Thelma & Louise’s journey is one of liberation, empowerment, and self-realization, layered with nuanced character shading and idiosyncrasies that would earn Oscar nominations in the Best Actress category for both Sarandon and Davis.  The film’s predominantly-male supporting cast happily plays into the narrative’s absurdist skewering of masculinity. Alongside McDonald’s aforementioned performance, the film boasts inspired turns by venerated characters actors like Harvey Keitel, Michael Madsen, and Stephen Tobolowsky— Keitel reuniting with Scott after their collaboration on his 1977 debut THE DUELLISTS and playing a driven, compassionate detective named Hal who wants to serve justice while ensuring the girls’ personal safety, Tobolowsky as Hal’s milquetoast superior, and Madsen as Louise’s cool but volatile rockabilly boyfriend, Jimmy.  Of course, no discussion of THELMA & LOUISE’s cast is complete without mentioning Brad Pitt, who delivers his breakthrough performance here as JD, a boyishly-charming drifter who helps Thelma achieve her sexual reawakening even as his slippery, sociopathic tendencies come into focus.

THELMA & LOUISE marks Scott’s third successive project set in a world that’s not of his own making.  Nevertheless, he remakes our contemporaneous reality in his own image, infusing his real-world backdrops with an immersive cinematic scale.  In his first collaboration with Scott, the late cinematographer Adrian Biddle updates and complements Scott’s established aesthetic for a new era, earning an Oscar nomination for his efforts  Framed in the 2.35:1 aspect ratio and captured on 35mm film, THELMA & LOUISE presents a high-contrast visual style that employs atmospheric lighting effects emblematic of Scott’s hand: silhouettes, backlit interiors rendered with a cold, cerulean daylight, smoke, lens flares, and surging neon.  Harsh orange sunlight radiates over dramatic desert vistas populated by Scott’s signature attention to detail and returning production designer Norris Spencer’s set dressings, with busy diners, honkytonk trucker bars, roadside gas stations, sprawling oil fields, and crop-duster flybys creating a vivid picture of the American southwest as seen from the perspective of an English immigrant.  Editor Thom Noble would also score an Oscar nomination of his own, sewing together scenes shot in LA, Barstow, and as far away as Monument Valley and Moab, Utah into a singular, cohesive environment. Scott’s second consecutive collaboration with composer Hans Zimmer results in a classic score that’s reminiscent of Ry Cooder’s distinct sound— a sonic palette of brooding electric guitar wails and folksy harmonica riffs, complementing a well-chosen mix of needledrops that pull from the deep cuts of roadhouse country and redneck rock.

Thelma and Louise join the ranks of previous Scott heroines like Ripley, Rachael, and Lili in the director’s pantheon of vibrantly-realized female protagonists, but their aggressive brand of armed feminism wasn’t appreciated by all.  The film was besieged by controversy upon its release, with many people (mostly men) feeling as if they were personally under attack. Others decried what they saw as THELMA & LOUISE’s masculinization of its two heroines, taking issue with the film’s use of violence and sexual liberation as tools of empowerment.  Nonetheless, THELMA & LOUISE managed to strike a chord with audiences, with its cultural resonance ultimately landing Davis and Sarandon on the cover of Time.  Critics praised the film, lauding Scott in particular for his bold direction and his revealing of a comedic dexterity heretofore unknown to audiences.  Six Oscar nominations followed, including those in the aforementioned categories of cinematography & editing in addition to an original screenplay nod for Khouri and Scott’s own nomination for directing — his first.  Time has only bolstered THELMA & LOUISE as a cornerstone of not just Scott’s cinematic legacy, but feminist and 90’s cinema as well, earning a spot on the Library of Congress’ National Film Registry in 2016.  After a series of admittedly-middling works in the late 80’s, the production of THELMA & LOUISE would usher in an entirely new phase of Scott’s career— one that would actively shape the cultural character of the 1990’s and beyond.