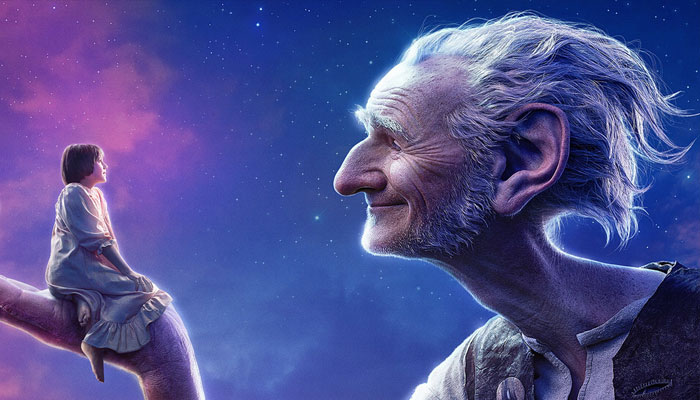 Notable Festivals: Cannes (Out Of Competition)

Roald Dahl’s iconic novel “The BFG” holds a special place in almost every child’s heart as a hallmark in his or her early literary development, much as director Steven Spielberg’s 1982 film E.T: THE EXTRA-TERRESTRIAL does for a child’s burgeoning appreciation for cinema.  It was perhaps inevitable, then, that these two giants of pop culture would come together at some point.  The convergence happened in 2016, with Spielberg delivering his adaptation of Dahl’s novel to cinemas after gestating for nearly 30 years in development hell.  THE BFG’s production history extends back all the way to the 1990’s, when Spielberg’s frequent producing partners Kathleen Kennedy and Frank Marshall obtained the film rights and tried to crack a version that would have featured the late Robin Williams in the title role (1).  Following a reportedly disastrous table read of this early draft, the project fell into turnaround until the rights reverted back to the Dahl estate, only to be subsequently picked up by Spielberg’s company, Dreamworks, in 2011 (1).  Melissa Mathison, who had previously collaborated with Spielberg on E.T: THE EXTRA-TERRESTRIAL, delivered a screenplay that convinced Spielberg to direct in addition to producing alongside Marshall and Sam Mercer.  The reunion of Spielberg and Mathison (and the ensuing creative energy that previously drove E.T. to dizzying heights of success) proved to be the key development that finally got the project before cameras in the spring of 2015.  THE BFG marks Spielberg’s thirtieth theatrical feature (and his first for Walt Disney Pictures), benefitting from his extensive experience in capturing the magic of childhood despite its chilly reception from an audience that had little use for it. 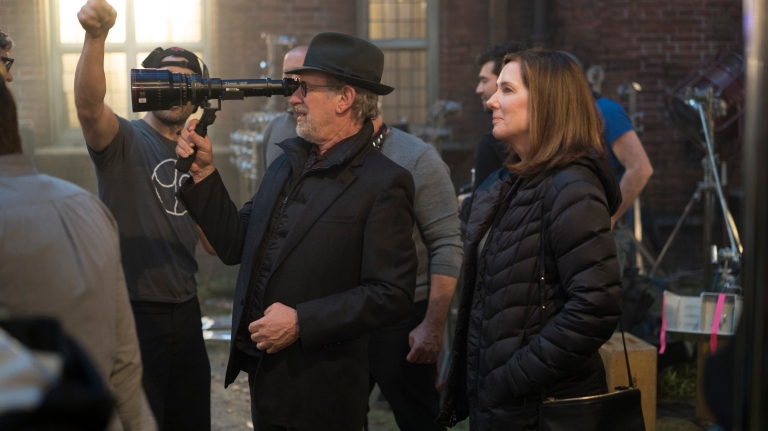 Spielberg’s film faithfully adapts the major beats of Dahl’s novel, which details the friendship between a young orphan girl named Sophie and the titular friendly giant.  The adventure begins in London, when the precocious Sophie (newcomer Ruby Barnhill) glimpses the sight of a giant roaming the streets for supplies in the middle of the night.  Having been sighted, the giant has no choice but to snatch the young girl from the window of her orphanage and steal her away to Giant Country, a wondrous fantasy land inhabited by giant folk.  Mark Rylance, cast by Spielberg during the production of BRIDGE OF SPIES (2015), delivers a whimsical (and slightly grumpy) motion-capture performance as the Big Friendly Giant.  Funnily enough, he’s the runt of his bigger giant brethren– thinner, shorter, and endlessly bullied by the likes of alpha-giants like Fleshlumpeater and Bloodbottler (imbued with the vocal talents of Jermaine Clement and Bill Hader, respectively).  As Sophie develops a relationship with her benevolent captor, BFG shows her his extensive dream collection, visually manifested as brilliantly-colored lights trapped in glass jars.  These jars allow him to manipulate the dreams of others– an ability that comes in handy when they hatch a plan to rid Giant Country of its abrasive bullies by planting the idea in the dreams of none other than the Queen (Penelope Wilton).  A thinly-veiled fictionalization of Queen Elizabeth II (complete with a detail of corgis at her heels), the Queen wakes from her dream ready to accept the existence of the BGF when he and Sophie make themselves known to her and her daughter Mary (played by Rebecca Hall in the vein of Kate Middleton).  Together, they launch a coordinated offensive to rid Giant Country of Fleshlumpeater and his ilk once and for all.

THE BFG distinguishes itself amongst Spielberg’s deep filmography as the director’s first feature to be shot digitally– a move made necessary by the sheer amount of CGI required to realize the whimsical sheen he brings to his 2.35:1 image.  Indeed, the film plays like a living storybook, not unlike the visual style of his animated co-venture with director Peter Jackson, THE ADVENTURES OF TINTIN (2011).  THE BFG was always going to be a challenging prospect from a visual effects perspective, and in this regard, its long gestating period actually works out in its favor.  The astronomic advances made in digital technology since the film’s development began in the 1990’s empowers THE BFG to fully realize itself.  Just look at the insanely-detailed and lifelike skin textures on the all-CG giant characters– not even five years ago, that skin would have appeared noticeably more waxy and smooth.  The enormous logistical challenge of shooting a film where the characters have such a dramatic size discrepancy meant that Spielberg and his longtime cinematographer Janusz Kaminski would have to turn to unconventional methods.  Towards this end, they utilized the Simulcam process developed by director James Cameron during the making of 2009’s AVATAR— a technology that allowed actors to interact with digital sets and CG characters via advanced motion-capture techniques in real time.  Even under all this CG scaffolding, THE BFG still manages to visually assert itself as an identifiably Spielbergian work, digitally recreating the lens flares and blooming lights sources that have become such a staple of the director’s late-career aesthetic.  His intuitive ability to compose a frame that sears itself into our unconscious memories finds endless opportunity in THE BFG’s narrative, and he exploits this opportunity at almost every turn by shooting most of the film in the wide so as to better communicate its scale and the aforementioned size discrepancy between its two leads.  Simply put, an all-digital environment allows Spielberg’s imagination to run free, allowing him to execute complicated camera movements that would be extraordinarily difficult — impossible, even — to achieve in reality.

THE BFG marks Spielberg’s reunion with several other longtime collaborators who, for one reason or another, sat out BRIDGE OF SPIES.  Longtime production designer Rick Carter teams up with co-designer Robert Stromberg to create an enchanting digital environment for Barnhill and Spielberg’s CG creations to inhabit.  Carter and Stromberg cultivate a blue/orange palette that, by virtue of its chromatic restraint, makes the saturated rainbow colors of the BFG’s dream jars all the more brilliant and magical.  The city of London is realized as a fictional recreation outside of time, full of various anachronisms that place the audience in a vaguely modern timeframe without being able to pinpoint an exact year.  A handmade sensibility reminiscent of Spielberg’s HOOK (1991) directs the design of Giant Country, a fantastical wonderland where giants use beaten-down cars as roller skates.  After missing out on BRIDGE OF SPIES due to health concerns, composer John Williams returns to Spielberg’s fold with a subdued orchestral score that complements the wonder and intrigue of the film’s visuals without ever claiming the spotlight for its own.

Roald Dahl’s literary universe proves an apt playground for Spielberg to explore his particular set of longtime thematic fascinations.  Spielberg’s films about childhood adventure — films like E.T: THE EXTRA-TERRESTRIAL, EMPIRE OF THE SUN (1987), HOOK, and to a certain extent, A.I: ARTIFICIAL INTELLIGENCE (2001) — often adopt a pint-sized perspective that regards the world around them with wonder and awe.  With its pre-pubescent protagonist, THE BFG naturally defaults to this particular perspective, complete with framing that literally looks up to see the actions of giants working overhead.  Sophie’s background as an orphan finds added poignancy by virtue of Spielberg’s experience with depicting strained family dynamics onscreen; her lack of a family emphasized by her isolation even within a large orphanage, she finds in The BFG not only a companion, but the father figure she’s been longing for.  Spielberg even indulges his love for aviation in the film’s soaring climax, which finds a fleet of military helicopters sent to Giant Country to trap the evil giants and drop them onto an isolated island in the middle of the ocean.  Spielberg’s reverence towards Dahl’s classic novel is palpable, never letting his own directorial signatures get in the way of a faithful adaptation.

The release of THE BFG in 2016 was a bittersweet affair– the film’s positive reviews and modest box office take were tempered by the sadness of writer Melissa Mathison’s cancer diagnosis and untimely passing during production.  Mathison had been a tremendously influential voice in the early stages of Spielberg’s cinematic development, helping him find his signature style with E.T: THE EXTRA-TERRESTRIAL’s story about a young boy’s friendship with a benevolent alien.  It’s apt, then, that their last collaboration together would cover similar territory.  After premiering out of competition at the Cannes Film Festival, THE BFG found a generally warm reception from critics.  The audience reception was a different story, with the film managing to garner only a tepid interest despite the widespread familiarity of Dahl’s book or the mainstream pedigree of Spielberg’s name.  Analysts decried its lackluster performance at the box office on opening weekend, and its eventual profit of $40 million in worldwide receipts over a $140 million budget would cement THE BFG as one of the lowest grossing films of Spielberg’s long and celebrated career.  All things considered, this wasn’t the worst of all possible fates for a project that spent decades in development hell.  Indeed, Spielberg has already moved on to a new slate of projects that will surely push him past this minor stumbling block– this holiday season will see the release of THE POST, the latest entry in his well-regarded social justice pictures as well as a fifth collaboration with Tom Hanks; next year will find him returning to his 80’s pop spectacle heyday with READY PLAYER ONE; a fifth INDIANA JONES film (God help us) is even on the imminent horizon for 2020.  With so much creative momentum propelling him forward, it’s natural to see THE BFG’s lackluster outcome as a mere glancing blow, registering only the slightest of disturbances as Spielberg continues along his course.

THE BFG is currently available on high definition Blu Ray via Disney.