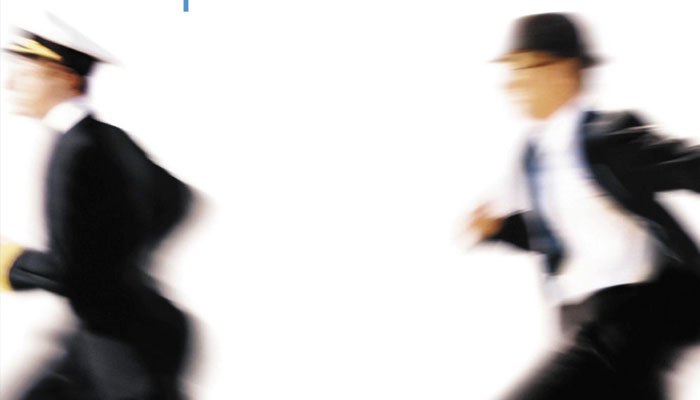 As a young man coming off age in the early 1960’s, Frank Abagnale Jr found himself caught in the middle of his parents during their divorce—a scenario that has become unfortunately ordinary to scores of kids like him.  But Frank wasn’t like most kids, and his response to the scenario was anything but ordinary.  He ran away home, staying afloat by forging checks and conjuring up fake identities for himself to escape detection.  Frank was a cunning kid, and a master of disguise, which enabled him to con his way across America for the better part of a decade, fooling people into believing that he was everything from a Pan Am pilot to a doctor to a lawyer.  He was caught, of course, but only after accumulating millions of dollars’ worth of damage.  But instead of languishing in a jail cell until old age, he served only a few years before a paroled release turned him over to the custody of the FBI so he could help them bust other fraudsters just like him.  Frank eventually became the leading check fraud expert in the country, and has designed much of the anti-counterfeit measures found on checks today.

Frank’s sensational life story was soon turned into an autobiographical novel called “Catch Me If You Can”, and unsurprisingly, attracted attention from several major studios.  After a revolving door of directors like David Fincher and Gore Verbinski attached themselves to the project, director Steven Spielberg finally took the helm in the same year he shot his gritty sci-fi noir, MINORITY REPORT (2002).  Of all the directors in the mix, Spielberg had the most personal connection to the source material—in his youth, he disguised himself to trick people into thinking he was somebody that he wasn’t.  He wore a suit every day of one college summer and pretended to be a studio executive, which repeatedly allowed him to waltz right into the Universal lot.  Now, forty years later, Spielberg was the studios, and after the dark dramatics of MINORITY REPORT, he desired to make a self-described “cupcake of a film”.  He saw in CATCH ME IF YOU CAN a light-hearted, jet-setting romp through the 1960’s.  But what was meant to be a diversion—a mere mood-lifter—was a smash hit when it debuted, and still stands today as one of Spielberg’s most thoroughly-entertaining films. 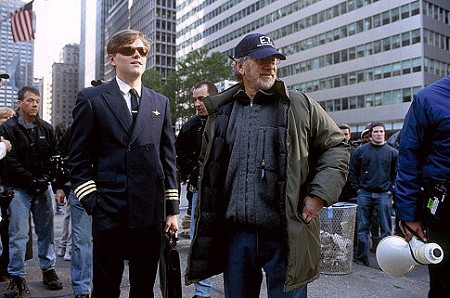 CATCH ME IF YOU CAN closely follows Abagnale’s life from his first con all the way through to his success as a parolee FBI consultant.  Much like Frank’s life, the truth has been smudged here and there, but it’s hard to complain when the final product is such a breezy, stylish ride.  Spielberg had always wanted to work with Leonardo DiCaprio, and he finally got his wish with a role that was tailor-made for the young star’s talents.  As Frank Abagnale Jr. DiCaprio is charming, resourceful and ambitious.  He’s driven by a desire to reunite his parents– a desire borne from the assumption that money broke his family apart so money will therefore bring them back together.  Despite the flashiness of the film’s surface, however, DiCaprio finds the pathos in Frank Jr and brings it out in a sympathetic, convincing way.

Tom Hanks, in his second starring effort for Spielberg, plays Carl Hanratty as a very unique, interesting antagonist.  Hanratty is an FBI agent obsessed with tracking down Abagnale and bringing him to justice.  In general, he’s got a kindly, determined temperament—and like most establishment officials of the time, he’s a straightlaced, uptight square.  As he tracks Abagnale, they form a strange symbiotic relationship, and before he know sit, he’s become something of a surrogate father figure to the young con artist.  Hanks’ performance benefits from his familiarity with Spielberg’s directing style, easily finding the requisite paternal warmth required from his very unconventional antagonist.  Christopher Walken was nominated for a Best Supporting Actor Oscar for his performance as Frank Abagnale Sr, a well-respected community figure and WW2 vet burdened with a secret, debilitating financial debt that forces him to lie in order to save face.  As DiCaprio’s dad, Walken is inspired casting.  He’s a con-man charmer with an affinity for women—it’s easy to see why he would be a hero to a young lad such as Frank Jr.

Venerable character actor Martin Sheen plays Roger Strong, yet another father figure in Frank’s life as well as Brenda Strong’s real father.  His role as a wealthy New Orleans attorney is brief, yet memorable, and Sheen counts it as one of his most rewarding experiences on a set.  He was so intent on working with Spielberg that he secured a leave from THE WEST WING (where he played a little role called The President) when the call finally came.  James Brolin plays Jack Barnes, the President of the Rotary Club who’s having an affair with Frank’s mother, eventually becoming her new husband after the divorce.  It’s a small role, but Brolin is adept at projecting the seediness underneath his regal, gentlemanly exterior.

The film makes it very clear that Frank Junior, much like his dear old dad, had quite a way with the ladies.  As such, CATCH ME IF YOU CAN boasts a rogue’s gallery of then-burgeoning starlets (most of whom now enjoy significant celebrity status).  Ady Adams plays Brenda Strong, the most emotionally significant woman in Abagnale’s young life.  She’s initially introduced as a dorky hospital nurse with braces, but she slowly reveals a layered, complex character with a troubled history.  Her emotional vulnerability encourages Abagnale to let his guard down, which sets his downfall into motion when he confides his real name and gives up his invented identity to her.  Elizabeth Banks plays Lucy, a bashful southern belle and bank teller who is easily conned by Frank’s charm.  Jennifer Garner plays Cheryl Ann, a sultry, cynical model who smell the money on Frank, and thus, opportunity.  Her scene results in one of the film’s best laughs, when she demands a large sum of money for a night of her company, only to unknowingly accept a fake cashier’s check from him and pay back the overage difference in cash.

After a string of moody-looking pictures, Spielberg and returning cinematographer Janusz Kaminksi go for a distinctly brighter, cheerier, and decidedly mod aesthetic to reflect the jet-setting 1960’s time period.  The black are still crushed and the highlights still bloom, but the color palette is much richer and warmer (save for a heavy blue tint in cold prison sequences).  Spielberg brings back a stylized sense of camera movement, using lots of dolly and crane shots to echo the old-Hollywood glamor they’re aiming to emulate.  Also mixed in are several handheld moments that add complexity and grit to an otherwise confectionary visual style.  Jeanine Claudia Oppenwall’s production design authentically recreates the 60’s without ever feeling like a costume pageant.  Every frame is soaked in the retro aesthetic, all the way down to the truly-great, Saul-Bass inspired opening credits that utilize inventive graphic art.  Returning editor Michael Kahn keeps pace with the breeziness, creating an edit that heartily careens through Abagnale’s decade-long con in a swift way that belies its two and-a-half hour running time.

Spielberg’s maestro John Williams creates a score that departs heavily from their typical collaborations.  To reflect the times in which CATCH ME IF YOU CAN takes place, Williams opts for a distinctly jazzy sound, incorporating beatnik-style finger snaps as a percussive motif.  Spielberg also relies heavily on source cues to further convey the period.  He uses a mix of popular torch and pop songs from the era that serve as inspired and unexpected musical texture.  In a little bit of levity, Spielberg also includes the iconic James Bond theme during a gag wherein Abagnale tears around town in Bond’s Aston Martin after seeing GOLDFINGER (1964).  Remember that Spielberg had always wanted to direct a James Bond film himself—a desire that led to his involvement with RAIDERS OF THE LOST ARK (1981).

After the grim and gritty MINORITY REPORT, Spielberg understandably was looking to take on something more light-hearted as his next project.  As a result, CATCH ME IF YOU CAN is one of Spielberg’s most cheery, earnest, and upbeat beats (at least on the surface—the emotions fueling the story are dark and complex).  CATCH ME IF YOU CAN, as well as Spielberg’s ensuing film THE TERMINAL (2004), marks the beginning of a somewhat micro-phase in Spielberg’s career, in which he draws heavily from the style of one of his key influences: Frank Capra.

Despite channeling Capra’ ghost with its upbeat, old-fashioned, everyman/Americana goodness, CATCH ME IF YOU CAN still bears Spielberg’s unmistakable stamp.  His fascination with aviation takes center stage, devoting large chunks of screen time to Abagnale’s adventures posing as a Pan Am pilot.  He ably captures the high-fashion glamor of air travel that defined the jet-set era, an era I frequently find myself wishing for when I’m sharing a cramped coach cabin with a legion of tacky people in velour track suits.  Another key part of the narrative is the relationship between father and son, being the product of a broken home.  Every action that Abagnale takes is in a bid to reunite his parents.  He tries hard to attain his father’s approval, but his success is all built on the same sort of lies that splintered his family apart in the first place.

Despite the 1960’s setting, World War 2’s specter emerges once again, in the subtle form of Walken’s Abagnale Sr being a war vet who plays the sympathy card with it frequently.  Other hallmarks of Spielberg’s visual conceits make their requisite appearance: low angle compositions, shafts of light, lens flares, jump cuts, silhouettes, and even a brief instance of a character breaking the fourth wall.

CATCH ME IF YOU CAN was well-received upon its release, both financially and critically.  It became an instant crowd favorite, even giving Spielberg’s other 2002 hit MINORITY REPORT a run for its money as one of the best films of the year.  DiCaprio and Hanks’ performances were universally praised, but it was Walken who was really singled out come awards time.  Ten years later, CATCH ME IF YOU CAN is still considered one of Spielberg’s best works, and easily one of his most enjoyable to watch.  His ability to abruptly pivot from cold, gritty drama to warm, upbeat comedy shows how effortless of a storyteller one can be with thirty years’ experience churning out consistently and reliably entertaining works.  To put it simply, when it comes to studio filmmaking, Spielberg is king.  The rest are just imposters.