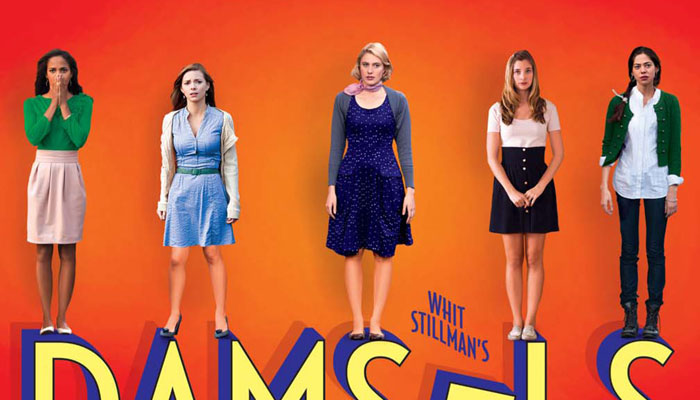 Following the release of 1998’s THE LAST DAYS OF DISCO, director Whit Stillman promptly sold his Manhattan digs and relocated to Paris.  The reasoning is unclear, but given his romanticism of European countries and a lengthy stay in Barcelona during his youth, I can’t say it’s entirely unexpected.  What’s more unexpected is that he would drop out of the film scene entirely for the next decade.

Stillman would return to the US in 2009, and after a 13 year hiatus from filmmaking, he released his most recent feature, DAMSELS IN DISTRESS (2011).  Whereas his previous films had gotten increasingly larger in scope, Stillman scales back the story and infuses it with an eclectic mix of faces, both famous and non.  While Stillman’s works are considered “comedies of manners”, they often have a serious, dramatic underpinning to them alluding to the loss of a certain way of life.  DAMSELS IN DISTRESS takes a different tack, as Stillman goes for a firmly comedic tone, at turns both obscure and broad.  The result is a wildly uneven film that’s firm in its eccentric convictions, but lacks the warmth and accessability of his previous work.

DAMSELS IN DISTRESS follows a clique of young women at an elite (fictional) East Coast university, motivated by their de facto leader, Violet (Greta Gerwig).  This group of haughty, socially-awkward girls originally starts out with just two others: Heather (Carrie MacLemore) and Rose (Megalyn Echikunwoke), but through their outreach efforts at the school’s Suicide Prevention Center, they find themselves collecting an eclectic array of people into their circle.  When Violet invites a young transfer student named Lily (Analeigh Tipton) into the fold, she finds herself contending with her rebellious new charge for the affections of a self-admitted player (Adam Brody).

While the story is erratic, uneven, and oftentimes meandering, Stillman commands consistent and dedicated performances from his cast.  Hot off her big feature film debut in Noah Baumbach’s GREENBERG (2010), it’s fitting that Greta Gerwig was then cast in a film by one of Baubmach’s biggest cinematic influences.  Under Stillman’s guidance, Gerwig blossoms into an enigmatic and alluring leading lady.  Gerwig’s Violet is verbose and articulate like many of Stillman’s previous characters, but she exists in a closed-off bubble of reality that allows her to see herself as a tastemaker and leader.  She’s a debutante in a world that no longer has any need for one.  Her anachronistic personality even extends to her wardrobe, which takes its cues from midcentury and 80’s designers.

As the primary love interest and duplicitous player Fred, Adam Brody sheds his nerdy The OC persona and assumes an air of confidence and sophistication that would make Seth Cohen seethe with envy.  First seen in a suit posing as a clean-cut businessman and buying drinks for girls at the bar, Fred reveals himself to be just another student at the university.  Competing with Violet for his affections is the discretely charming Lily, played with an innocent curiosity by Analeigh Tipton.  It’s almost her story as much as Violet’s, and her character is grounded enough in reality that the audience can access this peculiar world through her eyes.  As Violet’s partners in crime, MacLemore and Echikunwoke are likable and funny in their own ways.  It’s worth noting that Echikunwoke stands out as the first real character of color in a filmography dominated by the white bourgeoisie.

DAMSELS IN DISTRESS is the first film by Stillman where it’s evident that a concerted effort was made to cast recognizable faces, and Stillman assembles a large chunk of his supporting cast from the zeitgeist of television comedy.  Aubrey Plaza, from PARKS & REC, is hilarious as a more talkative, goth version of herself.  Alia Shawkat (Maebe from ARRESTED DEVELOPMENT) has a great cameo as a disgruntled student looking for quiet.  Zach Woods, of THE OFFICE fame, has a substantial role as the wannabe-bad-boy editor for the school’s newspaper.  His characterization is reminiscent of the kind of stock Stillman character that Chris Eigeman would play, so I can’t help but speculate that maybe Stillman sees in Woods a new cinematic surrogate.

Fans of Stillman’s work will also recognize a cameo by regular collaborator Taylor Nichols, who plays a college instructor named Professor Black.  Nichols’ character in 1990’s METROPOLITAN was named Charlie Black, and since THE LAST DAYS OF DISCO proved that Stillman’s filmography is its own self-contained universe, it’s not unthinkable that Nichols is reprising his METROPOLITAN character twenty years on.

To round out the casting, Stillman throws in a handful of male characters who come off more like bumbling idiots than functional young adults.  While sophisticated and refined, secondary Lily love interest Hugo Becker still turns out to be driven primarily by his ego and his libido.  Becker gamely tackles Stillman’s complicated dialogue even though he has to garble it through a thick French accent.  As Violet’s ex, Frank, Ryan Metcalf is a highly erratic presence.  First presented as a suave, well-dressed ladykiller, he quickly degenerates into a schlubby buffoon with an intelligence bordering on retarded.  The most puzzling part of this arc seems to be that there’s no real reason for it, other than to inject some broad humor.

For his first film in over a decade, Stillman collaborates with a new Director of Photography: Doug Emmett.  Together, they recreate the classic Stillman aesthetic but update it for the 21st century.  The (possibly digital?) image is natural and filmic, with high contrast and even colors favoring a warmer tone.  Stillman sticks to his usual bag of visual tricks: medium close ups, 2-shot framing, locked-off tripod set-ups limited to pans and fluid dolly moves, etc.  However, he finds ample opportunity to switch up his presentation.  For the first time in his filmography, Stillman incorporates a series of flashback vignettes depicting Violet during her childhood.  It’s a small departure, to be sure, but it definitely shows that Whitman has a vision for the expanded world beyond the story.

While he changes up his visual collaborators, Stillman sticks to his working relationship with Mark Suozzo for the film’s music.  Unlike his barely-there effort for THE LAST DAYS OF DISCO, Suozzo’s contributions are front and center in informing the overall tone of the film.  Composed of poppy, almost air-y piano chords and synths, Suozzo creates a whimsical feeling that harkens back to midcentury compositions as well as contemporary works like Air’s score for Sofia Coppola’s THE VIRGIN SUICIDES (1999).  Stillman also uses the music to inform his characters to great effect.  One standout moment is Violent’s observation about hearing a Eurythmics song at a party: “Oh, it’s a golden oldie.  I love these!”.  Such a weird, fantastic little moment.

After four feature films, Stillman’s approach to structure hasn’t differed drastically, which makes it easy to chart how he constructs his stories.  Just like his previous films, Stillman begins the film with an old-school, minimalistic credits sequence set to score.  This is perhaps a great window into his aesthetic, as the titles (like his stories) are very straightforward and non-flashy.  He prefers to share his director credit on-screen with other collaborators, which is a refreshing change of pace in such an ego-driven profession.  The film is broken up into chapters, not unlike a book (arguably a reference to Stillman’s literary preoccupations).  The story itself, dealing with a girl’s inclusion in (and subsequent delusionment of) an exclusive, privileged social clique, reads like a female-centric mirror of METROPOLITAN.  Indeed, the characters of both films are around the same age.

The tone of the film is very peculiar, in that it takes place in a kind of overmedicated haze.  It’s like the film was bathed in an elixir of Prozac and Ritalin, but I suspect that may be intentional on Stillman’s part.  The exertion of power among the various social cliques plays like a nerdy MEAN GIRLS.  As such, the comedy is very deliberate and a little loopy, which under Stillman’s direction can be either hit or miss.  For instance, Stillman includes a brilliant scene where a would-be suicide is thwarted by the fact that the young death-aspirant jumps from a two story porch and merely maims his legs.  Conversely, Stillman includes a weird lip-sync musical dance number (complete with stylized golden lens flares) followed by an instructional sequence on how to dance the “Sambola!” as the film’s ending.  It’s so bizarre and out of place that it took me out of the film entirely.

DAMSELS IN DISTRESS, ultimately, is a very polarizing experience.  I’m still not quite sure how I feel about it.  It’s at once both charming and abrasive, sumptuous and off-putting.  The comedy veers from subtle to near-fart-level zones of broad humor.  After building such a strong body of work with his Yuppie Trilogy, Stillman’s first work in thirteen years is lackluster and oftentimes dull.  Despite great, valiant performances from his cast, the story sinks under the weight of its own pretensions.  Every filmmaker seems to have a work in which he is working at his most indulgent, and it appears that DAMSELS IN DISTRESS is that work for Stillman.  Those who are familiar with his films will find something they can recognize and connect with, but I’m afraid that the uninitiated will find the story mostly inaccessible.

As of this writing, DAMSELS IN DISTRESS is Whit Stillman’s most recent work.  His career thus far has found him working mainly as a prominent, influential voice in independent cinema.  Just as Preston Sturges and Woody Allen informed Stillman’s aesthetic and characterizatoin, so have his depictions of the East Coast elite influenced numerous younger filmmakers like Noah Baumbach and Wes Anderson.  His style didn’t evolve or change like many others of his generation, but the “sameness” of his films speaks to a larger truth.  In just four features, he has cultivated a whimsical, self-contained universe with the urban bourgeoisie at the center.

With the realities of the modern world gathering ominously on the fringes of that universe, Stillman’s guiding artistic preoccupation becomes clear.  It’s this author’s opinion that Stillman is compelled to make art because of his fascination with the decline of the debutante in a democratized world.  Perhaps it’s a morbid interest, as he is every bit the privileged, educated WASP that his characters are.  His films are eulogies for a cherished way of life that only a select few get to experience.  So why does he make comedies?  Well, everyone knows that the best eulogy is the one that makes people laugh.