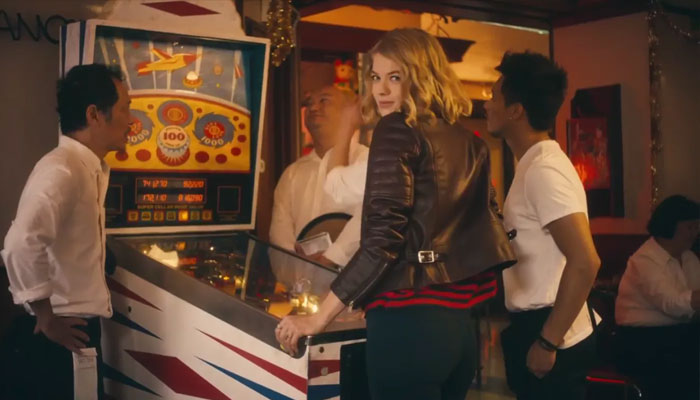 In 2014, the iconic clothing brand Gap released a new campaign called “Dress Normal”, embracing their cultural reputation as purveyors of tried-and-true, inoffensive “normcore” staples like jeans, t shirts, and sweaters.  The campaign launched with a quartet of stylish monochromatic spots shot by David Fincher that channeled a midcentury avant-garde quality with cutting-edge digital cinematography techniques.  As the 2014 holiday season approached, Gap began to build another collection of spots with the intent of finding another high-profile director known for his or her own stylistic sensibilities.

The decision to go with director Sofia Coppola seems like a natural one in retrospect– just as natural as the low-key, grounded tone that her unique worldview brings to a suite of 4 spots that promote Gaps’ holiday sweaters and jackets.  Each spot tells a short, comical vignette set to music; “PINBALL” shows how a young woman uses a casual game of pinball as a seduction technique.  “CROONER” finds a precocious little boy lip syncing into a microphone to a living room full of people who aren’t even listening.  “MISTLETOE” details an awkward young man’s bold attempt to steal a kiss from an older woman (probably his friend’s mother) under the eponymous Christmas staple.  “GAUNTLET” features a young girl visiting home after being away at school and having to endure the touchy-feely reception of her family members.

This particular suite of “DRESS NORMAL” spots don’t hold much in the way of Coppola’s thematic signatures– in fact, they mark a departure from her portraits of privileged celebrity lifestyles in favor of naturalistic glimpses of young people from a comfortable middle-class background.  Indeed, after creating spots primarily for high-fashion brands like Christian Dior or H&M, Coppola’s taking on an assignment from Gap shows her widening her directorial reach to a wider audience with conservative tastes.  Her light, observational touch is an inspired and appropriate choice for the cheery, upbeat nature of these spots, helping to make Gap’s holidays (and subsequent sales numbers) that much brighter.