In the mid-80’s, director Steven Spielberg had begun to hit his stride as a feature filmmaker.  After the expected success of 1984’s second installment of the Indiana Jones saga, INDIANA JONES AND THE TEMPLE OF DOOM, Spielberg surprised his fans with a return to the medium that created him: television.  In 1985, he joined up with his Amblin producing partners Kathleen Kennedy and Frank Marshall to create AMAZING STORIES, an anthology-format show that would run on NBC until 1987.  AMAZING STORIES takes its title from the science fiction magazine of the same name, and is notable (to me at least) for its hilarious opening credits, which feature terrible CGI in its earliest incarnation.  Spielberg himself developed a substantial number of the episode stories, yet only directed two of them: GHOST TRAIN and THE MISSION. 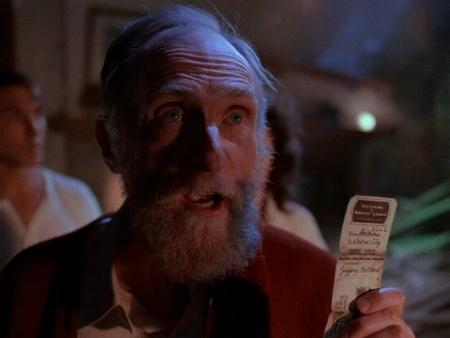 GHOST TRAIN begins in typical Spielberg fashion—an idyllic, Norman Rockwell-esque family moves to a new house in the suburbs, with the frail patriarch/grandpa Opa Globe in tow.  Just as soon as they arrive, Opa begins to ramble about a train whose track used to run right through where their house currently stands.  The train derailed one night back when he was a child, and he’s been obsessed with it ever since.  He soon becomes convinced that the train is returning to pick him up, despite there no longer being a train in those parts.  Only his grandson Brian believes him, with his grown son Fenton and his wife Joleen convinced that he’s gone senile.  However, one night the train does arrive, just as Opa said it would: right through the middle of their living room.

Spielberg uses a cast of mostly unknowns for GHOST TRAIN, with Robert Blossom being the most recognizable face as Opa Globe (people my age will remember him fondly as the creepy shovel guy from HOME ALONE (1990).  In GHOST TRAIN, Blossom is basically playing the same character, only less creepy.  Scott Paulin plays Fenton, Opa’s disbelieving son and father to Brian, while Gail Edwards plays Fenton’s equally-cynical wife Joleen.  Lukas Haas– only a child here– plays wide-eyed and optimistic Brian, fitting well into the frustrated, innocent child archetype that Spielberg is fond of.  Haas had yet to hit puberty when he shot GHOST TRAIN, but the natural talent that would lead him to working under the likes of Gus Van Sant and Christopher Nolan is already evident here.

Cinematographer Allen Daviau returns, which results in a piece that feels very much like E.T. THE EXTRA-TERRESTRIAL(1982) in presentation.  While Spielberg’s composition suffers from the confining 4:3 aspect ratio dictated by the television medium, his tone still feels distinctly familiar.  Naturalistic, muted colors fill the frame, while a pop of ethereal green lighting creates a mystical, magical aura to the climatic train arrival sequence.  Rick Carter, who would go on to become Spielberg’s regular production designer, finds his first collaboration with the director here.  John Williams is once again on music duties, crafting a score that’s not exactly memorable, but unmistakably his.

Several of Spielberg’s key directorial conceits are present in GHOST TRAIN.  Most notable is the presence of kids, which justifies Spielberg’s adoption of their innocent, untarnished perspective.  As a result, the tone feels whimsical and sentimental.  The absent father trope is also present, manifested in the strained relationship that both sets of sons have with their respective fathers.  Train imagery also runs throughout Spielberg’s work, oftentimes in the form of a toy train set chugging through the living room as it did in CLOSE ENCOUNTERS OF THE THIRD KIND (1977), as well as GHOST TRAIN.

Spielberg’s other episode, THE MISSION, is far more affecting and better crafted than GHOST TRAIN.  Set during World War 2, THE MISSION is about an Air Force squadron sent up on their 24th mission into enemy territory to drop some big bombs.  Along the way, they encounter heavy bombardment and take heavy damage to the plane, but come through victorious.  Unfortunately, the gunner in the turret underneath the craft is trapped by debris spewed forth from the enemy plane’s explosion, and to make matters worse, their landing gear won’t deploy.  Tension and emotions flare as the plane limps back to home base and their efforts to free the gunner from his claustrophobic prison fail.  As the situation becomes more dire, the men have to reckon with internal conflicts and decide whether they can salvage the situation, or give their friend the blessing of a mercy killing before he’s crushed to death upon landing.

THE MISSION boasts some high-profile cast members, albeit they’re high profile only in hindsight as THE MISSION was filmed before their careers took off.  Kevin Costner plays the Captain—the superstitious, paternal pilot and leader to the men.  He’s not given the kind of attention on-screen that you would expect for someone of his stature, but keep in mind he wasn’t universally-known at this point in his career.  Keifer Sutherland plays Static, an aspiring engineer and the brains of the ship.  It’s a sensitive turn for Sutherland, who is better known for his knack for cracking skulls on 24.  Relative unknown Casey Siemaszko gives the most captivating performance as Jonathan, the gunner trapped underneath the plane.  His increasing hopelessness and despair is palpable, making for some extremely moving movement as the story approaches its climax.

To shoot THE MISSION, Spielberg hires cinematographer John McPherson—his first collaboration with this particular DP. THE MISSION differs drastically in visuals to GHOST TRAIN, featuring a mostly-gray, smoky color palette and handheld camerawork that amplifies the cramped nature of the aircraft set.  THE MISSION also sees Spielberg working for the first time with the nascent tool of CGI, which is deployed in service to the cartoonish, yellow landing gear that miraculously saves the day.  This being the early days of CGI and all, it absolutely does not fit in with the realism of the other visuals.  Rick Carter and John Williams return as Production Designer and Composer, respectively- with the latter adapting the Air Force anthem (“Into The Wild Blue Yonder”) as a recurring musical motif.

Spielberg’s hand in directing THE MISSION is quite evident.  The WW2 imagery and setting allows him to indulge in the trappings of his favorite time period and the romanticized iconography of flight (no doubt inspired by the stories his WW2 vet father told him upon returning from the war).  The tone is sentimental, with a moving dramatic arc that hammers home despite being a little overwrought in some instances.  THE MISSION is frankly one of Spielberg’s best narratives, and would adapt well into the feature-length format.  In terms of his television work, it’s easily his best (to date).

Spielberg’s work with AMAZING STORIES is indicative of his embracing the role of producer/developer, whereby he’s creating a television series and shepherding it through several seasons.  Much of Spielberg’s current success and wealth derives from his participation as a producer or executive producer in dozens of films, almost as if he was diversifying his portfolio in the business/investment sense.  AMAZING STORIES is one of Spielberg’s less-successful projects, ending its run after only two seasons and quietly immigrating into the syndication market for a few years thereafter.  But as his grand return to the television medium, Spielberg is able to channel his experience in directing features and apply its sensibilities into markedly improved TV work.