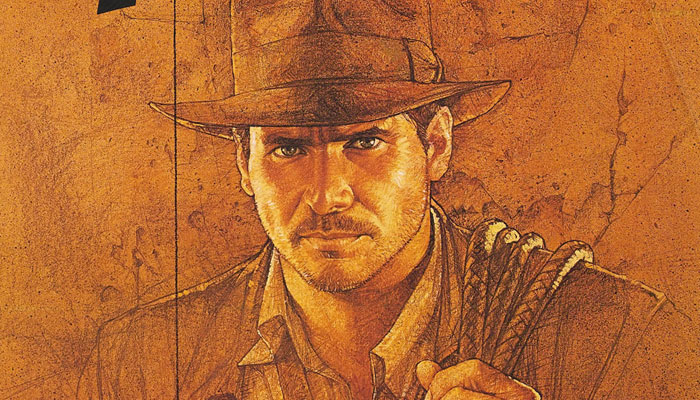 Inducted into the National Film Registry- 1999

Indiana Jones.  Few names have such cultural cache, fewer characters are so instantly iconic.  Indiana Jones and his adventures have tapped into an inherently American psyche, channeling a Theodore Roosevelt-esque masculinity in its attitude towards danger and mystery.  He is a mythic character that was given breath by an inspired Harrison Ford, a performance that defies the ravages of time (even as it acknowledges their inevitability like it does in the fourth installment of the series).  As long as movies are around, there will always be Indiana Jones.

The failure of 1979’s 1941 was a sobering experience for director Steven Spielberg.  Thinking he was untouchable because of JAWS’ (1975) and CLOSE ENCOUNTERS OF THE THIRD KIND’s (1977) mega-success, his indulgent approach to 1941’s making led to its shaming at the box office.  Shaken by his sudden mortality, Spielberg knew that he needed to bring his best to the next project, lest it be his last.

Spielberg turned his attention to an idea he had first heard about from his filmmaking pal, George Lucas.  It was the summer of 1977, and the two were vacationing in Hawaii to escape the hullabaloo over STAR WARS’ record opening.  As they built sandcastles on the beach, Spielberg mentioned his dream of making a James Bond film.  Lucas replied that he had something better:  a callback to the cliffhanger serials of Hollywood’s Golden Age featuring a rugged character named Indiana Smith.  Spielberg suggested the Jones surname might be better, and a cinematic institution was subsequently born. Despite Lucas’ STAR WARS clout backing their collaboration, the duo’s idea was rejected by every studio in town until it finally found a home in Paramount.  The result?  1981’s RAIDERS OF THE LOST ARK—one of the biggest, most-cherished films of all time. 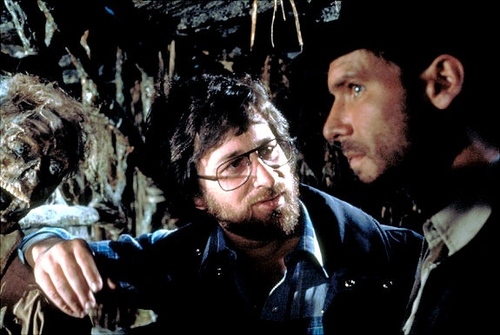 As depicted in RAIDERS OF THE LOST ARK, Indiana Jones is a mild-mannered archaeology professor by day, and an adventurous, death-defying tomb raider by night.  He serves as an independent contractor, recovering priceless relics from the bowels of antiquity for museums and academic preservation.  His latest assignment has him tracking down the Ark of the Covenant, the chest built by the Israelites said to contain the remnants of the Ten Commandments.  To accomplish this, Indy will need to team up with his feisty ex-lover and the daughter of his mentor, Marion Ravenwood, while racing against the efforts of the Nazis– who plan on recovering the Ark for their own nefarious purposes.  The action is sprawling, taking Indy to such far-flung places as Nepal and Egypt in pursuit of the lost Ark.

By 1981, Harrison Ford was already internationally famous for playing the role of Han Solo in STAR WARS and THE EMPIRE STRIKES BACK (1980).  Lucas initially didn’t want Ford to play Indy for fear of overexposure, but Spielberg won out.  In taking on the role of Indiana Jones, Ford escaped the STAR WARS typecasting curse that afflicted his co-stars Mark Hamill and Carrie Fischer.  Not only that, he arguably created a performance in Indiana Jones that would define his career. He inhabits the role so naturally that no other actor could ever replace him.  The fact that Ford’s rugged, gruff characterization is still a model of masculinity for millions of men is a testament to the character’s enduring quality.

For all his skill and wit, Indiana could never make do without the help of his friends and the challenges of his enemies. Karen Allen, then a stage actress from New York, plays Marion Ravenwood with a tough, yet feminine air.  She can hold her own, often proving to be every bit Indiana’s equal (out of all the women Indiana is shown to be romantically involved, there’s a reason that Marion is the only one he actually has children with).  Spielberg’s career up to this point had been littered with lackluster female characters, so Marion Ravenwood is easily his most-fully realized yet.

Paul Freeman plays Dr. Rene Belloq, a sophisticated rival archeologist in the Nazi’s employ.  Freeman’s performance is charming but deceitful, and his dedication to his craft is palpable—at one point, he swallows a fly that randomly lands on his lips without blinking or breaking character.  Jonathan Rhys-Davies finds an iconic role for himself in Sallah, Indiana’s Egyptian ally.  Rhys-Davies plays the character as jovial and boisterous, giving the film some inspired comic relief. Furthermore, Alfred Molina makes his film debut as Satipo, a colleague of Indiana’s in the prologue who dies after betraying our hero.  Always interesting to see the humble beginnings of such a seasoned character actor as Molina.

In shooting RAIDERS OF THE LOST ARK, Spielberg turns to a new cinematographer, Douglas Slocombe.  Slocombe crafts an appropriately epic feel using the panoramic 2.35:1 anamorphic aspect ratio and warm, natural colors that evoke a romantic, swashbuckling tone.  Spielberg’s camerawork matches the impressive scope, infusing an exhilarating sense of energy and scale through the unrelenting use of dolly and crane movements.  Production designer Leslie Dilley brings an authentic, dusty air of mystery to the set design, while returning editor Michael Kahn blends it all together, in the process managing to create an entirely new visual language for the adventure genre.

John Williams is back on scoring duties, creating his single most recognizable theme outside of STAR WARS.  The “Raiders March”, as it was known on the cue sheets, is heroic and appropriately adventurous while infusing hints of Old-World, biblical mystery.  It’s the kind of theme that most composers will struggle their entire lives to create just one of, but Williams churns these iconic cues out with an almost-superhuman ease.  William’s contribution to the Indiana Jones series is incalculable—without its rousing music, the series would not be nearly as effective and memorable as it is.

With Spielberg’s fifth professional feature, his style has coalesced into something imminently recognizable.  RAIDERS OF THE LOST ARK represents Spielberg’s aesthetic operating at its best, an ironic fact given that the schedule was so tight that the director barely had time to consider aesthetic.  The film appropriates a gritty edginess, eschewing the glossy indulgence that sank 1941.  Spielberg also employs direct lens flares to amplify the scorching sun of the Egyptian desert.  I had seen RAIDERS OF THE LOST ARK several times previously (who hasn’t?), but on this particular viewing, I was uncharacteristically sensitive to the amount of violence on display.  For a Spielberg film, it is surprisingly graphic, what with the on-screen bullet wounds and exploding heads.  There’s a tone at play here that skirts the line between PG and R, and it would eventually lead directly to the creation of the PG-13 rating with the series’ second installment, INDIANA JONES AND THE TEMPLE OF DOOM (1984). 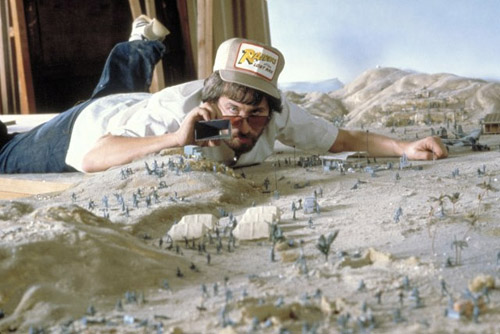 A combination of a great character, unparalleled talent, and a strong vision, RAIDERS OF THE LOST ARK finds Spielberg at the peak of his powers.  He knew that he had to create something truly great in order to come back from the failure of 1941and reinforce his reputation as a blockbuster director.  In the undertaking of RAIDERS OF THE LOST ARK, Spielberg demonstrates his mastery of that time-honored staple of the spectacle genre: “the setpiece”.  RAIDERS OF THE LOST ARKis littered with several, distinctive and memorable setpieces: the boulder-rolling opening, the bazaar chase, getting trapped in the Well of Souls, the truck chase, etc.  And of course, who can forget that infamous ending shot of the Ark all boxed up and stowed away in a warehouse that seems to stretch on towards infinity? It’s the perfect note to end the film on, with each mysterious crate suggested an endless universe of adventures that lay in store for Doctor Jones.

Each sequence is given an incredible attention to detail, and Spielberg’s thorough preparation leads to well-structured sequences where character isn’t lost among the action. Spielberg’s natural ability to deliver well-executed setpieces is arguably his most valuable asset as a filmmaker, allowing him to turn in iconic film after iconic film.  As such, his films feel like full-bodied experiences that invite the audience to actively participate.

As we all know, RAIDERS OF THE LOST ARK was a box office hit upon its release, restoring Spielberg to critical and financial glory. It won several technical Oscars, but also netted Spielberg his third and second Oscar nominations for Best Picture and Director, respectively.  It also established the Indiana Jones franchise, which has generated untold millions in revenue in the form of sequels, TV shows, action figures, Disneyland rides, etc.  It endures today as one of the most-cherished and loved films of all time, and despite its age, feels truly timeless.  The film’s future was secured in 1999, when it was deemed culturally significant and worthy of preservation by its induction into the National Film Registry.

By this point in his career, RAIDERS OF THE LOST ARK was easily the biggest production Spielberg had ever mounted, and he pulled it off with grace and style.  Having atoned for the disaster that was 1941, Spielberg was back on top of his game, and proved to the world that he was here to stay.

RAIDERS OF THE LOST ARK is currently available on high definition Blu Ray from Paramount.