At its heart, the filmography of director Darren Aronofsky is concerned primarily with the conflict between faith and reason.  His stories find his protagonists as otherwise reasonable people laboring under some kind of delusion– a washed-up wrestler believes he’s on the verge of a comeback; a ballet dancer thinks she’s transforming into an animal; an intellectual pursues his late soulmate across time and space.  This line can be traced all the way back to his feature-length debut: the paranoid mathematics thriller, PI (1998).  One of the scrappiest debuts in recent memory, PI stages itself as a frenzied showdown between faith and reason in which a reclusive mathematician employs numerology in a bid to predict the stock market, only to unwittingly entangle himself with a cabal of hasidic Jews intent on decoding the true name of God.

As any proper debut feature should, Aronofsky’s script draws heavily from personal experience.  Set in his native New York City, the story finds inspiration in Aronofsky’s Jewish upbringing, which de-emphasized the religious aspects in favor of its cultural experience.  As a result, Aronofsky was raised to embrace his faith at arm’s length, always regarding it with a critical eye while never discounting its importance as an emotional motivating force.  PI reflects this rather literally as it charts the plight of its protagonist, the brilliant recluse Maximillian Cohen.  Portrayed by SUPERMARKET SWEEP’s Sean Gullette, Max suffers from debilitating cluster headaches, which prompts him to shut himself off from the outside world and sit before his homemade computer named Euclid as it spits out a random sequence of numbers he hopes will bring him riches on the stock market.  On the rare occasion he ventures outside his Hell’s Kitchen apartment, he tends to visit a retired Columbia professor and mentor figure named Sol Robeson.  A crucial bridge between Max’s logic-based perspective and the fanciful designs of the hasidic Jews, Sol is played by seasoned character actor Mark Margolis, easily the most recognizable face in the film.  When Max’s computer spits out a 216-digit number that he initially dismisses as nonsense, Sol is uniquely suited to convey the number’s spiritual significance, thus setting up Max’s increasingly perilous association with a pushy hasidic Jew named Lenny Meyer (played by Ben Shenkman), who sees Max’s mysterious number as the answer to a longtime mystery involving the true name of God that, when uttered aloud, will bring about the messianic age.

Aronofsky’s approach to PI’s distinct visual aesthetic is unavoidably shaped by its relatively paltry $68,000 production budget, but by no means is it limited by it.  In an era where shooting on video was becoming increasingly accepted, Aronofsky’s choice to shoot on film is a notable and vital one.  Working once again with his film school cinematographer Matthew Libatique, Aronofsky positions PI as not just a story told from Max’s perspective, but as a subjective experience totally contained within the confines of his mind.  Gullette’s noir-style voiceover plays a substantial role in this regard, but it is Aronofsky and Libatique’s extremely gritty and abrasive cinematography that can claim most of the responsibility.  PI’s radical high-contrast look stems from its acquisition onto black and white 16mm reversal stock, which foregoes the negative process by producing a positive print right out of the gate.  The savings in processing time are offset by a decreased latitude and an exaggerated grain structure, which in Libatique and Aronofsky’s hands results in a rough 1.66:1 image that resembles the earliest days of photography.  They push this conceit even further via harsh lighting setups and claustrophobically-tight compositions.  The camerawork reveals PI’s shoestring-budget origins, foregoing luxurious tracking shots in favor of simple locked-off setups and jittery handheld movements.  Several of Aronofsky’s technical signatures make their feature debut in PI, like rapid-fire activity inserts that portray a physical action like shutting a door or popping pills in a hyper-exaggerated manner, or a disruptive camera technique that has since become known as Snorricam, whereby the camera is rigged to the actor’s body with the lens pointing towards him, selfie-style.  This results in an effectively unsettling composition that anchors the actor firmly in the center of the frame while the background whirls and spins around behind him.  Aronofsky’s technical approach is even more impressive when considering that the entire film was shot guerrilla-style, having never secured any permits for their various locations.  PI also marks the first collaboration between the burgeoning director and his longtime composer, Clint Mansell, whose breakbeat electro-grunge score relentlessly pushes the action forward while becoming the musical equivalent of a drill corkscrewing its way into your head.

PI establishes several concepts and ideas that have since become key artistic signatures of Aronofsky’s.  Beyond the aforementioned religious themes that deal specifically with the director’s native Judaism, PI shares his profound intellectual curiosity– exemplified by Max’s efforts to find mathematical patterns in the flow of life around him, as if to “decode” the ways of nature itself.  The film takes great pains to point out how concepts like the Fibonacci Spiral and the Golden Mean recur naturally across a wide of biological phenomena, giving a semblance of mechanical order to the relative chaos of evolution.  The terror of the human experience is another major theme that courses through Aronofsky’s work, whether it’s the theatrical horror of films like REQUIEM FOR A DREAM (2000) and BLACK SWAN (2010), or the lower-key existential fear of oblivion and obscurity in films like THE FOUNTAIN (2006) and THE WRESTLER (2008).  PI establishes this artistic conceit via the perils of genius, whereby Max’s staggering degree of intelligence is both a blessing and a curse.  His mental powers endow him with an almost supernatural talent with mathematics, but they come at the price of his chronic, crippling headaches.  Aronofsky seems to ask: “how smart is too smart?”, as Max becomes so consumed by his need to decode the meaning behind the mysterious number sequence that he feels the need to literally drill into his brain as a means to make it all stop.  This idea of knowledge as a curse dovetails obliquely, but rather nicely, with Aronofsky’s exploration on religion, as it was Eve’s eating from the Tree of Knowledge of Good and Evil that cast her and Adam from the Garden.  Aronofsky further peppers PI with little artistic quirks, like having the actor from his student short FORTUNE COOKIE reprise his creepy pervert character in a scene on the subway, or having Max take a trip out to Coney Island– the primary setting of his next film, REQUIEM FOR A DREAM. 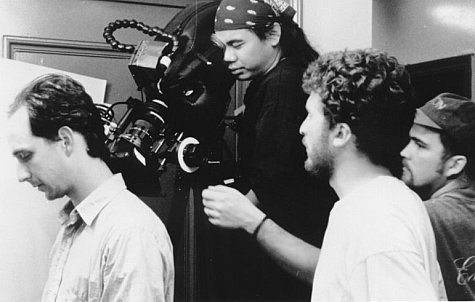 Considering its origins as a scrappy shoestring indie with an unproven director, no recognizable talent and an admittedly abrasive visual aesthetic, it’s fair to say that PI’s creators probably didn’t fully anticipate the degree of success their film would go on to achieve.  PI debuted at the 1998 Sundance Film Festival, where its buzz as one of the most talked-about films that year propelled Aronofsky to his first major career award: the festival’s prestigious Directing Award.  Artisan Entertainment acquired PI at the festival for $1 million, its investment paying off when the film went on to gross $3 million in its theatrical release.  The film world responded positively to Aronofsky’s arrival, awarding him the Independent Spirit Award for Best Screenplay, and eventually giving PI the distinction of being the first feature film available for download on the internet (1).  Through sheer labor and fortitude, Aronofsky had kicked off his career in earnest, with PI establishing him as a maverick visionary poised to take the indie film world by storm.