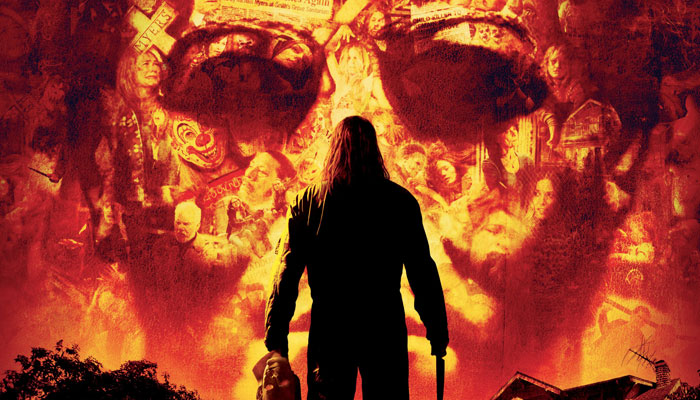 The original HALLOWEEN (1978), directed by John Carpenter, not only redefined the horror genre, but independent film as well.  It set the course for the ensuing two decades, giving birth to the slasher subgenre and a veritable rogue’s gallery of boogeymen in Jason, Freddy, Chucky, and Pinhead.  But one name stood above them all: Michael Myers.  The serial killer otherwise known as “The Shape” had gone through no less than eight outings by 2007, and by the point the series had become decidedly stale.  The success of Christopher Nolan’s BATMAN BEGINS in 2005 proved to studios that audiences would accept, even welcome, old properties that were rebooted for our modern age.   Nolan’s groundbreaking vision for Batman emboldened studios to pursue equally strong-minded directors for high-profile properties in need of creative refreshing.  With this in mind, Dimension Films and the Weinstein Brothers courted director Rob Zombie to reboot theHALLOWEEN franchise.  Coming off the success of THE DEVIL’S REJECTS (2005), Zombie had previously cited Carpenter’s HALLOWEEN as a key influence in his own aesthetic—naturally, hiring Zombie to breathe new life into a monster that had been left for dead was a no-brainer.

Despite obtaining Carpenter’s blessing (who told Zombie to run with the material and make it his own), the announcement of a HALLOWEEN reboot with Zombie at the helm was met with massive fanboy outrage.  As a fan of the series himself, Zombie knew how delicate the situation was, so he approached the shoot with a meticulous eye for detail and a desire to merge his own aesthetic with Carpenter’s iconic story.  Simply put, HALLOWEENwas the biggest film of Zombie’s career, both in scale and stakes.  Debuting in the very un-October month of August because some chicken-shit executives didn’t want to open against the reigning, annual SAW franchise and its Halloween-time slot, Rob Zombie’s HALLOWEEN enjoyed a healthy run of success despite its reputation as a controversial, massively un-even film.

Zombie’s HALLOWEEN is split into two distinct narrative halves: the 1970’s and the present day.  The 1970’s segment concerns a young Michael Myers (Daeg Faerch) growing up in an abusive household and exhibiting symptoms of mental instability.  One day at school, a bully drives him to commit his first murder, and then on Halloween night he butchers his entire family (save for his mother Deborah (Sheri Moon Zombie) and baby sister Boo).  He’s placed in a sanitarium where he languishes for the next fifteen years, visited occasionally by his increasingly-distant mother and a gentle psychiatrist named Dr. Sam Loomis (Malcom McDowell).  As the years go by, he grows into a silent, hulking monster who hides his face behind an array of homemade masks.  In the present day segment, Michael finally escapes and returns home to Haddonfield to track down his one remaining family member, Boo—now living a blissfully unaware existence with her foster parents as Laurie Strode (Scout Taylor Compton).  With his reign of terror once again occurring on Halloween night, Michael Myers proceeds to kill everyone who tries to stop him from getting to Laurie.  It’s up to Sheriff Brackett (Brad Dourif) and Sam Loomis to stop Myers before he claims the entire town.

Jamie Lee Curtis’ performance in the original HALLOWEEN is a hard act to follow, so newcomer Scout Taylor Compton paints an entirely different portrait of the innocent, virginal Laurie Strode.  If anything, her performance raises an interesting comparison of how teen girls have changed over the course of thirty years—their clothes, sense of humor, open-ness about sexuality, etc.  Compton updates Strode for the new century, giving her an edge while simultaneously making her geekier than Curtis ever was.  In the absence of the role’s originator Donald Pleasance, Malcom McDowell is incredibly inspired casting as Dr. Sam Loomis.  McDowell’s Loomis is a cold intellectual, prone to fits of ego and theatricality.  He’s less a voice of authority than a thorn in the side of authority.  Even those who savaged the movie upon its release generally agreed that McDowell’s performance was one of the highlights.  As the iconic Michael Myers, Tyler Mane also has huge shoes to fill.  Denied the ability to emote or speak, let alone show his face, Mane instead has to rely on his massive, intimidating frame to convey menace.  To his credit, he does this extremely well, bringing a monstrous quality to Myers while eliminating some of the supernatural spookiness found in earlier incarnations.

As the supporting characters are nowhere near as iconic as Laurie Strode, Michael Myers or Sam Loomis, Zombie is able to safely infuse them with his trademark redneck qualities, especially in his re-definition of the Myers family.  As the young Michael, Daeg Faerch is a strange-looking little boy.  I can certainly see why he was handpicked to play a future mass murderer.  He’s pretty adept at playing weird and mentally disturbed, so I can’t imagine that his performance won him too many new friends at school.  Zombie once again casts his wife, Sheri Moon, in a pivotal role.  Here, she plays Michael’s mother Deborah, essentially a single mother who has to strip to make ends meet.  She’s a supporting, nurturing presence for Michael, but even she can’t stop the tragedy that’s coming.  In terms of Sheri Moon’s career, HALLOWEEN sees her best performance so far as a tough, conflicted mother.

Another Zombie player, William Forsythe, assumes the role of Ronnie, Deborah’s disabled, deadbeat live-in-boyfriend.  As an openly hostile force in the young Michael’s life, his is a murder that’s very well deserved.  Danielle Harris plays Annie Brackett, Laurie’s athletic, sarcastic friend.  Harris herself is a fixture of the HALLOWEEN franchise, having played Laurie’s daughter in two previous installments.  Brad Dourif plays her father, Sheriff Lee Bracket.  Dourif is the under-prepared voice of authority and law in the film, and while he’s a little redneck-y in his own right, he’s got his priorities straight and serves as a great source of conflict given his moral opposition to the Loomis character.  For the most part, Zombie’s repertory of regular performers is relegated to smaller roles and cameos.  Danny Trejo, Lew Temple, Tom Towles, Leslie Easterbrook, Ken Foree and Sid Haig all are present but have severely limited screen time as a result of the story’s already-crowded cast of characters.

Phil Parmet returns to Zombie’s fold as the Director of Photography, giving the 2.35:1 35mm film image a different visual approach for each act.  The first act—Michael’s initial wave of murders as a child in the 70’s—is drained of color and light, opting for a handheld, grungy look.  The sanitarium sequences in the second act are mostly static and locked-off, emphasizing the cold, clinical nature of Michael’s surroundings via oppressively symmetrical lines and bright, neutral light.  Zombie often frames the characters in this act as very small within the frame, dwarfed by the immensity of the uncaring institution around them.  The third act becomes essentially a remake of the entirety of Carpenter’s original film, with Michael escaping the sanitarium and stalking Laurie Strode back in Haddonfield.  These scenes are rendered in a de-saturated, autumnal color palette, as well as in steadicam shots that bring a classical, elegant energy to the piece.  Of course, when the murders start, the film shifts back to the cold, blue handheld compositions we saw in the first act—Michael has come home.

Production Designer Anthony Tremblay does a great job turning Pasadena and Hollywood in the early spring into an autumnal Illinois.  It starts with inspired location choices, solidifies with smart set dressing and large amounts of fake leaves and Halloween decorations, and ends in postproduction color grading with Zombie and Parmet draining all of the green from the color spectrum to further sell the autumn vibe.

Returning composer Tyler Bates really had his work cut out for him when it came to creating the score for HALLOWEEN. Carpenter himself created such an iconic suite of cues for the original, in the process making the theme an indispensable seasonal staple.  Bates would be damned if he simply replicated the score, and damned if he made it his own at the same time.  He managed to strike a good balance, building upon the iconic theme by giving it a grungier texture through a dissonant, electronic score built from ambient tonal elements.  True to form, Zombie also incorporates a lot of 70’s-era needledrops like Blue Oyster Cult’s “Don’t Fear The Reaper” and Nazareth’s “Love Hurts”.  One of my personal musical highlights from the film is when Zombie cheekily includes The Chordettes’ playfully morbid ballad, “Mr. Sandman”.

Zombie just might have been the perfect person to reboot the HALLOWEEN franchise, because the story is a perfect opportunity for him to indulge in all his directorial conceits.  The incorporation of Halloween imagery is such a prominent aspect of Zombie’s aesthetic that it’s redundant to even mention it.  The instance of young Michael Myers wearing a clown mask to conceal his face is indicative of the carnival imagery he’s drawn from throughout his career.  Going with a low-class “backwoods” characterization for his characters allows Zombie to dress them in long, stringy hair and beards that tend to resemble the director’s own goth rock background.  This is a very stark departure from Carpenter’s vision, but contributes to an overall grungy texture.  And finally, Zombie’s love for mixed media manifests in HALLOWEEN as McDowell’s black and white film footage documenting Myers’ childhood development, as well as 8mm home movie footage that Sheri Moon’s character tearfully watches before committing suicide.

Perhaps the biggest controversy surrounding HALLOWEEN was Zombie’s decision to build Myers’ backstory into a significant part of the running time.  The original vision of Myers as realized by Carpenter was also known as “The Shape”, a somewhat supernatural, seemingly indestructible entity that could materialize out of nowhere.  He was a relentless killing machine whose terror lied in the fact that his was an evil that was ultimately unknowable.  This all had been articulated to me by a friend of mine from my days at Lionsgate, as he worshipped Carpenter’s original and had built his own directorial aspirations with the film as its foundation.  He was infuriated by the idea of a HALLOWEEN remake in general, let alone one that would so radically redefine his favorite character in all of cinema.  Many people reacted just as strongly when presented with an inherently human Myers, one who had once been a child like us and was simply a victim of circumstance and mental illness.  They argued that this approach robbed Myers of his terrifying mystique, while others appreciated the extra layer of complexity that Zombie’s take added to the character.  Whether or not Zombie’s approach was the right way to go is endlessly debatable, but I’m personally glad this interpretation exists—if only for the sake of exploration.

HALLOWEEN was Zombie’s mainstream breakout, with the storied property delivering his aesthetic to audiences who otherwise would never have been exposed to it.  Despite its many flaws, you can’t argue that a lot of hard work and confident vision wasn’t applied in the film’s making.  The release record reflects this via a strong financial performance and equal amounts of critical praise and scorn.  By its very design, Rob Zombie’s HALLOWEEN is a deeply divisive film. Ultimately, Zombie was successful because he was able to honor Carpenter’s one request—and however you feel about the film personally, you can’t deny that Zombie didn’t make HALLOWEEN his own.

HALLOWEEN is currently available on high definition Blu Ray via the Weinstein Company.