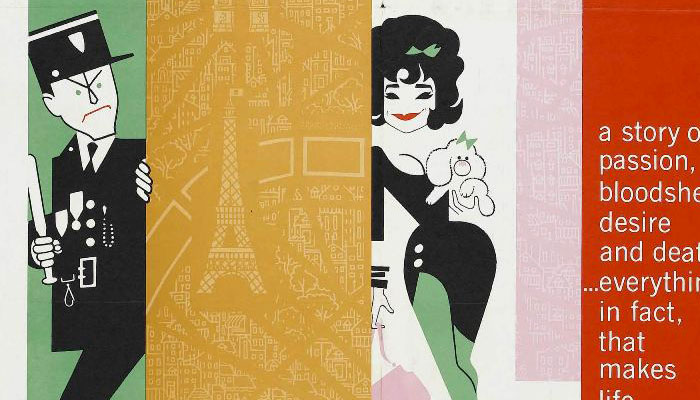 The great irony of director Billy Wilder’s life is arguably that, while he was one of the classical Golden Era’s most-lauded filmmakers, he might have been even more influential had he been born only a decade later.  By this, I mean that his desire to explore authentically complex adult relationships and controversial subject matter was hamstrung by outdated social values and an almost-Puritanical cultural attitude towards sex.  These long-held conventions were beginning to crumble away by the beginning of the 1960’s, but their timing overshot Wilder’s prime by a good eight or nine years.  He managed to catch a taste of this potential with 1960’s THE APARTMENT, which blazed new cinematic trails by directly acknowledging a widespread culture of corporate-sanctioned adultery.  1961’s ONE, TWO, THREE further dipped a toe into the water by allowing its female romantic lead to have an unabashedly liberated sexuality.  In 1963, Wilder decided to go all in with IRMA LA DOUCE, a sexually-charged and garishly-colorful comedy about Parisian prostitutes that serves up the venerated director’s most naked depiction of adult playtime yet.

IRMA LA DOUCE is based on the musical of the same name, although Wilder and writing partner I.A.L. Diamond didn’t carry over any of the original’s song or dance numbers.  The film would have reunited him with screen icon Marilyn Monroe for a third time, had she not died shortly before production began.  Instead, Wilder looked to the pair of collaborators who brought him so much success with THE APARTMENT— Jack Lemmon and Shirley MacLaine.  Lemmon stars as Nestor Pateau, a Parisian cop whose dedication to his civic duty inadvertently exposes his captain’s corrupt relationship with a bevy of sex workers and gets him thrown off the force.  MacLaine plays the titular Irma: a salty, street-wise lady of the night that’s never seen in public without her signature emerald green dress and accompanying tiny pet dog.  She takes pity on poor Nestor, and agrees to submit to him as her new pimp even as they begin a romantic relationship together.  Irma’s line of work inevitably drives the virtuous Nestor into seething fits of jealousy, so he hatches a plan with his sage confidant, the local bistro’s barkeep, Mustache (played impeccably by Lou Jacobi).  The plan is simple: impersonate a wealthy British lord and become Irma’s sole client by recycling the same large pile of cash over and over.  Nestor puts his plan into action, only to find it works too well, and has accidentally caused Irma to fall in love with his blue-blood alter ego.

Wilder may have dropped the source play’s’ musical form factor, but his adaptation of IRMA LA DOUCE is nevertheless shot and produced like one.  Joseph LaShelle’s sumptuous, Oscar-winning cinematography renders the 35mm film frame in vivid Cinemascope Technicolor, and is complimented by confident dolly and crane movements that show off the dozens of buildings and intersecting streets that constitute the massive set built by regular Wilder production designer Alexandre Trauner.  Like his previous films, Wilder opts to cover most of IRMA LA DOUCE in wide masters, using a deep focal length and reflective framing elements like mirrors, thus minimizing the need to cut away to other angles.  Despite being shot almost entirely on a soundstage, Wilder manages to bring an authentic Parisian flavor to the story by showcasing several diverse neighborhoods like the produce district and the meat market (which neatly echoes the nearby prostitution ring’s wholesale offering of flesh).  IRMA LA DOUCE’s technical presentation is further rounded out by Wilder’s regular editor Daniel Mandell and Andre Previn’s Oscar-winning, French-flavored score.

Wilder’s trademark misanthropic sense of humor and thematic fascinations are naturally brought out by the film’s source material, beginning with the director’s signature opening voiceover that introduces us to IRMA LA DOUCE’s Parisian setting and colorful social hierarchy.  As mentioned earlier, the film is Wilder’s most frankly sexual work to date, flirting wildly with women in various states of undress, plentiful double entendres, and the insitutional corruption on the law enforcement side that aids and abets their business.  The characters’ occupations drive their sense of identity, keeping in tradition with Wilder’s filmography.  Their actions are a function of their jobs, and are primarily geared towards that end: the prostitutes solicit sex, the cops overturn apartments in search of suspects… even the butchers rarely deviate from the business of dismantling livestock for consumption.  They never imaginea life for themselves outside of their line of work, except for maybe Mustache and his handy knack for possessing precisely the right skills for any given number of tasks.  Having been busted down from a proud cop to a sleazy pimp, Nestor is the only one who has no sense of identity at all.  He’s lost his moral anchor, and as a result, his actions to right his ship only compound his sinking.  Like his previous work, Wilder uses the visual language of uniform to convey this theme– the cops dress naturally dress alike, as do the butchers and the pimps.  Even Nestor’s impersonation of a British lord appropriates the starched airs of old money aristocracy into a kind of exaggerated uniform.  The use of Nestor’s aristocrat disguise also underscores the distinct class differences between the prostitutes and their customers, another one of Wider’s signature conceits.  He wrings several jokes out of the juxtaposition between a high-class blue blood and the low-rent social system of this particular Parisian red light district.

Unlike the disappointing failure of ONE, TWO, THREE, IRMA LA DOUCE bounced back as a sorely-needed hit for Wilder and his collaborators.  While the film posted big numbers at the box office, there were many who did not care for the film– including MacLaine herself, despite her resulting Best Actress nomination and a firm conviction in Wilder and Lemmon’s talents that made her believe reading the script beforehand was unnecessary.  Today, IRMA LA DOUCE is a fondly-regarded, yet minor, work in Wilder’s canon.  Beyond containing an uncredited cameo from a baby-faced James Caan as an American soldier glued to his portable radio, the film’s chief cinematic legacy lies in the expansion of acceptable sexual imagery and Wilder’s display of a broader, more-exaggerated comedic style.  The freewheeling 1960’s had finally arrived, and with it, a reinvigorated Wilder newly-liberated from the stuffy constraints of the Hays Code and Eisenhower-era sexual politics.