Some directors show a steady progression in confidence and craft as their careers unfold, while others lurch forward by leaps and bounds– surprising us with a burst of creativity we weren’t expecting.  In 19999, director David O. Russell proved himself to be an artist of the latter persuasion with the release of his ambitious and stylistically-radical action comedy, THREE KINGS.  There was very little, if anything at all, within Russell’s previous two films that signaled the sheer size of the artistic beast he contained within himself, and it all exploded out with such force that not even he could control its bloodlust.  The stress of mounting his first mainstream studio film at such a high level (a $42 million operating budget) proved a trial by fire for the young director, whose artistic brilliance was tempered by an outsized ego and combative hotheadedness that established his reputation throughout the industry as a “difficult” filmmaker.  This lethal combination had sunk other directors with far greater delusions of grandeur (see: Michael Cimino and the production debacle of HEAVEN’S GATE (1980)), but THREE KINGS somehow managed to be both an artistic and commercial success that dramatically boosted Russell’s rising profile.

THREE KINGS began as a script by John Ridley called SPOILS OF WAR, written in part as a challenge to himself to see how fast he could write and sell a screenplay.  Needless to say, challenge accomplished: Ridley churned out the script in a week and sold it to Warner Brothers only 18 days later (2).  After the success of 1996’s FLIRTING WITH DISASTER, producer Charles Roven brought Russell a collection of script loglines to consider for his next project.  The logline for SPOILS OF WAR leapt out to Russell, and he used it as a jumping off point for his own screenplay instead of actually reading (let alone using) any part of Ridley’s script (2).  The story, of which the begrudging Ridley would eventually get a credit for on the finished film, takes place immediately after the end of Operation Desert Storm in Kuwait.  Very much unlike the quagmire of Vietnam, victory was swift– on the order of days, almost hours.  Many soldiers found themselves in the desert unsure what to do with themselves– after all, could they really call themselves heroes if they never even fired their weapons?  Among these anxious soldiers is Troy Barlow, a rambunctious hothead who has just become a father.  Played by Mark Wahlberg in the first of what would be several collaborations with Russell, Troy is eager to get home, but is also desperate to find some sort of purpose in the conflict.  He finally finds it when he discovers what appears to be a treasure map stashed away between a prisoner’s ass cheeks.  He takes it to his superior, Chief Elgin (played to great effect by rapper-turned-actor Ice Cube), who realizes that it points to the location of a stash of gold bullion that Saddam Hussein hid away deep in the desert.  They decide to fake a “special” mission to go out and retrieve the gold under the auspices that they’re returning stolen property to the Kuwaiti people, but in order to sneak off the base they’ll need the help of the soon-to-be-retiring officer Archie Gates, played by George Clooney during the height of his “E.R.” heyday in a bid to establish himself as a true-blue movie star.  Clooney successfully parlays his smooth, unruffled physicality into that of a tired & disillusioned burn-out, a dynamic that no doubt was helped along by the fact that he was simultaneously shooting E.R. half the week during the shoot.

The so-called “Three Kings” set off into the desert to retrieve the gold, accompanied by Spike Jonze’s dim-witted redneck, Conrad Vig, as comic relief.  Jonze’s casting is notable in that he was (and still isn’t) an actor, per se; he was a director in his own right, and had recently come off the making of his own classic, BEING JOHN MALKOVICH (1999).  Jonze was a good friend of Russell’s out in New York, who wrote the role of Conrad specifically for him.  The four manage to find Saddam’s gold, but their attempts to extricate it are complicated by the refugees they’ve accidentally liberated from Iraqi rule in the process– a tricky situation considering that conflict operations are officially over.  Burdened by their consciences, the soldiers agree to transport their new charges (some played by actual Desert Storm refugees) across the border to safety.  Thus, the stage is set for a rousing action-adventure that combines chaotic comedy with timely relevance (especially in the context of George W. Bush’s re-entry into the region in 2003).  Aside from its trio of famous leads, THREE KINGS also features several prominent character actors from a variety of backgrounds.  Cliff Curtis gives a human face to the Kuwaiti refugees as their leader and a recent-widower, while a young Alia Shawkat of ARRESTED DEVELOPMENT fame plays his daughter.  Judy Greer– another future ARRESTED DEVELOPMENT cast member– plays the rival reporter to Nora Dunn’s all-business field reporter with a chip on her shoulder.  Comedian Jamie Kennedy grows out a wispy mustache for his role as a foolish soldier assigned to distract Dunn’s character from following Archie and his companions into the desert.  Finally, Holt McCallany plays a vindictive fellow soldier who pursues the “Kings” with a tactical, by-the-book zeal.

Of all the stylistic departures Russell makes from the naturalistic, low-key aesthetic of his first two features, the cinematography of THREE KINGS represents the most radical.  Working with cinematographer Newton Thomas Sigel, Russell boldly experiments with the outer limits of the 35mm film format to paint a depiction of war not as hell necessarily, but as hardcore rock and roll.  The searing high-contrast color scheme seen here is fairly commonplace today thanks to the advent of digital color-timing technology, but what makes THREE KINGS’ groundbreaking aesthetic so impressive is how it was achieved entirely through photochemical methods.  Large portions of the film were shot on Ektachrome transparency reversal stock, and then subsequently cross-processed in the lab onto negative stock– a process so volatile and highly-unreliable that many labs refused to insure their work (3).  The picture is further boosted by the use of the bleach-bypass process, which leaves the silver halides that would otherwise have been washed off the emulsion to produce an extra-grainy picture with cold, dense shadows and blown-out highlights.  Russell and Sigel render the 2.35:1 frame in sweeping swaths of desert and metal tones that oscillate from washed-out to hyper-vibrant on a shot-to-shot basis, infusing the film with a crackling visual energy that’s matched by a kinetic, Scorsese-style potpourri of camera techniques like whip-pans, zooms, freeze frames, slow-motion, slow shutter speeds, and handheld and steadicam shots that blend together into an expressionistic brew of hyper-real violence.  It should be noted that Russell’s depiction of violence in the film isn’t exactly gleeful– he takes great care to establish real consequences, tamping down the conventional sonic embellishment of movie gunfire while amping up the awareness of internal carnage (seen most potently when Russell’s camera dives inside the human body to explicitly demonstrate how much wreckage a single bullet can do to its guts).

THREE KINGS’ radical approach extends to other key elements of its execution, especially within the fields of production design and music.  The film was famously shot in the American Southwest, far from the war-ravaged sands of Kuwait.  Production designer Catherine Hardwicke (who, like Jonze, would later assert herself as a successful director in her own right) flawlessly recreates the distinct look of the Gulf, erecting ramshackle desert structures and adorning them with anti-Saddam graffiti.  Like the original scores that Russell commissioned for SPANKING THE MONKEY and FLIRTING WITH DISASTER, THREE KINGS employs a spare suite of percussive cues written by the Coen Brothers’ regular composer, Carter Burwell.  The score does unfortunately succumb to the cliched use of a sitar to convey a Middle Eastern setting, but what it lacks in originality it more than makes up for in the eclecticism of its bed of sourced tracks–a range of 70’s rock, 90’s hip-hop, U2, The Beach Boys, and classical music that reinforces the film’s bizarre juxtaposition of Western capitalist culture and Eastern antiquity.

Despite its stark tonal difference to Russell’s previous work, THREE KINGS deals in several of his established thematic conceits.  He continues to show a great ear for dialogue and character interaction, finding nuggets of brilliant comedy in even the darkest of scenarios.  This film is his third anchored by a male protagonist, but the females remain as dominant and strongly-realized as ever– one need look no further than Nora Dunn’s tough-as-nails, take-no-bullshit reporter, who senses what Archie and his band of brothers are up to and doggedly pursues them across the intimidating landscape.  THREE KINGS also asserts itself as the film to establish one of Russell’s less-favorable directorial conceits– his reputation as a temperamental and combative collaborator.  The extreme pressure of mounting a production magnitudes more expensive and complicated than his previous work seems to have brought out his worst tendencies, to the point that he got into a physical fistfight with Clooney over a disagreement about how to coax the right performance out of an extra (1).  His crew quickly grew tired of the outbursts and arguments that reportedly occurred on a regular basis, as well as the overlong shooting days that piled up as a result of Russell foregoing the efficiency of storyboards in favor of an improvisational style of shooting (1).  It’s the kind of behavior that no one likes to hear coming out of a shoot, especially for an art form that depends so heavily on collaboration.  Russell’s behavior may have been outlandish and uncalled for, but his stress is certainly understandable given that the studio was drastically slashing his budget and shooting schedule as a means to mitigate the risk of his hiring in the first place (4). 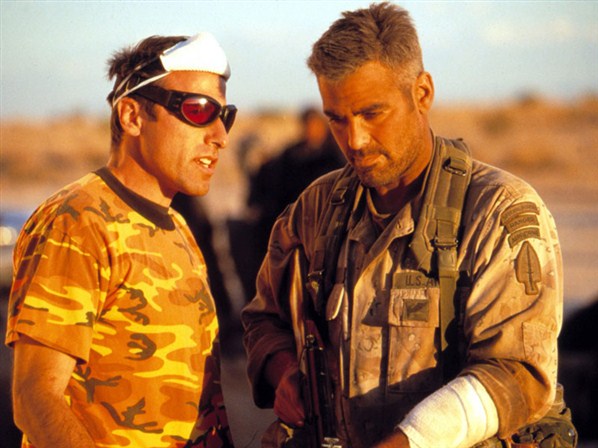 For all its near-legendary production woes, THREE KINGS ultimately triumphs as not just a rousing bit of big-budget entertainment, but also as an intriguing examination into the existential psyche of American soldiers during an unconventional conflict and a quantum leap forward for Russell’s own artistic development.  Having grossed over twice its budget, it was the first of Russell’s features to become a substantial hit at the box office, and critics were quick to welcome his mainstream breakout into the wider cultural conversation– even President Bill Clinton reportedly liked the film so much, he screened it for friends and staff at the White House (5).  Naturally, the film had its detractors too– the film was understandably banned in Saddam Hussein’s Iraq.  SPANKING THE MONKEY and FLIRTING WITH DISASTER may have established Russell as a gifted director with a unique insight into unconventional family dynamics and inspired dramaturgy, but THREE KINGS proved him to also be an ambitious stylist who was ready to become a prominent voice in the cinematic zeitgeist.