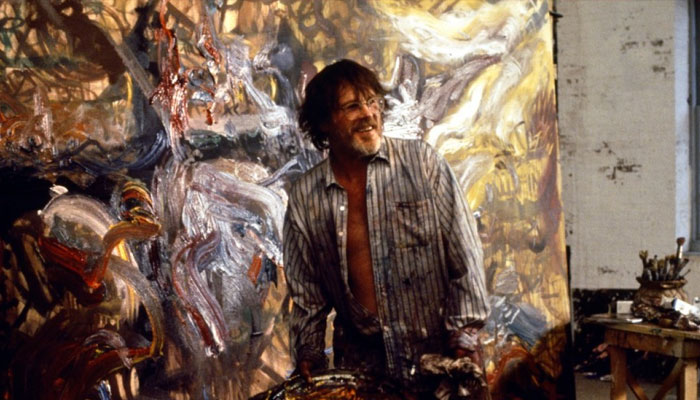 The Film Brat generation of filmmakers—directors of the Baby Boomer persuasion like Martin Scorsese, Francis Ford Coppola, George Lucas, and Steven Spielberg—can be credited for popularizing the idea of filmmaking in the context of a social community.  This could be credited due to their upbringing during the emergence of filmmaking as an area of academic collegiate study.  Their close personal friendships informed and influenced each other’s work, inspiring them to take risks with the assurance that their buddies would always have their backs.  This communal, collaborative mentality also encouraged them to join forces on projects beyond the scope of conventional narrative features.  One of these projects, 1989’s NEW YORK STORIES, was an anthology film comprised of three short works from directors with a reputation for New York-centric stories:  Francis Ford Coppola, Woody Allen, and Martin Scorsese.

Scorsese’s contribution, which opens the film, is called “LIFE LESSONS”, and follows the plight of a successful abstract paint caught in the throes of creative blockage in the wake of his lover/assistant threatening to leave him.  Written by Richard Price, the short features Nick Nolte as the aforementioned artist, Lionel Dobie.  Dobie is a revered, massively successful New York abstract painter who derives inspiration from the women in his life.  He’s got a big show coming up, but he can’t bring himself to create any work—he’s having a bit of a tussle with his live-in assistant, Paulette (Rosanna Arquette).  For a while, they had a mutually beneficial relationship—she had a place to work on her own art and a mentor who always had some helpful paternal advice about her life and career, while he had sex, comfort, and inspiration.  The trouble begins when Paulette returns from a trip home, only to reveal she didn’t actually go home—she went off on a sordid sexual affair with a young avant-garde comedian named Gregory Stark (Steve Buscemi), the kind of pretentious prick who hosts his shows in abandoned subway tunnels.  The affair didn’t end well, and Paulette has returned heartbroken and homesick.  She falls into a full-blown artistic crisis, but as her threats to give up and move out escalate, Dobie finds new creative inspiration in the turmoil—giving him the bold new work he needs for his big show and reaffirming his own creative talent.

Working with cinematographer Nestor Almendros for the first time, Scorsese gives “LIFE LESSONS” an unadorned, naturalistic look that’s complemented by an incredibly dynamic camera.  The advent of the Steadicam in the early 1980’s gave Scorsese an unprecedented freedom of movement.  He had always been inclined towards flashy, daring camerawork, but the Steadicam gave him an ease of movement that was simply impossible on a dolly or crane.  “LIFE LESSONS” also demonstrates the debut of a particular technique of Scorsese’s that I like to call the “scream-in”—a movement in which the camera rushes in on its subject (with the steadicam operator presumably running at full speed), going from a wide composition to a close-up in a deliriously forward motion.  While THE LAST TEMPTATION OF CHRIST (1988) had previously flirted with this technique, it’s in “LIFE LESSONS” that Scorsese fully incorporates the technique into his stable of visual tricks.  “LIFE LESSONS” also makes frequent use of an old-fashioned visual motif en vogue during the silent era: the iris shot, which is used to spotlight our attention on one specific detail of the frame by quite literally blacking out the rest of it.  Scorsese’s filmography is littered with casual nods and homages to notable artifacts of cinema history, so while the iris shot’s inclusion here might seem off-tone, it certainly keeps in line with Scorsese’s larger body of work.

The short anthology format, while constraining in run time, proves actually quite liberating for Scorsese, freeing him from the expectations that a studio would normally impose on him if it were a narrative feature.  The New York City setting conceit, while admittedly a recurring motif of Scorsese’s, is more so motivated by the larger ambitions of the project as a slice-of-life chronicle of The Big Apple.  “LIFE LESSONS” is sterling example of Scorsese’s penchant for rendering a gritty, naturalistic storyline in expressionistic, colorful ways.  Working with longtime editing partner Thelma Schoonmaker, Scorsese peppers “LIFE LESSONS” with signature tropes like the introduction of the blonde female lead in slow motion, or the heavy usage of rock music, blues, and Italian opera (with a particular focus on Procol Harem’s “Whiter Shade of Pale”).

By nature of being lumped into an anthology work with other filmmakers just as well known and revered as Scorsese is, “LIFE LESSONS” is an oft-overlooked gem within the director’s filmography.  The piece’s focus on characters grappling with their own self-doubt about art is emotionally gripping—there’s a quiet drama in denying one’s inner voice for freedom and expression in favor of taking on a “rational”, non-creative occupation.  Scorsese’s own experience in this regard makes “LIFE LESSONS” all the more potent—one could easily see Nolte’s creative frustration as a fictional stand-in for Scorsese’s own soul-searching as his career collapsed around him in the mid-80’s.  Fresh off the controversial accomplishment of THE LAST TEMPTATION OF CHRIST, Scorsese’s work on “LIFE LESSONS” serves as something of a palette cleanser and creative refresher that would lead directly into his next feature—a project that would come to be seen as a masterful capstone to his career and would enshrine his reputation as one of America’s foremost filmmakers.