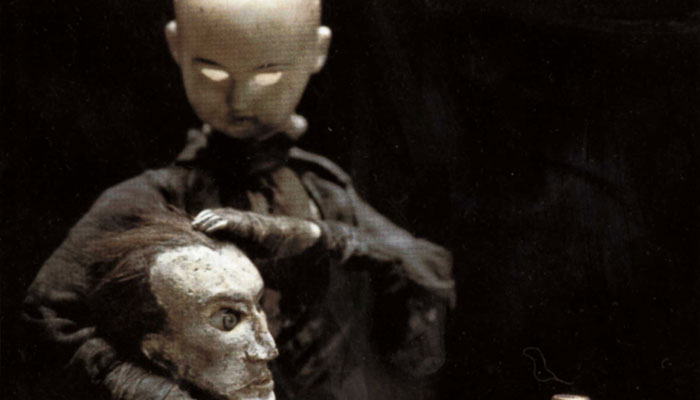 As a noted champion of practical effects and technical craftsmanship, director Christopher Nolan has a vested interest in supporting similarly-minded filmmakers.  As the director of some of the biggest blockbusters in recent memory, Nolan also has the power to shed light on underexposed voices by using the pedigree of his own name to help them find a new audience.  In 2015, Nolan did just for that the Quay brothers, two masters of imaginative puppet animation celebrated for their handcrafted gothic aesthetic that’s less Walt Disney and more David Lynch.

The 8-minute QUAY is Nolan’s first documentary effort, and the first short he’s made since 1997’s DOODLEBUG.  Working with co-producer Andy Thompson, Nolan acts as a one-man crew like he did on his feature debut FOLLOWING (1998), serving as director, producer, cinematographer, and editor as he documents the Quay brothers giving a tour of their cavernous shop and their myriad creations.  Ever true to his purist approach towards celluloid cinema, Nolan shoots QUAY on 35mm film in the 1:85:1 aspect ratio, conforming his high-contrast, desaturated earth-tone aesthetic to a handheld, observational tone.  Nolan is content to simply let the Quay brothers riff on the nature of their work without inserting himself into the conversation or imposing any sort of contrived narrative, ultimately creating an intimate portrait of two artisans and the lo-fi, handmade artistry behind their inimitable body of work.

QUAY screened at the Film Forum in New York before being made available on a boutique Blu Ray release collecting several of the brothers’ iconic shorts.  Nolan’s reverence and appreciation for the Quays is palpable; there’s no question he regards their work as a formative influence on his own approach to filmmaking.  Naturally, the Quays were renowned long before Nolan turned his lens on them and didn’t necessarily need a documentary like QUAY to expose their work to a wide audience, but the film does however reach a different audience– the kind whose diet consists only of mainstream Hollywood spectacles and isn’t particularly inclined to seek out the eccentric deep cuts of indie animation.  In showing us a key influence in his advocacy for practical effects in the face of digital wizardry, Nolan reveals a deeper insight into his own artistic character while suggesting the beginning of a more-intimate and experimental phase in his professional development.

QUAY is available in high definition on the The Quay Brothers Collected Short Films Blu Ray via Zeitgeist Films and Syncopy.