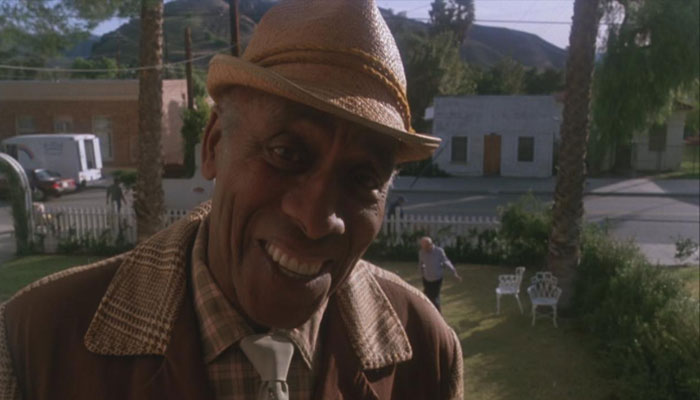 With the one-two punch of RAIDERS OF THE LOST ARK (1981) and E.T. THE EXTRA-TERRESTRIAL (1982), director Steven Spielberg was in a position to tackle any project he wanted.  His choice on a follow-up was a surprising one: contributing a segment to TWILIGHT ZONE: THE MOVIE (1983), an anthology feature that updated four of the seminal show’s most popular episodes— each one under the direction of a different filmmaker.  The film also boasts the work of fellow directors John Landis, Joe Dante and George Miller, with Spielberg and Landis serving as the producers shepherding the project to completion.

Spielberg’s segment, an adaptation of KICK THE CAN, occurs after Landis’ opening film, and tells the story of Sunnyvale retirement home, where the kindly old Mr. Bloom has arrived to stay.  After an interaction with his crabby houseguests, Mr. Bloom announces that he can help them recapture their past youth, and all they have to do is play kick the can with him at midnight.  He convinces the houseguests to join him, and sure enough, as they play they find themselves physically transformed back into children.  This soon causes a mix of emotions, with the joy of youth countered by the anxiety of having to grow up all over again.

Scatman Crothers anchors the film, who Spielberg no doubt cast after seeing his memorable performance in THE SHINING (1980), directed by his friend and mentor Stanley Kubrick.  Crothers’ performance as Mr. Bloom is pitch-perfect in conveying the necessary warmth and friendliness of the character, but it still comes off too much like the “magical Negro” stereotype most of the time.  It does help that Crothers is so damn charismatic—that dude could talk me into happily jumping off a bridge.

Cinematographer Allen Daviau returns, showcasing the same talent for nostalgic, golden-tinged images that gave E.T. THE EXTRA-TERRESTRIAL its magic.  Spielberg and Daviau adopt the 1.85:1 aspect ratio once again, and fill the frame with a warm color palette favoring brown and orange.  The camerawork, utilizing primarily classical dolly movements, is very reserved and makes for a conservative visual presentation (much like its subjects).

In terms of other key collaborators, producing partner Kathleen Kennedy and editor Michael Kamen also return, with the latter back after sitting out cutting duties on E.T. THE EXTRA-TERRESTRIAL.  KICK THE CAN is one of the only Spielberg films not scored by John Williams; instead, Jerry Goldsmith fills those shoes with a generic, romantic score.  The E.T. theme, this ain’t.

Due to its existence as a short film within a larger anthology feature, KICK THE CAN feels like an exercise in amusement on Spielberg’s part instead of genuine artistic expression.  In that regard, he shows no noticeable growth in his craft here—despite turning in top-quality work.  KICK THE CAN is integrated into the larger TWILIGHT ZONE: THE MOVIE narrative, and doesn’t blatantly announce itself as a Spielberg piece.  However, most would be able to easily tell based off Spielberg’s signature directorial style: the low angle compositions, the upbeat/optimistic tone, and even a moment where Crothers breaks the fourth wall (much like John Belushi did in 1941 (1979).  One curious aspect to Spielberg’s approach, however, is the openly Jewish comedy on display, which gives off a little insight into an area of Spielberg’s personality that he had previously omitted from his work.  While it’s a source for comedy here, it reads to me as Spielberg beginning to reckon with his Jewish heritage via artistic expression, which as we all know, would ultimately manifest itself in his de facto masterpiece, SCHINDLER’S LIST (1993).

Initially, Spielberg was going to adapt the arguably higher profile TWILIGHT ZONE episode “THE MONSTERS ARE DUE ON MAPLE STREET”, a factoid that caught my attention because it’s my own personal favorite TWILIGHT ZONE episode and I’ve wanted to make my own adaptation of it for several years now.  For whatever reason, Spielberg chose to film KICK THE CAN instead, which ultimately ended up as one of the weaker segments of the anthology feature.

TWILIGHT ZONE: THE MOVIE encountered middling success when it was released; it wasn’t a flop, but it wasn’t a hit either.  If anything, it only proved that anthology films aren’t a big draw for modern audiences.  The film is largely forgotten about today, eclipsed by the very television series it was trying to modernize.  If it’s remembered for anything, it’s the horrible tragedy that engulfed the film when actor Vic Morrow was killed by a helicopter crashing on top of him during the shooting of Landis’ segment.

Ultimately TWILIGHT ZONE: THE MOVIE is a nice callback to past forms of cinematic storytelling, but its legacy stands today as more of a curiosity than anything.