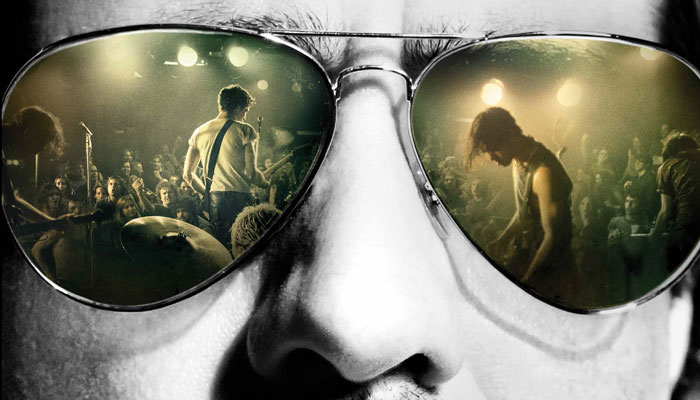 New York City in the 1970’s was a vastly different metropolis than the one we know today– a gritty, crime-riddled furnace of vice and decay.  Forever committed to our collective filmic memory via director Martin Scorsese’s classic noir, TAXI DRIVER (1976), this world also informed the gestation of the venerated filmmaker’s earlier 1973 breakout, MEAN STREETS.  Nearly fifty years on, post-Giuliani Manhattan is an international capitalist’s playground where foreign oligarchs go to store their fortunes in the form of obscenely-expensive high-rise condos.  For artists of all stripes, Manhattan has become a place where they commodify their art instead of create it.  In 2016, Scorsese would venture back to MEAN STREET’s seedy New York of 1973 with the pilot for VINYL, an HBO series developed by him in collaboration with his BOARDWALK EMPIRE partner Terence Winter, Rich Cohen, and The Rolling Stone’s Mick Jagger.  Envisioned as a rollicking portrait of his beloved city during a watershed moment in the music industry that saw the dawn of both punk rock and hip-hop, VINYL boasted a creative alchemy that must have seemed like a surefire hit at the time.  Scorsese, NYC, HBO, the 70’s, sex, drugs, rock ‘n’ roll… how could VINYL not be a monster success?  They didn’t count on their audience’s capability for indifference, however, and interest in the show quickly tapered off after Scorsese’s splashy feature-length premiere.  VINYL’s one and only season may be underwhelming, but Scorsese’s inaugural episode kicks off the series in style while leaving his audience with the kind of gleefully-dizzying contact high that only he can deliver.

It’s 1973 and rock ‘n’ roll is at the heights of success– excess and indulgence is everywhere, from the bands to the record executives.  Richie Finestra (Bobby Cannavale) is the hard-working, and even-harder-partying, owner of American Century Records, currently navigating the sale of his company to a conglomerate of shady German businessmen.  He’s full of the cocky Italian swagger we’ve come to expect from the prototypical Scorsese crime-film protagonist, but he’s also a product of runaway American upbringing– a coke-hoovering capitalist who shamelessly employs tricky accounting to ensure his company’s profits go to him and not to the artists who’ve made him rich in the first place.  He’s also got a sweet side, evidenced in the scenes where he travels back to the home he shares in Connecticut with his children and his loving (but decreasingly patient) wife, Devon (Olivia Wilde).  Scorsese’s pilot finds Richie navigating a crisis on multiple fronts: in addition to the sale of his company, he’s also looking for the next big thing.  He’s grown disgusted by the excess and interior decay of the music industry, embodied in figures like Led Zeppelin’s Robert Plant and Andrew Dice Clay’s boorish, Caligula-esque pig of a radio gatekeeper, Frank “Buck” Rogers.  A chance encounter with an old protege named Lester Grimes (Eto Essandoh) leaves him haunted by an earlier failure within the crushing jaws of the music industry machine— a personal, moral failure that quite literally ruined Lester’s life.

The pilot juxtaposes the sleazy decadence of 70’s rock ‘n’ roll with the ideological purity and raw, unleashed energy of the nascent punk movement.  The climax of the episode finds Richie reborn in the glow of a raucous underground concert that quite literally brings the house down.  His earlier mandate to employees to find The Next Big Thing helps open up the world of VINYL via its supporting characters, most notably with Juno Temple’s Jamie Vine, an assistant in the A&R department derided by her male colleagues as “the sandwich girl”.  She’s isn’t afraid to let her ethics get in the way of her ambition, evidenced by the veritable candy drawer of drugs she keeps at her desk so as to curry favor with her bosses.  With Richie’s blessing, she leads ACR’s charge into the world of punk by going after Kip Stevens, the rough-edged frontman of The Nasty Bitz (and played, interestingly enough, by Mick Jagger’s own son, James).  Scorsese’s two-hour pilot ducks and weaves through its various subplots at characteristically-breakneck speed, delivering all the satisfaction of a feature film with none of the resolution.  Obviously, that’s not a flaw in this situation– such a wild, indulgent and sprawling world deserves the same from its maiden episode.  Indeed, Scorsese succeeds in setting the table for the main course to come, filling the seats with compelling, out-of-the-box casting choices like Ray Romano as ACR’s neurotic head of promotion and Paul Ben-Victor as a brusque, unsentimental vestige of the music industry’s Old World.

Scorsese’s THE WOLF OF WALL STREET cinematographer Rodrigo Prieto returns to shoot VINYL, bucking the recent trend towards pristine digital photography in favor of 1.85:1 35mm film.  The high contrast, gritty texture of celluloid and saturated colors ably capture the griminess of NYC circa 1973, becoming a quite literal return to the “mean streets” of Scorsese’s formative years.  Indeed, a sequence in which Richie and his driver sail through Times Square and the rainy, nocturnal Manhattan landscape almost plays like a shot-for-shot recreation of TAXI DRIVER’s most atmospheric sequences.  Scorsese’s dynamic, high-energy style is immediately identifiable here, using a mix of kinetic steadicam, dolly, and crane shots in addition to rack zooms and whip pans.  When combined with Richie’s braggadocious, cocksure voiceover and a rollicking jukebox soundtrack that ducks and weaves through the pilot’s duration, this results in an exhilarating and unique fusion of sound and image that recalls the very best of the director’s crime epics.  Still more of Scorsese’s stylistic signatures make their routine appearance in VINYL: jump-cuts, punch-ins, split-focus diopter compositions, and even the usage of extreme slow-motion during the book ending warehouse concert sequence.  All told, VINYL’s technical presentation slips quite effortlessly into Scorsese’s larger filmography, reinforcing the consistency of his particular visual grammar.

From a thematic standpoint, VINYL is also vintage Scorsese– from its NY setting, to the rampant substance abuse, and even to the wise-guy businessmen who employ blunt force and gangster intimidation in their dealings.  Like most of the director’s previous work, VINYL possesses a strain of unpredictable tension that usually erupts into chaotic and messy violence (seen best in the sequence where Richie visits “Buck” Rogers’ opulent Long Island home at the end of a two-day bender).  Cultural history, particularly of the musical and cinematic variety, continues to play a substantial role in Scorsese’s artistic identity.  The aforementioned “Buck” Rogers home-visit sequence throws a nod towards film history by projecting James Whale’s horror classic FRANKENSTEIN (1931) onto a large screen in Buck’s foyer/living room.  The show as a whole honors the history of twentieth-century American music, narratively tracking how blues became rock ‘n’ roll, and how rock further transmogrified and branched out into punk and hip-hop.  Scorsese’s appreciation for the history of rhythm & blues is particularly evident, with VINYL incorporating several interstitial vignettes that artfully showcase various musicians as they perform seminal genre hits.

As exciting and as artfully made as it is, the pilot for VINYL doesn’t necessarily break any new ground in Scorsese’s artistic development.  Marking his return to television since he shot the pilot for BOARDWALK EMPIRE in 2010, VINYL was a project that Scorsese no doubt felt particularly enthusiastic about; indeed, he hoped to shoot further episodes in future seasons (1).  Unfortunately, it wasn’t meant to be.  Interest in the show dive-bombed after the premiere of Scorsese’s pilot, and the series’ co-creator and showrunner, Terence Winter, left the show over creative differences towards the end of the first season (2)(3).  Steven Soderbergh’s frequent writing collaborator, Scott Z. Burns, was hired to take the reigns for Season 2, only for HBO to ultimately cancel the show a few months after making the initial renewal decision (4).  Resting somewhere in the middle ground between success and failure, VINYL nevertheless serves as a visceral portrait of a bygone era, and something of a prologue to the contemporary music industry’s peculiar quirks.  Scorsese’s pilot, which garnered generally positive reviews from critics, sets the world of the show up in impeccable fashion.  More importantly, it serves as further evidence that, after nearly half a century of filmmaking, Scorsese still serves as a vital force in the contemporary cultural landscape.

VINYL: “PILOT” is currently available as a high definition stream via HBO.