As he rapidly approached his sixtieth birthday, director Ridley Scott found himself the subject of attention usually reserved for the occasion of one’s imminent retirement.  For instance, 1995 would see Scott and his brother, Tony, receive the equivalent of a lifetime achievement award in the form of a BAFTA for their Outstanding British Contribution to Cinema.  However, judging by Scott’s professional moves during this period, it becomes clear that retirement was the absolute last thing on the seasoned director’s agenda. That same year, he not only served as the head of a consortium that purchased Shepperton Studios, he also reorganized the production company he shared with Tony to better facilitate their shared vision for the future.  Originally founded in 1970 as Scott Free Enterprises, the name later changed to Percy Main in 1980, in honor of the English village where their father grew up. 1995 would see the company reach its current incarnation: Scott Free Productions. This version of the company would oversee some of Scott’s biggest hits, ultimately growing to become a powerhouse in the industry (and on a personal note, the site of a job interview I had in 2011 to be the assistant to a high-ranking executive).  The first project under this reinvigorated banner was understandably very important— it needed to set the tone for all the subsequent projects that followed. 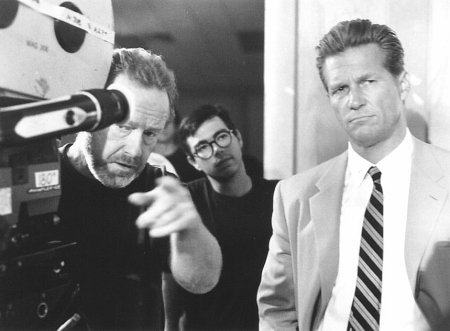 As fate would have it, that first project would take on the form of WHITE SQUALL (1996)— an adventure film based off Charles Gieg Jr. and Felix Sutton’s 1962 novel, “The “Last Voyage Of The Albatross”.  As adapted by screenwriter Todd Robinson, WHITE SQUALL imbues the time-honored coming-of-age story with life-or-death stakes, finding a group of teenage boys sailing the Atlantic seaboard on the Albatross, a 1920 schooner that sank on May 2nd, 1961 during an intense storm that its captain claimed was a mythic “white squall”.  The story is told from the point of view of Chuck Gieg, played by actor Scott Wolf as a real straight arrow. Gieg is a young man from Mystic, CT, who signs up to join the Albatross as part of its college preparatory program— a kind of “semester at sea” where he’ll learn the in’s and out’s of sailing while studying for his entrance exams.  Throughout his subsequent adventures, he forms a tight-knit bond with the other boys on the crew and comes into his own as a man, culminating in a violent storm and an awful tragedy that will change his life forever. Wolf’s performance is something of a blank template— the story is not so much his to tell as it is the collective crew’s, so he often cedes the spotlight in order to let his shipmates shine.  Jeff Bridges anchors WHITE SQUALL as Sheldon, the captain of the Albatross, projecting a stern warmth that makes it easy to see why the boys would come to lionize and revere him.  Caroline Goodall plays the ship surgeon and Sheldon’s wife, Dr. Alice Sheldon, the sole woman on the ship. When it comes to the antics of teenage boyhood, she’s seen it all, and has subsequently honed a seasoned, maternal skillset without compromising her authority.  The film deftly balances these characters with the others onboard the Albatross, with some getting more of a chance to shine than others— John Savage’s eccentric English teacher, or Ryan Philippe’s timid, baby-faced student, for instance. WHITE SQUALL also boasts the talents of the late character actor James Rebhorn, who makes a brief appearance here as a Coast Guard officer during the climactic trial sequence, as well as Balthazar Getty, who is notable not so much for his performance here as he is for his lineage as the son of John Paul Getty III— the subject of Scott’s 2017 film, ALL THE MONEY IN THE WORLD.  Scott spends a great deal of screen time developing the relationships at the core of the story, allowing us to witness key episodes in the boys’ passage into manhood, all while building towards the inevitable storm foretold in the film’s very title.

WHITE SQUALL is executed with the characteristic technical pedigree that we’ve come to expect from a Scott film, leaning into his confident, expressive style to deliver a memorable picture on all fronts.  With the exception of returning producer Mimi Polk Gatlin, Scott works with fresh department heads all around, resulting in a reinvigorated, polished aesthetic that feels contemporary and cutting-edge despite its 1960’s period setting.  Having been shot in various places around the Caribbean as well as a horizon tank in Malta (1), the film as a whole projects an exotic, swashbuckling aura not unlike his previous sailing adventure, 1492: CONQUEST OF PARADISE (1992).  Cinematographer Hugh Johnson ably imprints the golden veneer of nostalgia onto the 2.35:1 35mm frame, complementing Scott’s trademark blend of atmospheric, high-contrast lighting effects, silhouettes, smoke, gradient skies and impressionistic slow-motion flourishes.  The use of billowing curtains and the slat-lighting of Venetian blinds is another trademark of Scott’s aesthetic (as well as brother Tony’s), and his incorporation of said compositional devices imbue WHITE SQUALL with a majestic flair— the Venetian blinds adding stateliness to the court sequence, and the billowing curtains swapped out for flapping sails that catch the wind on open water.  Scott’s classical camerawork complements this epic-sized approach, using canted angles to exaggerate the unsteady sensation of being on a rocking ship as it threads gigantic waves.  The production design team of Peter J. Hampton and Leslie Tompkins create an authentic, subdued period look while facilitating Scott’s signature talent for conveying an immersive environment.  Indeed, WHITE SQUALL is at its most vibrant when the crew of the Albatross decamps to busy island ports filled with the local culture— one can practically taste the complex flavors of a given regional palette.  Scott initially intended for celebrated French composer Maurice Jarre to score WHITE SQUALL, before turning to previous collaborator Hans Zimmer for another round.  When Zimmer ran into scheduling difficulties, he brought Scott’s attention to his protege, Jeff Rona.  Rona would ultimately receive WHITE SQUALL’s music credit, combining orchestral elements like strings and woodwinds with some synth instrumentation to create an ethereal, romantic mood that complements Scott’s nostalgia-steeped mix of doo-wop jukebox needledrops from the period.

As the first production from the modern-day incarnation of Scott Free, WHITE SQUALL is an important film in Scott’s canon.  Mixed reviews no doubt contributed to the film’s lackluster box office performance, further contributing to the decline of Scott’s commercial profile within the industry since the high of THELMA & LOUISE five years earlier.  That said, WHITE SQUALL has aged beautifully in the twenty-plus years since, taking on a timeless glow even as some of its aesthetic choices point to the time of its making.  A modest wave of appreciation has buoyed WHITE SQUALL since its release, elevating it as a minor classic in Scott’s filmography.  Its influence hasn’t spread much further than the concentrated circle of Scott die-hards, but those who have discovered it are able to see WHITE SQUALL for what it is: a sweeping coming-of-age epic that stands as one of the most solidly-constructed entries in its genre, as well as a display of an inspired filmmaker on the upswing towards ever-higher peaks in his career.