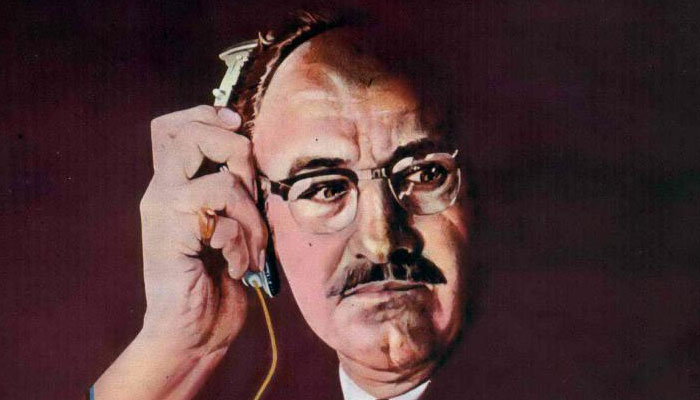 Inducted into the National Film Registry: 1995

I have a strange, contentious relationship to director Francis Ford Coppola’s feature film THE CONVERSATION (1974).  It is widely regarded amongst film circles as a masterpiece in its own right, and I tend to agree.  However, there’s something intangible that I find alienating on a personal level.  I don’t know what it is, so I can’t really explain it.  I had the same reaction the first time I saw the film in college– that of a deep, yet cold respect that left little in the way of actually loving it.  I was hoping that this might change upon revisiting the film, but I can’t really say that it has.

After the Best Picture win for 1972’s THE GODFATHER, Coppola was awash in acclaim and could choose any project he wanted.  Despite the calls to go right into production on a sequel to THE GODFATHER, Coppola chose instead to shoot a small, personal project as a palette cleanser.  This arguably began the trend of successful directors leveraging a blockbuster’s warm reception into making a passion project of their own design (a trend continued most recently by Christopher Nolan when he made 2010’s INCEPTION between the two final chapters of his DARK KNIGHT TRILOGY).

THE CONVERSATION concerns a private investigator named Harry Caul (Gene Hackman) who specializes in audio surveillance.  He and a team of associates have been contracted to record a clandestine conversation between two seemingly-innocuous pedestrians in a crowded San Francisco park.  As Caul refines and mixes his recordings in his warehouse studio, the nature of the conversation reveals itself to be of murderous intent.  Thinking he might be indirectly enabling a horrible crime to occur, Caul descends into an abyss of paranoia and mystery, convinced that he has become a target of surveillance himself.

The film was released just as the Watergate scandal broke, which made the story feel extremely relevant. The performances, which tapped into a fundamental distrust of authority figures, are striking without being over-the-top.  As Caul, Gene Hackman eschewed his leading-man good looks by donning ill-fitting glasses and an unflattering plastic jacket that looks not unlike a placenta.  However, he injects a paranoid pathos that is utterly compelling, taking us along for the ride as he descends into madness.  Caul might be one of the more intriguing protagonists in recent memory:  his career consists of recording unsuspecting targets, but he has developed an extreme case of paranoia about his own privacy– even going so far as to tear up his entire apartment when he suspects it’s been bugged.

Coppola also enlists the help of GODFATHER alumnus John Cazale, who plays Stan, Caul’s bookish surveillance assistant.  Out of the six films in which Cazale appeared during his lifetime, this is probably his smallest role, while also being his least neurotic/eccentric.  Despite the limited screen time, Cazale brings a highly memorable presence to the film.  It really is a shame that we lost Cazale so early, as he might have been one of cinema’s most treasured character actors.

Rounding out the cast is Allen Garfield, Cindy Williams, Harrison Ford, and recurring Coppola collaborator Robert Duvall.  Garfield plays Bernie Moran, a sound surveillance expert from New York and a friendly rival of Caul’s.  Williams plays Ann, the anxious, vulnerable woman at the center of Caul’s surveillance.  Ford, who was introduced to Coppola via George Lucas’ AMERICAN GRAFFITI (1973), plays Martin Stelt, a well-dressed businessman who stalks Caul in pursuit of his recordings.  It’s interesting to watch Ford in his pre-Han Solo days, as his developing talents are very noticeable.  He’s not particularly good in THE CONVERSATION, but you can tell the potential is there.  Meanwhile, Duvall appears in somewhat of a glorified cameo as the mystery man who commissions Haul to record the targets, only to find himself a victim of his own suspicions.

THE CONVERSATION has a much more even look compared to the amber-soaked visuals of THE GODFATHER.  Originally lensed by director of photography Haskell Wexler, Wexler proved to be combative with Coppola and was replaced by Bill Butler, Coppola’s DP from THE RAIN PEOPLE (1969).  The 1.85:1 35mm film frame is appropriately gritty and seedy, dealing in a bland color palette of grays and neutrals.  This color scheme is further reflected by Dean Tavoularis’ production design, which features cold, brutalist architecture at odds with its picturesque San Francisco setting.  Perhaps this is why I feel so alienated by the film– a great deal of the film’s story takes places in cold, imposing locales that blot out clarity and logic.  While opting for a relatively realistic presentation, Coppola does include an impressionistic dream sequence rendered in a cobalt blue through a thick layer of smoke.

Despite the unassuming visual presentation, Coppola makes artful use of his camerawork in a way that reinforces the story’s central themes.  A recurring visual motif is “machinery in motion”, most notably seen in the whirring gears of Caul’s audio equipment.  Telephoto lenses prove to be a boon to Coppola’s aesthetic, giving the film’s surveillance sequences a verite feel that’s highly effective.  The opening shot (a slow zoom-in from a bird’s-eye perspective that finds a single conversation amongst a crowd of people) is one of the most famous of its kind, praised for its virtuoso sound editing by legendary cutter Walter Murch.  The camera movements are mostly restricted to the functional movement of actual surveillance cameras (the ending shot that pans back and forth is the clearest example).  This is an inspired move from Coppola, and yet another example of how he has redefined the visual language of cinema throughout his career to better tell his stories.

THE CONVERSATION utilizes the jazzy piano work of David Shire for its score, which combines the sounds of swing and ragtime music with minor keys that suggest intrigue and mystery with sinister underpinnings.  While it may seem odd for such a low-key, paranoid film, the sound reflects Caul’s own musical inclinations– he’s seen throughout the film playing his saxophone along to jazz records when he’s alone in his apartment.

For the entirety of the 1970’s, Coppola found himself on a directing hot streak in which he could do no wrong.  THE CONVERSATION falls somewhere in the middle of this streak, and sees Coppola embracing the low-key aesthetics of his independent roots while applying them to the trappings of a big-budget genre picture.  Coppola looked to his filmmaking peers abroad for inspiration when crafting the film, a practice that would come to define the film school-bred directors of his generation.  His chief influence was Michelangelo Antonioni’s Italian hit, BLOW-UP (1966), which featured a similar plot of using recordings (photographs in Antonioni’s film) to uncover a murderous conspiracy.    It could also be argued that Akira Kurosawa’s RASHOMON (1950) was another big inspiration to Coppola, with its multilayered narrative featuring different interpretations of a single event.  These European sensibilities lend at once both a worldliness as well as a bracing sense of innovation to what was somewhat of a stale period of American filmmaking.

THE CONVERSATION went on to snag the Palme d’Or at the Cannes Film Festival, and has since joined the National Film Registry at the Library of Congress, thereby stitching itself into the very fabric of American culture.  Coppola himself has stated that THE CONVERSATION is his favorite film of his own, owing to the very personal nature of the story.  For Coppola’s production studio, American Zoetrope, the film’s success was a validation of everything he had set out to do with its creation.

By tackling a smaller, radically different film after the success of THE GODFATHER, Coppola bought time to creatively refresh himself before embarking on production of THE GODFATHER PART II that very same year.  THE CONVERSATION has aged remarkably well since its release, becoming a classic in its own right.  While I still found myself inexplicably put-off by its subdued charm, I can’t deny the film’s sheer excellence that has contributed to its longevity.  THE CONVERSATION still has many secrets to tell us… all we have to do is listen.

THE CONVERSATION is currently available on high definition Blu Ray from Lionsgate.