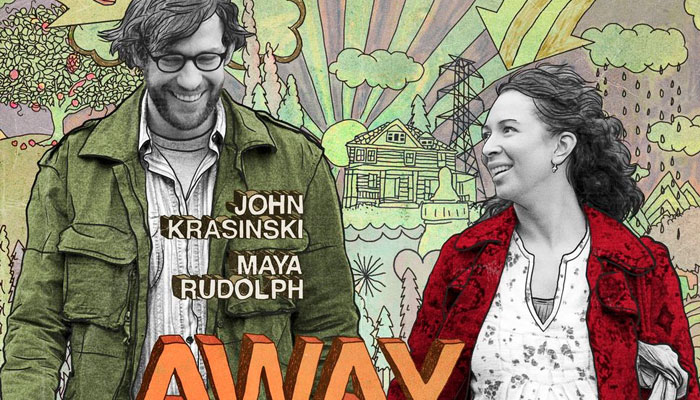 Following the harrowing chamber drama of 2008’s REVOLUTIONARY ROAD, it’s understandable that director Sam Mendes would want to tackle something a little bit more light-hearted.  In his quickest turnaround of a project to date, Mendes returned to screens just a year later with AWAY WE GO, a heartfelt comedy about the search for a place called home.

Bert (John Krasinksi) and Verona (Maya Rudolph), are an unmarried couple expecting their first child.  When Bert’s parents announce their intent to move to Belgium before the baby is due, the young couple decide to move somewhere else and start a new life of their own making.  The question is, however, where will they go?  Together, they embark on a cross-country tour and reconnect with old friends and family in an attempt to find that most elusive place of all: home.

As Mendes’ first outright comedy, the performances by nature aren’t going to be stuffed with gravitas and importance, but that doesn’t mean they’re any less good.  Given the chance to let his hair down, Mendes reveals an ability to create touching, comic moments of fleeting beauty.  In his first substantial feature film role outside of TV’s THE OFFICE, the bearded Krasinski draws from his playful public image but downplays any hint of cynicism or snark.  Despite the seeming wealth of his parents, he appears to be scraping by financially.  He lives in a broken-down, uninsulated dwelling in the woods that’s prone to frequent electrical failure.  He ekes out his humble existence with Verona, played by SNL’s Maya Rudolph in what’s also her first big film role.  Verona is feisty, independent, and fiercely loyal.  The path to parenthood carries extra emotional weight for her, due to both her parents dying when she was in college.  Together, their chemistry is subtle, natural, and incredibly relatable.  Mendes does a great job creating a relationship dynamic that feels tangible.  Without it, the entire film could fall apart.

Like Homer’s The Odyssey, the film is comprised of a series of encounters between a variety of eccentric characters, played by an eclectic supporting cast.  Most have only one scene or sequence to carry, but each one is memorable and helps inform Bert and Verona’s development.  A bearded Jeff Daniels (perfect casting, by the way) and Catherine O’Hara play Bert’s parents in such a way that it’s entirely conceivable that a man like Bert would be their son.  Daniels and O’Hara have a tough job, as they could potentially come off as supremely selfish in their decision to abandon Bert in his time of need to go fulfill some lifelong fantasy of living abroad, but they bring so much charm and warmth to their performances that it’s impossible not to like them.

It’s unclear where the film takes place at the start, but it suggests a cold, winter-y Northeastern setting.  Through their travels, Bert and Verona encounter a wide variety of locales, each one rendered in quirky detail.  Commendably, the screenplay doesn’t have them going on a whirlwind tour of famous American cities and landmarks.  Rather, the story sheds some light on locales both mundane (Tucson, Phoenix, and Madison) and glamorous (Montreal and Miami).  Each location has an emotional significance for either Bert or Verona, as each place has a member of extended family or friend living there.  In Tucson, Lily (Allison Janney) and Lowell (a hilariously droll Jim Gaffigan) exhibit a trashy lifestyle that reminds Verona that sometimes past friends stay in the past for a reason.  In Phoenix, Verona reconnects with her younger sister Grace (Carmen Ejogo) and finds herself confronting the painful memory of her parents’ passing.  In Madison, Maggie Gylenhaal steals the show as Bert’s cousin LN, a new-age hippie that rejects most contemporary notions of child-rearing, lifestyle, and hygiene.  Montreal finds college friends Tom (Chris Messina) and Munch (Melanie Lynskey) living a seemingly-happy and drama-free life, but secretly grappling with the pain of being unable to conceive a child of their own.  Finally, Paul Schneider takes charge of the Miami segment as Bert’s brother, Courtney, who’s trying to keep his family together as it falls apart around him.  All of these characters have an effect on Bert and Verona’s journey, and ultimately moves them to decide where they will put down roots.

As a rule, comedies don’t require much in the way of a dynamic visual style.  Mendes adheres to that mentality for the most part, but he still finds ample opportunity to inject his personal aesthetic and give the film a distinctive look.  Working for the first time with Director of Photography Ellen Kuras, Mendes creates an Anamorphic image with a middling contrast whose blacks fall off into the blue/green spectrum, and whose colors are naturally saturated.

Kuras and Mendes create a subtle, distinctive look for each locale.  For instance, Phoenix and Tucson are rendered in heavy orange tones, Madison in lush greens, and Montreal in crisp reds and yellows.  Framing follows the typical Mendes mandate of wide, artfully composed shots achieved through the use of a tripod or dolly.  Mendes’ classical, formalist inclinations work well for the tone he’s established, and help keep the focus on the performances.  My only qualm with the look is more of a personal pet peeve than anything.  Sometimes, the tone is a little too twee or precious at times for my liking.  However, it never threatens the integrity of the story, so it’s really just a minor quibble.

Interestingly enough, just as he had foregone the use of regular cinematographer Roger Deakins in favor of Kuras, Mendes foregoes the use of regular composer Thomas Newman in favor of a score sourced from Alexi Murdoch songs.  A popular musician in his own right, Murdoch repurposes his quiet, moody folk songs to fit the film’s emotional development.  The use of his hit “All Of My Days” recurs throughout the film as an unofficial theme song.  In his break from regular collaborators, it becomes apparent that AWAY WE GO served as a kind of artistic refreshing for Mendes.  It may turn off fans who have come to see those relationships as part of a stylistic whole, but it’s good to incorporate new ideas and points of view every once in a while.

The story has some very potent themes, the biggest of which is the search for home.  It’s important to make the distinction between a house and a home.  A house is a structure, with four walls and a roof.  A home is a place with special significance, a little slice of land that you raise your family on.  Early adulthood is a complex emotional state, as most people that age are essentially homeless.  By that, I don’t mean they’re literally living on the streets.  But, since they have yet to settle down and raise a family of their own, they haven’t established a place of their own to call “home”.  AWAY WE GO takes this search for home and adapts it into the form of a road trip comedy.  The film’s main message is that there’s many places one can live, but there is truly only place that can be home.  In a nice touch, when Bert and Verona finally do find home at the end of the film, the actual geographic location is very deliberately not revealed.

In the course of Mendes’ development as a filmmaker, the film is somewhat of a curiosity.  It’s an independent film by a decidedly commercial filmmaker with classical tendencies.  It’s a much smaller film in a canon whose earlier films had previously been only getting bigger.  It’s the one comedy in a filmography of brooding dramas.  But, like I said before, AWAY WE GO finds Mendes at a point in his career where perhaps a creative refreshening seemed necessary.  The fact that he’s stretching outside of his comfort zone and voluntarily working with less resources than he’s accustomed to will only lead to growth and further mastery of his craft.  AWAY WE GO certainly isn’t Mendes’ best film, nor do I suspect that it’s a truly great film, but it’s definitely an underrated film that’s still relevant and touching nearly four years later.

AWAY WE GO is currently available on high definition Blu Ray from Universal.