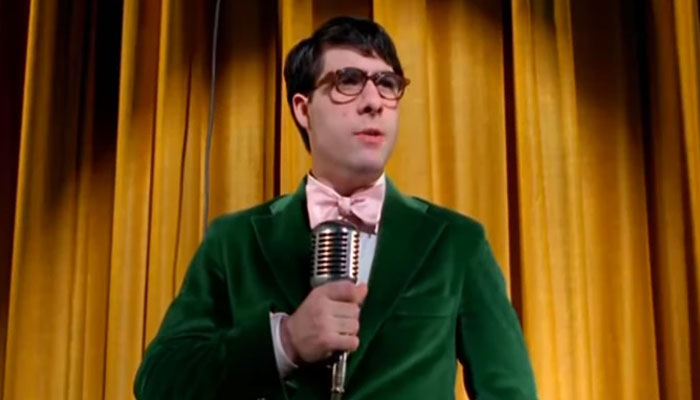 After the breakout success of 1998’s RUSHMORE, its eccentric characters, charming storyline, and hotshot young director earned a prominent place within the cultural conversation about that year’s notable films.  As a smaller film, it stood the risk of being overlooked in favor of larger, more popular films like OUT OF SIGHT, ARMAGEDDON, or THE TRUMAN SHOW.  While these films didn’t quite fit into the archetypical awards show mold, their popularity earned them recognition at the MTV Movie Awards.  In a move that exhibited genuine inspiration and foresight, the committee chose to also recognize the upstart appreciation surrounding RUSHMORE as one of the year’s best films by incorporating the film’s singularly eccentric style into the on-air promotions leading up to the awards.

The central idea, called THE MAX FISCHER PLAYERS PRESENT THE MTV AWARDS, utilized RUSHMORE’s recurring subplot that saw Jason Schwartzman’s Max Fischer mount endearingly elaborate stage productions of popular films like SERPICO.  Wes Anderson was enlisted to reunite with Schwartzman and the rest of his RUSHMORE cast in creating a series of short spots that saw Max Fischer and company creating stage adaptations of OUT OF SIGHT, THE TRUMAN SHOW, and ARMAGEDDON.  The square 4:3 aspect ratio of the television format echoes the boxy constraints of a live stage, as does Anderson’s camera movements that flatten depth while moving in only two dimensions.  The lighting, sets, and special effects all possess the same janky, handmade quality that made their incorporation in RUSHMORE so charming.  The various tricks and props that Max and company use to evoke the big-budget look of these three films is endlessly inventive, foreshadowing and anticipating the mild fan phenomenon of “sweding” Hollywood films that was popularized by Michel Gondry’s sleeper hit BE KIND, REWIND (2008).

Anderson effortlessly recreates RUSHMORE’s iconic tone and style, right down to the whip-fast comedic timing and innocently acerbic wit.  His films often possess a diorama-esque or proscenium-like affectation to their aesthetic, as if his stories were self-aware and unfolded under the encapsulation of air quotes, and MAX FISCHER PLAYERS PRESENTS THE MTV MOVIE AWARDS is perhaps one of the most literal manifestations of that conceit.  All in all, the spots were highly effective in promoting 1999’s Movie Awards for MTV, but they were even more effective for introducing Anderson’s unique voice to culture-literate teens and young adults: the audience that would champion Anderson to even greater heights as he built his body of work.

THE MAX FISCHER PLAYERS PRESENT THE MTV MOVIE AWARDS is currently available via the supplemental features found in the RUSHMORE Criterion Collection DVD.