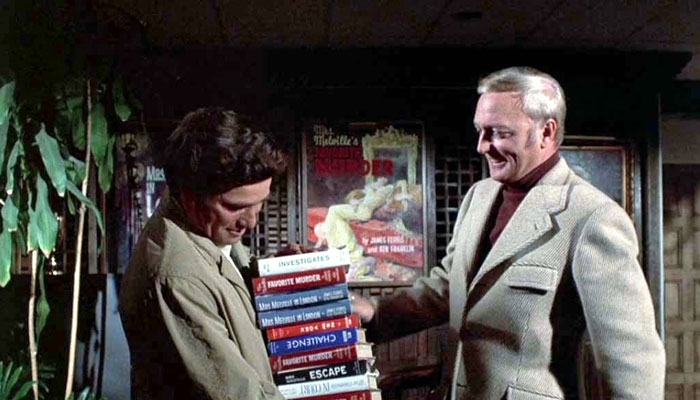 The year 1971 was a fateful one for director Steven Spielberg.  The young hotshot had already racked up some impressive credits on ROD SERLING’S NIGHT GALLERY and MARCUS WELBY, MD in the years prior, but 1971 in particular saw the production of no less than 6 television projects—one of which became his break-out into features.

First up is THE NAME OF THE GAME, a series that was well into its third season when Spielberg came onboard to direct an episode titled “LA 2017”.  The show revolved around the magazine industry and was set in the present day, but “LA 2017” used the “it was all a dream” conceit as an excuse to transport the show’s main character (Gene Barry) into a future version of Los Angeles.  Why they did this, I haven’t the slightest clue.

Anyways, the series appears to be unavailable on DVD, and the only version of the episode that exists online is a short fan-made trailer featuring scenes from the episode.  Going off that, it’s quite apparent how much of a deviation it is from Spielberg’s previous television work.  As his first project with a feature-length running time, Spielberg uses imaginative, slightly kitschy production design to create a dystopian Los Angeles of the future.  Based off the trailer, it seems to be populated by geriatric hippies who perform in underground rock clubs.  This makes a strange kind of sense, given the fact that most of pop culture’s predictions about the future are really just projections of the present times they’re made in.

As the father of the modern blockbuster, Spielberg’s career has understandably been heavily associated with visual effects. “LA 2017” marks the young director’s first professional use of visual effects, as well as his first professional dabble in the sci-fi genre.  Judging by the glimpses given in the trailer, Spielberg’s visual style at this time seems to be coalescing around evocative low-angles and compelling close-ups, with camerawork reminiscent of—and no doubt influenced by—the French New Wave movement that was then-unfolding across the pond.

After the successful reception of “LA 2017”, Spielberg contributed two episodes to the unsuccessful television show THE PSYCHIATRIST.  His episodes, “THE PRIVATE WORLD OF MARTIN DALTON” and “PAR FOR THE COURSE”, were unavailable for viewing, as is the entire series.

Later that year, Spielberg landed a plumb job in directing the series premiere of COLUMBO, a property that had already enjoyed a few successful TV movie incarnations.  Featuring well-known film actor Peter Falk as the titular detective, COLUMBO bucked the trend of most television serials at the time by regularly crafting movie-length episodes.  Each COLUMBO episode was self-contained, further leading to its cinematic nature.

Spielberg’s episode, titled “MURDER BY THE BOOK”, featured a “perfect crime” mystery, wherein Columbo cracks the case of a brilliantly covered-up murder.  Jim Ferris (Martin Milner) is one half of a writing team behind a successful series of murder mystery books, but in reality he is the one that does all of the writing.  His partner, Ken (Jack Cassidy) enjoys all of the benefits of the series’ success without actually contributing anything.   This poses a problem when Jim decides to go solo, which would dry up all of Ken’s income.  Naturally, Ken kills Jim and covers it up using a ruse from one of their stories.

Once the murder is discovered, Columbo gets on the case, immediately setting his sights on Ken as a suspect and unraveling his so-called “perfect plan” quite easily.  Ken was so confident in getting away with murder, he neglected to mind that his meticulous plan was laid right out in the open—inside Jim’s own books—for Columbo to find.

Despite being a series premiere, Spielberg still adheres to the aesthetic established in previous COLUMBO TV movies by going with a naturalistic, high contrast look.  Dolly and crane-based camera movements give the episode a high degree of production value, while Spielberg’s use of a handheld, documentary aesthetic in the crime-scene sequence further points to his fascination with the French New Wave.

One of the great things about watching old TV shows and movies shot in Los Angeles is recognizing certain landmarks and how their surroundings looked at the time of production.  I remember seeing an aerial shot of downtown LA in Michelangelo Antonioni’s ZABRISKIE POINT (9170) and being blown away by how non-existent today’s skyline was back then.  Similarly, I recognized the locale of an early scene in “MURDER BY THE BOOK”, which featured a building on Sunset Boulevard that I came to know very well after working inside of it for two years.  However, in COLUMBO this building was still under construction, having only reached the steel frame stage.  It has no real bearing on my analysis of Spielberg’s work here, but I couldn’t resist mentioning it.

Spielberg would go on to direct an episode for the series OWEN MARSHALL: COUNSELOR AT LAWcalled “EULOGY FOR A WIDE RECEIVER”.  This too wasn’t available for viewing at the time of this writing, so “MURDER BY THE BOOK” is the latest example of Spielberg’s episodic work.  However, it is appropriate given the fact that it was his work on COLUMBO that directly resulted in Spielberg being hired for the television film DUEL (1971).  To him, it was just another TV gig, but fate had other plans.

COLUMBO: “MURDER BY THE BOOK” is available on standard definition DVD from Universal as part of the Season 1 collection.