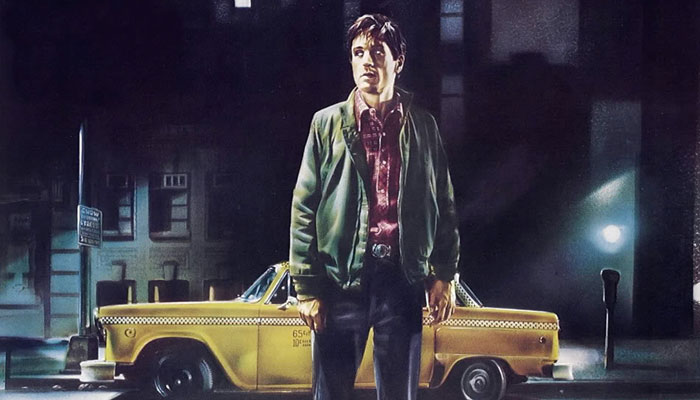 Added to the National Film Registry in 1994

I’ve always believed that great art is born from a place of deprivation.  The state of needing something—love, companionship, comfort, etc.—can result in greater urgency and intensity on behalf of the person expressing an idea.  Conversely, some of the most banal, meaningless art comes from a place of complacency—simply collecting a paycheck.  One of the most influential films of the 1970’s, director Martin Scorsese’s TAXI DRIVER (1976), was born of deep, existential deprivation.  Writer Paul Schrader wrote the screenplay during a very turbulent time in his life that saw a series of escalating mishaps turn him into something of a recluse.  Inspired by his interior monologue and self-perceived outsider status, Schrader fashioned a story about an everyday taxi driver as a study of pathological loneliness.  The script was picked up by producers Julie and Michael Phillips, and was separately brought to the attention of Scorsese by his filmmaking contemporary Brian DePalma.  By this point, Scorsese had a handful of successful features under his belt and was teaching film at his alma mater, New York University.  He strongly responded to the script, and actively campaigned for the job.  It was only after his MEAN STREETS (1973) star, Robert De Niro, won the Best Supporting Actor Oscar for his role as the young Viteo Corleone in Francis Ford Coppola’s THE GODFATHER PART II (1974) that Scorsese was able to leverage his collaboration with the actor into landing the job.  TAXI DRIVER would become a transformative project for both men, propelling them to the forefront of the contemporary cinema scene with a bold piece of work that would define not only its decade, but an entire generation.

TAXI DRIVER is striking to watch today because it depicts a New York City that simply does not exist anymore—a time before Giuliani, when crime and decay spread through the crumbling streets like a cancer.  Travis Bickle (De Niro) is an insomniac Vietnam vet without much of a social life.  He takes on a job as a cab driver working the night shift, where he can connect with the beating pulse of the city and its eclectic mix of inhabitants.  He drifts aimlessly through his days, eating junk food and going to porn theatres.  The fog lifts when he encounters a beautiful young woman named Betsy (Cybill Shepherd).  She’s put-together, elegant, and motivated—everything he’s not.  He obsesses over her, lurking outside the Presidential campaign office she works for a few days before working up the nerve to ask her out.  He bungles their first date by taking her to a porn theatre, and while he tries to regain her trust, he becomes simultaneously fixated on a child prostitute named Iris (Jodie Foster).  At first he attempts to talk her out of leaving the profession, but a growing obsession with guns, knives, and Old Testament/fire & brimstone righteousness alters the plan to include forcefully liberating her from her sexual oppressors.  Through it all, Travis Bickle is reborn as something of a vigilante—a man who will take the salvation of his beloved city into his own hands.   A man who will cleanse it with fire and blood.

Scorsese’s second collaboration with De Niro proves so sharp that it draws blood.  As the lonely sociopath at the center of the story, De Niro channels a quiet, intense sense of judgment and superiority, giving him a buzzing latent racism while abstaining from indulgences that would make the character unlikable.  The horror of the character comes in our recognition of ourselves in Travis Bickle, and De Niro is able to strike right to the heart of our deepest fears.  Fresh off his Academy Award win, De Niro showed no signs of complacency and dove headlong into the preparation of his role, to the extent that he actually drove a cab around New York City for twelve hour stretches at a time.  Foster, who was only twelve years old during filming and had previously appeared in Scorsese’s ALICE DOESN’T LIVE HERE ANYMORE (1974) plays the extremely risky and controversial role of Iris, a child prostitute who may be disillusioned and cynical through her decidedly adult activities, but still has the naiveté and innocence of a young girl.  Also returning from the pool of previous Scorsese performers is Harvey Keitel, who plays Iris’ pimp,  Sport, in a long black wig that makes him look like Tommy Wiseau.

Scorsese rounds out this trio of antisocial weirdos with otherwise normal people who seem to be visiting from another world completely.  There’s Cybill Shepherd as Betsy, the first true Scorsese blonde and an intelligent, sophisticated, and ultimately unattainable beauty.  She’s introduced wearing all white in a slow motion shot, which would become a recurring trope in Scorsese’s later work, and she also embodies the Madonna/whore complex that the director likes to give his protagonists.  There’s also comedian Al Brooks in his younger days as the ineffectual, bookish Tom—Betsy’s co-worker and a fellow Presidential candidate canvasser at the office.

Scorsese populates his day players with cameos from past collaborators both present in the flesh and absent yet alluded to.  Among the familiar faces we see are Harry Northup as a fellow taxi driver, Steven Prince as a black market arms dealer, Victor Argo as a racist shopkeeper, and Scorsese himself as a murderous, cuckolded husband.  Fleeting references are made to Kris Kristofferson, the star of Scorsese’s previous feature, as well as his parents Charles and Catherine Scorsese in a newspaper photo implying they are Iris’ parents.

TAXI DRIVER is an undeniably gritty film, and Scorsese doesn’t shy away from exposing the seediness of Travis’ surroundings in full detail.  Working with cinematographer Michael Chapman for the first time, Scorsese aims to immerse us in Bickle’s consciousness while reinforcing the character’s internal dialogue with himself that permeates the film. Bickle’s New York is rendered in a sickly, lurid yellow/green patina, echoing his solitude and mental sickness, while the camerawork mixes the documentary immediacy of handheld shooting with virtuoso flourishes like the traveling God’s eye view of Bickle’s carnage after the film’s bloody climax.  The result is a dark, expressionistic aesthetic at odds with the relative realism of Scorsese’s other crime films.

TAXI DRIVER is a fever dream of acid rain, sweat-soaked skin and cold metal, complemented perfectly by iconic composer Bernard Herrmann’s dissonant, brassy score that throbs along the long Manhattan avenues while dangling the promise of cosmopolitan happiness in the form of a sultry jazz theme.  Hermann was an Old Hollywood maestro, composer of the scores to classics like Orson Welles’ CITIZEN KANE (1941), and his hiring points to Scorsese’s deep affection for film history.  Ironically, TAXI DRIVER would be Hermann’s last work—he died only hours after returning home from the film’s final recording session.

TAXI DRIVER sees tremendous growth in the development of Scorsese’s aesthetic, especially in the evolution of his visual language.  The cinematic transgressions of the French New Wave have informed his aesthetic from the start, but TAXI DRIVER marks the point where he’s no longer content to simply steal its stylistic conceits, opting instead to run with the ball and find entirely new visual ideas all his own.  Take for instance the scene where Travis calls up Betsy and begs for a second date in the phone booth of some dingy elevator lobby.  As Travis’ pleas become more desperate and pathetic, Scorsese simply dollies the camera away from his original composition to look down the length of an empty hallway instead—as if we are physically looking away from the embarrassment of Travis’ phone call.  There’s also a scene in an all-night diner where Travis zeroes in on the alka-seltzer tablet dissolving in his glass of water.  It’s a trivial detail, ultimately unimportant to the scene, but Scorsese slowly zooms in on the violent bubbles until they fill the screen.   Scorsese has said publicly that the shot was inspired by a Jean-Luc Godard film, but here the technique takes on a life of its own, becoming a rich metaphor for the bottled fury bubbling up under Travis’ calm exterior.

In retrospect, it’s hard to imagine anyone else but Scorsese directing TAXI DRIVER—its subject matter falls in line so squarely with his aesthetic fascinations that one could be forgiven he wrote the screenplay from his own idea.  There’s the New York setting (Schrader’s original script placed the action in Los Angeles), the unflinching portrayal of seedy urban life and the use of antiheroes and/or criminals as protagonists.  TAXI DRIVER takes this latter point to its ironic conclusion, with the media hailing Travis as a hero after a violent rampage that leaves Sport and his colleagues dead, whereas if he’d only been a little more organized in his earlier assassination attempt of Presidential candidate Palantine, he’d be condemned as a villain.  While Travis does not share the Roman Catholic heritage of previous Scorsese protagonists, his inner convictions take on a somewhat religious bent and provide him with an almost biblical desire to purge the city of filth and sin.

TAXI DRIVER is easily Scorsese’s most darkly disturbing film when it comes to depictions of violence onscreen.  While the action is staged in the chaotic, unorganized way that Scorsese is known for, it is rendered in exaggerated form.  Bullet wounds don’t just cause bleeding—they cause profuse bleeding.  Hands don’t just absorb a gunshot– they blow apart into millions of pieces.  It’s not enough to kill somebody with a single shot—it takes several.  Indeed, it’s because of TAXI DRIVER’s bloodbath finale that Scorsese found himself having to deal with real censorship for the first time.  To avoid an X rating that would doom the film before it was ever released, he had to desaturate the colors during the climax so the blood wouldn’t be so bright and red.

When it was released in 1976, TAXI DRIVER was met with healthy box office numbers, heaps of critical praise, and even some prestigious awards like the Cannes Palme d’Or.  It was, without a doubt, Scorsese’s biggest success to that date.  When the Academy Awards came around, it was rewarded with nominations for Best Picture, Best Actor (De Niro), Best Supporting Actress (Foster), and Best Original Score.  TAXI DRIVER is something of an apex in terms of the kind of gritty dramas that Hollywood made in the 1970’s, but by 1976, the tide was turning against them—Steven Spielberg released the first modern blockbuster JAWS the year prior, and George Lucas would essentially blows the doors wide open the following year with STAR WARS.

In the decades since its release, TAXI DRIVER’s legacy has continued to grow, positioning itself as a critical film within Scorsese’s filmography.  Several of its scenes would become iconic in cinema history, especially the “You Talkin’ To Me?” scene that everybody and their mother has imitated at some point or another.  On a more unfortunate note, the film would go on to inspire vigilante actions in the real world, with the most famous case being John Hinckley’s attempted assassination of President Ronald Reagan—all so he could impress Jodie Foster.  Nevertheless, TAXI DRIVER’s importance to the film medium cannot be overstated, and in 1994 it was inducted into the National Film Registry for preservation, ensuring the perpetuity of Scorsese’s first true masterpiece.