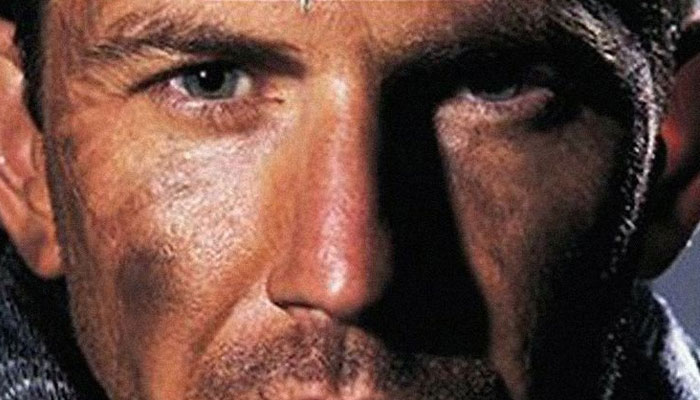 The year 1990 saw the release of two feature films from Tony Scott.  The first, DAYS OF THUNDER, was met with significant box office success, but his far stronger effort that year was REVENGE.  It’s a much smaller, moodier film, but Scott still imbues it with his unique sense of style and edginess.  It’s not a great film by any means, and it certainly hasn’t earned quite the cache that his bigger movies have, but with REVENGE, Scott shows he’s at home with small thrillers as much as he is big action spectacle.

REVENGE is the story of Michael “Jay” Cochran (Kevin Costner), an ex-Navy fighter pilot who spends his first few weeks of retirement in Mexico under the hospitality of a wealthy Mexican businessman and close friend, Tiburon Mendez.  When he finds himself falling for Mendez’ beautiful wife, Miryea, he goes against his own personal convictions to begin an affair with her.  Their romance meets a tragic end when Mendez discovers the affair and attacks them.  Left for dead, Cochran is resolved to track down Miryea, who’s been sold into prostitution, as well as take revenge on Mendez himself.

REVENGE deals in extremely murky morals, which I found to be quite refreshing.  Costner is first presented as a principle, rather vanilla guy who loves his dog and his country.  He at first resists Miryea’s advances, but then quickly (and uncharacteristically) gives in to his lust.  In doing so, he betrays his good friend and Miryea’s husband, yet we’re still expected to sympathize with him.  When the time comes for him to hunt Mendez down in revenge for nearly killing him, it creates conflicted feelings for the audience– why are we rooting for a guy to get revenge when he was the one who did the wrong in the first place?

This strange dynamic is tempered by an antagonist who is only lashing out because an unspeakable wrong was originally done to him.  Anthony Quinn plays Mendez as a sophisticated, Mexican gentleman of wealth and loyalty.  Sure, he’s got a history of being unhinged and is seen to go a little bit too far in his business dealings (assassinating business associates and going completely apeshit on Cochran’s countryside cabin), but throughout it all he’s a man who values integrity and respect.  Those are his operating principles, and it makes him a sympathetic villain while also maintaining the sympathy of Cochran.  It all reads as an inevitable collision of two runaway trains.

Madeline Stowe is effective as Miryea, Mendez’ wife and Cochran’s lover.  It’s tragic to see the consequences of her actions unfold.  I was only recently made aware of Stowe as an actress, previously seeing her for the first time in Michael Mann’s THE LAST OF THE MOHICANS (1992).  I was definitely more impressed with her tragic performance in REVENGE.  The rest of the cast is filled out with actors I don’t particularly recognize, although John Leguizamo makes a baby-faced appearance in one of his earliest film roles here.

Behind the camera, Scott re-teams with Jeffrey Kimball, who again serves as Director of Photography.  Together, they replicate Scott’s trademark look: high contrast, dramatic skies, and extremely saturated colors skewed towards the orange spectrum.  With REVENGE, however, Scott starts experimenting with drastic coloring– a style he would adopt fully in his later 2000’s features.  He paints the Mexican landscape and searing heat in an unrelenting, aggressive orange tint.  The camera-work follows suit with his previous films– low-key and languorous (with the exception of the action sequences).  Other Scott fingerprints include the use of intense light streaming through curtains and venetian blinds and a fighter jet sequence that recalls the action of TOP GUN (1986).

Jack Nitzsche provides a forgettable soundtrack, but from what I remember of it, it sustained the tone of the picture without intruding on it.