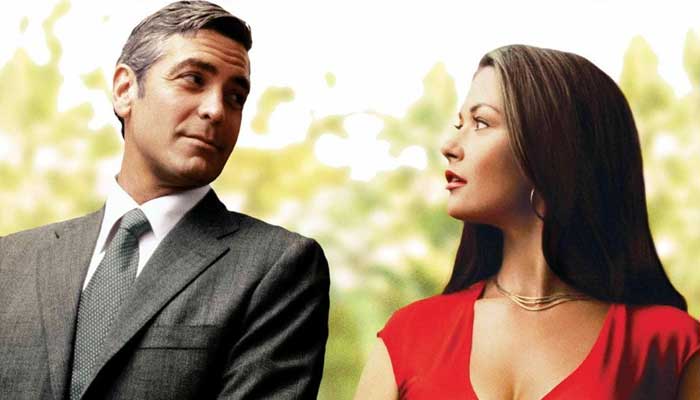 The Coen Brothers are generally regarded as two of the finest living American filmmakers.  Each of their films has been released to some modicum of critical acclaim and/or box office success.  However, they are people like you and I, and are prone to mistakes.  Every career has its mis-step, and the Coens’ tenth feature– 2003’s INTOLERABLE CRUELTY– is just that.

Drawing inspiration from Howard Hawks romantic comedies like BRINGING UP BABY (1938), INTOLERABLE CRUELTYis an old-fashioned love romp cursed with a modern-day cynic’s attitude.  Miles Massey (George Clooney) is a devilishly handsome and slick matrimony lawyer who’s built his career upon a foolproof prenuptial document of his own devising.  He’s used to winning, and has the fancy car and huge Beverly Hills mansion to prove it.  He finally meets his match in the form of Marilyn Rexroth (Catherine Zeta-Jones) a woman who’s made a career out of marrying rich men and divorcing them for a hefty profit.  As he represents Marilyn’s husband Rex Rexroth (Edward Herrmann) in the divorce proceedings, Miles finds himself falling hard for the alluring wife.  After a brief barely-romance, Miles and Marilyn marry in a Vegas drive-thru chapel.  But is it true love, or is Miles just another target in Marilyn’s treacherous scheme?

The film’s performances draw heavily from the slapstick romantic comedies of yore.  Clooney and Zeta-Jones’ chemistry plays like a forgotten James Stewart/Katherine Hepburn film, yet despite their best efforts, the film doesn’t quite pull it off.  In his second Coen outing, Clooney lampoons his suave, star persona quite well.  His vanity is manifested in physical traits like obsessively checking his teeth, a recurring joke that is one of the movie’s more brilliant aspects.  It’s clear that he’s having a lot of fun, and his enjoyment is infectious.  As the shrewd, calculating Marilyn, Zeta-Jones is a worthy adversary to Clooney’s charms.  The role requires someone with effortless grace, beauty, and sexuality– all of which Zeta-Jones possesses in spades.  It’s a serviceable performance, if only because the role itself doesn’t require much in the way of involved acting ability.  For what the film is and what it aspires to be, the casting of the two leads is pitch perfect.

The supporting cast allows the chance for the Coens to trot out their signature outsized characters.  Billy Bob Thornton, who last starred for the Coens in their previous film (2001’s THE MAN WHO WASN’T THERE) plays Howard Doyle, a Texan oil baron and one sucker in a long line of them competing for Marilyn’s fake affections.  His role is the polar opposite to his laconic, nearly-mute barber in THE MAN WHO WASN’T THERE, a casting technique that the Coens are fond of (see the dichotomy between Steve Buscemi’s roles in FARGO (1996) and THE BIG LEBOWSKI (1998).  Geoffrey Rush plays Donovan Donaly, a ponytailed television producer who goes on a wild shooting rampage when he comes home early to catch his wife in bed with the pool boy (which is odd because they have no pool).  Rush embraces the full-tilt psychopath aspects of his unhinged character to considerable comedic effect, and is one of the standout performers in the film.

Cedric The Entertainer plays Gus Petch, a private investigator specializing in philandering husbands.  His catchprase, “I’m gonna nail yo’ ass”, is invoked in almost every other line.  It’s an energetic, memorable performance, but I don’t know if you can really call it a performance when Cedric The Entertainer is essentially just being himself.  Richard Jenkins, who appeared alongside Thornton for the Coens in THE MAN WHO WASN’T THERE, shows an unexpected knack for comedic timing in his depiction of Freddy Bender, Marilyn’s impotent and perpetually-aggravated lawyer.  A few other Coen cameos clue us in that INTOLERABLE CRUELTY exists within their winking, self-contained universe: Bruce Campbell appears as a surgeon on a television screen and the man who plays Mortimer Young (of the infamously fictional Forever Young film preservation society concocted by the Coens as a skewering of pretentious cinephiles) makes his first in-film appearance for the Coens as a curmudgeonly lawyer.

INTOLERABLE CRUELTY conscripts regular Coen cinematographer Roger Deakins into service once again.  Shooting on 35mm film, Deakins evokes the bright, cheery visuals of romantic comedies past.  The sun-dappled environs of Los Angeles and Las Vegas are rendered within the 1.85:1 frame with warm color tones and a high-key/somewhat overlit lighting scheme.  The film makes extensive use of handheld cinematography in the opening sequence, while opting for a more traditional locked-off/dolly/crane scheme for the remaining scenes.  It hurts me to say this, but this is perhaps Deakins’ worst-looking film.  That’s not to say it looks bad, but only that it is uncharacteristically bland and pedestrian.  It gets the job done, but I’m sure Deakins won’t be putting it in the proverbial reel anytime soon.

This time around, the Coens swap their usual production designer, Dennis Gassner, for Leslie McDonald.  McDonald does a commendable job recreating the privileged lifestyles of Los Angeles’ elite, imbuing the film with a stuffy old-money sensibility.  Her work is not unimpressive, but neither is it impressive.  It, like most of the movie, is bland, middle-of-the-road journeyman stuff.  Hardly the eccentric, nuanced design we’ve come to expect from a Coen Brothers film.

Carter Burwell returns to score the film, utilizing a brassy, big-band sound that further alludes to Hollywood Golden Age comedies.  His music is accompanied by a generic mix of folk rock offered up by the likes of Simon & Garfunkel.  It makes the film more enjoyable, to be sure, but it rarely makes for a transcendent experience.

There is one instance of what seems to be genuine inspiration here:  the Monty Python-esque opening credits that animate Victorian paintings of Cupid and couples in love.  However, it’s not enough to save the film from its lackluster execution.  Many signature Coen conceits are present, like their fondness for Buster Keaton-style slapstick.  Their dark sense of humor is also incorporated, but to substantially diluted effect.  The whole thing seems to have the stink of big studio meddling about it, from well-known producers like Brian Grazer and Grant Heslov on the payroll, on down to a screenplay in which the Coens had to share credit with no less than three other writers.

Considering the strength of their earlier films, INTOLERABLE CRUELTY is a major disappointment.  It seems that I wasn’t alone in my thinking– the film bombed upon its release and was not warmly received by critics.  I don’t know if the Coens just weren’t trying this particular go-round, but something is very noticeably off about their execution.  Ten years after its release, it’s been all but forgotten– denied even a small cult following like the ones that cropped up around many of their other lesser films.  Every filmmaker has a mis-step in his/her career, but because this is the Coen Brothers we’re talking about, INTOLERABLE CRUELTY is a nearly-unforgivable transgression by virtue of its indifference– arguably the biggest filmmaking sin of them all.